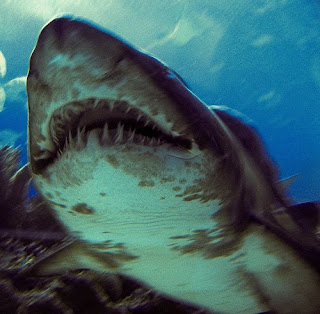 Every July and August, the Discovery Channel unleashes "Shark Week" on its bloodthirsty viewers. Since 1987, the cable network has had a ratings boon with back-to-back programming that focuses on the sea dogs at their most fascinating. Discovery dives into the annual event this Sunday night with the two-hour premiere "Blood in the Water," which tells the true-life story that inspired the movie "Jaws." And if you can't get enough, tune in over the course of the week for specials like "Deadly Waters," "Sharkbite Summer," and "Great White Appetite." We're so excited that we decided to brush up on our "Shark Week" trivia by taking a look at the popular series, the real-life fish, and their greatest pop-culture brethren.

"Shark Week" freaks people out. Some say that attendance at Florida beaches declines every year following the Discovery Channel's fear-inducing extravaganza. And there are lots of scientists and fin aficionados who aren't terribly happy about it. Organizations like the Shark Group and Let Sharks Live Network back a petition that calls for a boycott of "Shark Week" altogether, saying the "horror shows" portray sharks dishonestly. Meanwhile, Discovery maintains that it highlights the complex relationship between sharks and humans. To prove its love for these aquatic predators, the channel has teamed with the Ocean Conservancy, Sen. John Kerry, and Planet Green to raise awareness of shark-related issues, from overfishing and habitat loss, illegal shark finning practices, and ways that people can help sharks at sea.

When a young director named Steven Spielberg was shooting his breakout blockbuster hit "Jaws," he decided to give the mechanical star of the film an unusual nickname. Bruce the shark was christened after Spielberg's attorney, Bruce Ramer. And while the ferocious fish in the film met an untimely demise, the 75-year-old attorney is still going strong with a client list that includes Clint Eastwood and George Clooney.

Which Is Deadlier: Sharks or Coconuts?

This is one of those Internet myths that seems to have spiraled out of control over the years. And while the origins are sketchy and the facts somewhat unclear, here's the gist of it. Falling coconuts allegedly kill about 150 people worldwide per year (not a particularly well-documented number by any stretch, but one that's bandied about nonetheless). Sharks attack about 50 to 70 people worldwide every year, but only about five to 15 of them actually die. Therefore, if you believe the facts floating around the Web, coconuts kill 10 times as many people annually as sharks. And if you want to keep it all in perspective, some reports estimate as many as 100 million sharks die each year due to fishing.

"Deep Blue Sea" is one of our favorite bad movies ever. With dialogue as powerful as "You think water's fast. You should see ice. It moves like it has a mind. Like it knows it killed the world once and got a taste for murder," what's not to like? And while it's inevitably compared to the mother of all shark flicks, "Jaws," it's not a rip-off of its predecessor. Come on, the sharks in "DBS" are genetically altered thinking sharks -- that alone sets it apart. Still, the filmmakers did pay homage to the originator in their own way. The three sharks that die in the film go out in the same way and in the same order as those in "Jaws," "Jaws 2," and "Jaws 3-D." The first is blown-up with a compressed gas canister, the second is electrocuted when it bites a live wire, and the third erupts with a bomb. If it ain't broke, don't fix it.

Ways To Avoid a Shark Attack

There are lots of ways to avoid being attacked by a shark besides simply sticking to lakes, swimming pools, and bathtubs. Here are some of the most important to keep in mind:

* Don't go to a place where you know sharks have already attacked other humans or where warning signs are posted.

* Don't swim at dusk or dawn when sharks are most active and on the hunt for food.

* Stay out of muddy waters where predators like bull sharks are most likely to find you.

* Don't wear bright colors or sparkly jewelry that will catch the creatures' attention. Surprisingly, sharks can see contrast quite well.

* If you have an open wound and are bleeding, stay out of the sea.

* Stay in groups whenever possible, sharks are more likely to go after solo swimmers when they're on the prowl.

Pop Him Right in the Nose

So let's say you're one of the unlucky ones or you've ignored our very important advice and you find yourself face-to-face with a shark on the hunt. First of all, try to swim away quietly (and, obviously, quickly) and you may be OK. If you're with a group, swim close to them, or, if you're alone, try to make yourself look bigger -- the shark might get intimidated by what it thinks is a bigger fish. If the shark ends up attacking, remember this crucial information. These powerful fish are more sensitive than you might expect, and if you hit them hard in the nose or near their eyes, they just might swim away.

"Thunderball" was Sean Connery's fourth film as super spy James Bond but it could have been his last. While the studly star was filming a scene with the villain Largo's sharks, the man-eaters were actually able to jump over the 3-feet-high Plexiglas partitions separating them from the movie star. In commentary on the film, director Terence Young reported that Connery's frightened reaction shots didn't require a whole lot of acting. Luckily Connery left the pool unscathed and went on to be Bond again in 1967's "You Only Live Twice" and 1971's "Diamonds Are Forever."

The Discovery Channel loves Shark Week. In fact, it's satisfied with the annual TV attack that in 2006, the channel wore its pride on its building with the help of CMEANN Productions, which created a giant inflatable shark that hung from Discovery headquarters in Silver Spring, Maryland. The enormous fish head alone was 50 feet long, and the dorsal fin that towered over the town was 40 feet high. But the most impressive shark part was the tail, which measured 70 feet in length and sprawled across seven stories.

Remember Jabberjaw, the cartoon shark who sounded an awful lot like Curly from "The Three Stooges"? Well, back in 1976, Hanna-Barbera wanted to capitalize on the success of "Jaws." What better way to do it than to have an animated great white shark play drums in a "Josie and the Pussycats"-esque rock band called the Neptunes, travel the underwater world, and help thwart diabolical plots to control the seas? Why didn't Jabberjaw have the mega-success of Spielberg's film? As the subaquatic percussionist himself would say, "No respect!"

Sharks Not So Agile

Sharks may be fierce, but they're not all that agile. In fact, they can't grind to a halt and they can't back up because their inflexible fins don't bend upward. So how does a shark swim backward? They let gravity take effect and turn while they fall through the water. And if they want to avoid bumping into something, they swerve to miss it rather than making a quick stop.

Posted by Pop Culture Passionistas at 9:59 AM