Still Rooting for Kelly Osbourne on "Dancing with the Stars" 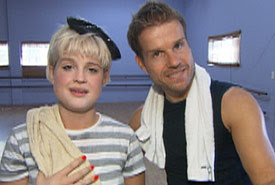 We predicted on the first night of "Dancing with the Stars" that this season Kelly Osbourne would take the whole thing. Not ones to go back on a prediction, we stand by that choice, although quite honestly, we know it's anybody's game. We can't remember a season of the show where the talent level in the race was so close.

We all know the truth: Kelly is the weakest dancer left. But she's grown more than anyone else, which is really what this show should be about. You've got Donny Osmond and Aaron Carter, who've been performing since they were in diapers. And Mya was taking dancing classes at age two. Even supermodel Joanna Krupa went to ballet lessons as a kid. Kelly has had a mildly successful music career where she pogo-ed around onstage, but she's clearly the underdog in this competition. And that's why we're rooting for her.


We also just love the idea of seeing Ozzy in the audience of a ballroom dance show — the proud, somewhat incoherent papa cheering on his tattooed little girl. But Ozzy and Sharon have been MIA the last few weeks. We wonder if her folks were just making her too nervous. Is it an odd coincidence that she's gotten better in their absence?

Rumor is that Sharon is laying low after trashing "Britain's Got Talent's" Susan Boyle, saying that "God slapped her with an ugly stick" — and that was the nicest part of her profanity-laced slam. Chat rooms are buzzing that Sharon's slip has lost votes for Kelly. Boyle is the guest performer on tonight's result show... a fluke or a planned PR move? And will Sharon be there to kiss and make up with Susan and cheer on Kelly?

With or without Sharon and Ozzy, Kelly has seemed to overcome her nerves in the last few weeks. Last night, judge Len Goodman called her "a revelation," and continued the praise by telling her, "week after week, you get stronger and stronger."

In a recent interview, Kelly said her partner, Louis Van Amstel, cracked the whip big time and that this week he deprived her of all of her distractions, including cell phones, visitors, and fluffy little puff-ball puppies. It paid off, pretty much. Kelly landed in the middle of the leader board, with a 25 for her graceful (really!) Fox Trot and a 26 for her '60s-inspired Jive.

But it's Kelly and Louis' chemistry that seems to put them over the top. They say they've become fast friends (as unlikely a pair as they may seem) and have even spoken about working together in the future, maybe teaming up to do a musical. Let's see if they make it past the upcoming elimination before we start selling tickets to the Broadway extravaganza.

Kelly, the underdog, may be the one to hang up her "Dancing" shoes, but we hope not. Tonight will tell. So, fast-forward through the Sabrina Bryan "Design a Dance" Paso Doble, and skip right past what promises to be a very annoying performance by Michael Buble and get to the results already (we do suggest you pause for a few bars of Susan Boyle and every second of "Dance Center" with Len Goodman, Jerry Rice, and Kenny Mayne... those guys crack us up). Fingers crossed, Kelly!

Written by Amy & Nancy Harrington
Originally for Sodahead.com
Posted by Pop Culture Passionistas at 8:47 AM