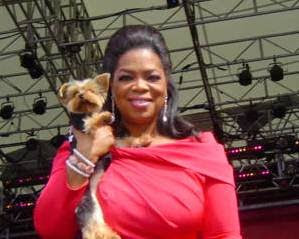 Celebrities big and small, from William Hung to Maya Angelou, have been killed off before their times. The same day that Michael Jackson and Farrah Fawcett died, Internet rumors were flying that Jeff Goldblum fell to his death during an on-set accident in New Zealand (the same rumor had been spread about Tom Hanks in 2006 and Tom Cruise in 2008) and that Harrison Ford was lost at sea when his yacht capsized.

Luckily, none of these reports proved to be true.

Not long after, somebody hacked into Britney's Twitter account and posted this message, "Britney has passed today. It is a sad day for everyone. More news to come."

The news is this: not only is Britney alive, so are Ellen DeGeneres and P. Diddy (whose accounts were also hacked), as well as George Clooney, Kanye West, and Rick Astley.

Here are some of the most legendary stories of other celebrities who've lived through rumors of their untimely demise.

Oprah Winfrey: R.I.P. Hoax 2009
In 2009 it was reported that talk show queen Oprah Winfrey was found sprawled across her bed, dead in her Chicago apartment. Oprah was, of course, alive and kicking. The groups Anonymous and 4chan allegedly started the hoax, but L.A. comedy troupe Team Tiger Awesome is running with the notion. They have an upcoming show on Comedy Central called "Oprah Is Dead," which looks at the bleak landscape of a post-Oprah-lypitc world.

Miley Cyrus: R.I.P. Hoax 2008
False reports surfaced on the Internet on September 6, 2008, that Miley Cyrus had died in a hit-and- run accident on her way to the "Hannah Montana" set. Luckily for tween pop fans everywhere, the story was bogus. Miley isn't the first star to be the subject of the fatal-car-accident rumor. Others include Justin Timberlake and Britney Spears (who allegedly died together in a crash in 2001), Eminem (who supposedly left us in 2000), Scott Baio (whose accident was purportedly the same day as Chris Farley's actual death in 1997), and "Saved by the Bell's" Mark-Paul Gosselaar and Mario Lopez (whose fake collision was reported in 1993).

Paris Hilton: R.I.P. Hoax 2007
Whoever wanted people to think Paris Hilton was dead in 2007 REALLY wanted people to think she was dead. They went to the trouble of creating a bogus news story that looked like an official CNN.com page. Disconcerted by the fact that Paris' DUI prison sentence was front-page news, MyCoalProductions.com creator Michael Burke posted the fake story that Hilton had been stabbed multiple times by a angry fellow inmate. What a jokester.

Will Ferrell: R.I.P. Hoax 2006
On March 14, 2006, an anonymous i-Newswire user posted a phony story that Will Ferrell died in a paragliding accident when an unexpected 60-mile-an-hour wind kicked up, threw the comic actor off course, and sent him into a dense forest along with his instructor. The story was so detailed, it included his professional guide's name (Horarcio Gomez), the hospital they were taken to (UCSD Thornton), and a quote from Will's parents, who said he died doing "one of the things he loved the most."

Dave Grohl: R.I.P. Hoax 2006
Foo Fighters' frontman Dave Grohl has been the victim of a couple of Internet death hoaxes. In 2006 conspiracy theories were already surfacing about the cause of his demise, before Grohl had a chance to come forward and announce he was still very much alive. As always, Dave maintained his sense of humor, stating in an NME magazine cover story, "I'm like a cockroach - don't worry, I'll be around for a long time."

William Hung: R.I.P. Hoax 2004
Could anybody really believe that the innocently naive "American Idol" reject William Hung was a secret heroin addict? Apparently lots of people bought the notion that the "She Bangs"-botcher had a dark side and the story that he was found post-overdose by a VH1 "Behind the Music" camera crew. Satirical site Broken Newz fabricated the tale. No word on whether or not Hung (who had become the butt of everyone's jokes at the time) found it funny.

Johnny Knoxville: R.I.P. Hoax 2002
It seemed like only a matter of time before "Jackass" daredevil Johnny Knoxville would fall victim to a Web death rumor. But when it came, the details of his supposed demise were bizarrely believable given the nature of the jester's unorthodox stunts. The story went that Johnny died when his parachute failed to open while he was skydiving from a biplane... and eating from a giant jar of baked beans. You gotta admit, if anyone was going to go that way, it would be Johnny.

Lou Reed: R.I.P. Hoax 2001
Anybody gullible enough to believe that Velvet Underground frontman Lou Reed had died of a drug overdose in 2001 is probably still be sitting around waiting for the release of the album he was allegedly recording at the time, "Angels Fly Far from Heaven Here." Good news, bad news for Reed fans – Lou's alive, but no such record was ever recorded.

James Earl Jones: R.I.P. Hoax 1998
Fact-checking can be a matter of life and death. Such was the case for James Earl Jones in 1998, when Pittsburgh Pirates announcer Lanny Frattare accidentally said the voice behind Darth Vader had died, when, in fact, it was Martin Luther King, Jr.'s assassin, James Earl Ray, who'd passed away.

Abe Vigoda: R.I.P. Hoax 1982
Doesn't it seem like Abe Vigoda has been 90 for like 50 years? In fact, the actor was just 54-years-old when he played Fish on "Barney Miller." Still, it wasn't entirely unexpected when People magazine reported in 1982 that Abe was dead. Only problem, he wasn't. So Vigoda decided to make a joke out of the whole mess and posed in a coffin, clutching the magazine that professed his demise. All seemed OK until 1987, when a New Jersey anchorwoman referred to the "late Abe Vigoda" on the nightly news. Oops... still breathing. Since then lots has been made of the fact that Abe is still alive. He's joked about it with David Letterman and Conan O'Brien. Singer-songwriter Greg Galcik recorded the tribute "Abe Vigoda's Dead." And the Website abevigoda.com keeps a 24-hour clock tracking the actor's status. And in case you're wondering – as of right this very second, Abe is doing just fine.

Jerry Mathers: R.I.P. Hoax 1969
Devotees of all things wholesome must have been devastated when they heard that Jerry Mathers had died in combat during the Vietnam War. The legend began that a Private J. Mathers was allegedly killed in action. The "Leave It to Beaver" star had tried to enroll in the Marines but was turned down (reportedly because they didn't want to risk the negative publicity that would surround the death of such a famous person). But he did join the Air Force Reserve, where he served in the States and appeared in uniform on the 1967 Emmy Awards, an image that undoubtedly fueled the rumors when they began to spread.

Paul McCartney: R.I.P. Hoax 1966
The most famous celebrity death hoax of all time is that the Beatles' Paul McCartney died in a car accident in 1966 and was replaced by a look-alike. Although the story originated in the Drake University paper in September 1969, it spread across the globe following a Michigan radio show broadcast just a few weeks later. Conspiracy theorists have pointed to the many clues proving the Beatle's death, including lyrical hints ("He didn't notice that the lights had changed" from "A Day in the Life"), record cover evidence (Paul walks shoeless and out of step with his bandmates on the "Abbey Road" cover), and audible smoking guns (some say they hear the words, "Turn me on, dead man" when playing "Revolution Nine" backward).


Written by Amy and Nancy Harrington
Originally for GetBack.com

Posted by Pop Culture Passionistas at 8:43 AM