Best and Worst Movie Remakes Ever 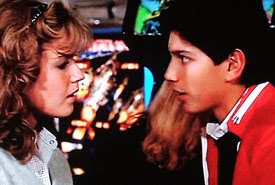 If you haven't seen it, the trailer is now out for the upcoming "Karate Kid" remake starring Jaden Smith and Jackie Chan. From what we've seen, Jaden is no Ralph Macchio, and Jackie Chan could never hold a candle to Pat Morita. But it's got to be hard starring in a remake of a beloved classic. The new actors often have big shoes to fill, and all of the technical advancements in the world won't guarantee the film will be better than the original. We admit that it was tough to find many sequels that fared better than their predecessors, but we did find a few. Here's our list of the best and worst movie remakes ever.

(1991)
It's a little easier to re-create a film that was not a huge hit to begin with. Maybe that's why Martin Scorsese chose "Cape Fear" as his first attempt at a remake. The 1962 original starring Robert Mitchum, Gregory Peck, and Lori Martin was a low-budget, black-and-white B-movie. Scorsese reworked the plot and made a $34 million contemporary classic. Robert De Niro's stellar and disturbing performance as the psychotic revenge-seeking ex-con met the challenge of Scorsese's study of good vs. evil, truth vs. deceit, and salvation vs. damnation. Of course, the breakout star of the film was the young Juliette Lewis, whose bone-chilling scenes with De Niro have been forever embedded in our minds.

BEST: "Father of the Bride"

(1991)
The updated "Father of the Bride" succeeded in improving on the original for a few key reasons. First and foremost, time was on its side. Enough decades had passed between the two versions that few people remembered the 1950 film starring Spencer Tracy and the stunningly beautiful 18-year-old Elizabeth Taylor. Secondly, the new "Father" was Steve Martin. While Tracy was himself a classic, his portrayal of Stanley Banks was much more buttoned-up and liquored-up than the loose physical comedy Martin specializes in. In addition, the remake possessed a secret weapon: Martin Short as wedding planner extraordinaire Franck Eggelhoffer, who discussed things like the "kak" with "Jo Bunk" — which translated to the "cake with George Banks." It was Short's outrageous performance and his chemistry with Martin that edged the remake slightly ahead of the original.

(2005)
No one can beat Mel Brooks at his own game, except for maybe Mel Brooks. If anyone else had tried, they most definitely would have failed, but Brooks took on the task of besting an already genius movie and succeeded. He started by making his 1968 film "The Producers" into a Broadway show and hiring two of the best stage performers working — Nathan Lane and Matthew Broderick — to play the Zero Mostel and Gene Wilder parts. That's about as fair a match as you can get. When the play became a huge success, winning a record-breaking 12 Tony awards, the only logical thing to do was to make it a movie. Oh wait, they already did that. Well, they'll do it again, and they'll do it better. Lane and Broderick agreed to reprise their roles, and for that touch of Hollywood box-office mega-power, they signed on Uma Thurman as Ulla and Will Ferrell as Franz Liebkind. While we can't admit that it is better than Mel's first romp with Adolph in Berchtesgaden, we will go on record that it equals its predecessor.

(2005)
The original "King Kong" is one of our favorite movies of all time. As kids, we would watch it over and over again, riveted by the angry ape and the blonde Fay Wray. Then we grew up and realized that the "Kong" that had captured our imaginations and our hearts as little girls was really a puppet — and a pretty stiffly animated one at that. Don't get us wrong, the movie is still one of our top all-time sentimental choices.

The plot and script of Peter Jackson's 2005 "Kong" is pretty horrific, and not in a good way. But what makes the new "KK" better than the original is the absolutely breathtaking animation of the great ape himself. When his face fills the big screen, and he looks lovingly down at Naomi Watts, our hearts (and enchantment with the original film) were shattered.

(2001)
The members of the Rat Pack will always be the hippest cats who ever lived. No one can hold a candle to Frank Sinatra, Dean Martin, Sammy Davis, Jr., Peter Lawford, and Joey Bishop. (OK, a lot of guys can hold a candle to Joey Bishop, but that's not important right now.) Still, the original "Ocean's Eleven" is a pretty cheesy movie, to say the least.

Sure, we may look back at the 2001 Steven Soderbergh remake in 40 years and think the same thing – those clothes are cool but dated, the plot is so contrived, the guys really aren't the greatest actors in the world — but we doubt it. We think that Clooney and Pitt will stand the test of time in this cinematic romp a little bit better than Frank and Dean (who were clearly just looking to have a good time in Vegas). And the remake has the added bonus of Carl Reiner's comedic genius. On the other hand, we're positive that "Ocean's 12" and "13" won't be making a best-of anything list.

(1998)
This was a bad idea on paper and an even worse one in execution. Take 1960's "Psycho," one of the greatest thrillers of all time with one of the most memorable scenes (in or out of the shower) EVER, and remake it, shot-for-shot. Oh, and cast Vince Vaughn in the role created by the King of Creepy, Anthony Perkins, and (we still shudder to think) Anne Heche in Janet Leigh's Oscar-nominated role. That is a scary idea, but not in the way the filmmaker intended. Well, if you needed proof that Gus Van Sant is no Alfred Hitchock, this is it. Van Sant eventually dug himself out of the doghouse, but it took him ten years to redeem himself with the very well crafted (and cast) movie "Milk."

WORST: "Planet of the Apes"

(2001)
1968's "Planet of the Apes" ranks as one of our favorite movies of all time, and we doubt it will ever get knocked from that perch. So when we heard they were remaking the film, we knew it would never surpass the original, but with Tim Burton at the helm, we were still intrigued by the prospect of a re-imagined ape world. It's safe to say we have never been so disappointed by a movie — ever. It lacked the signature colorful and warped style of typical Tim Burton fare. Anyone could have made this sci-fi flick, but we wanted to see Burton's stamp all over it. And while master of prosthetic illusion Rick Baker's makeup was more realistic perhaps than the original John Chambers' ape faces, we still prefer the charm of Roddy McDowall's twitchy little nose. Tim Burton staple, and now wife, Helena Bonham Carter, was respectable as Ari, the ape-turned-human rights fighter, but no one can compare to Kim Hunter as Zira. And Marky Mark? Let's just say, he's no Charlton Heston and leave it at that. We will never forget the chills we got the first time we saw George Taylor round the corner on his horse to discover the fragmented remains of the Statue of Liberty. Nothing can surpass it. No one should even try.

WORST: "Charlie and the Chocolate Factory"

(2005)
We thought Tim Burton had learned his lesson with the "Planet of the Apes" debacle in 2001, but then came the news that he was going to take a stab at the king of confections by remaking the 1971 classic "Willy Wonka & the Chocolate Factory." Coincidentally, the original film is also on our all-time favorite movie list — guess we have very similar taste to Mr. Burton. We do love other his movies, from "Beetle Juice to "Big Fish." Plus, Burton had the incredible good fortune to cast his go-to actor, Mr. Johnny Depp, who was now a Hollywood star, thanks to his Captain Jack Sparrow. "OK," we thought, "this one MIGHT work." Depp and Burton, back together with a great story. Unstoppable, right? So with much anticipation, but still harboring the emotional scars left by Burton's apes, we went to see "Charlie and the Chocolate Factory." We won't bore you with the details (except to ask, what was with the new Oompa Loompa tune?). We just want to leave Burton with a few words of advice as he chooses future projects: Tim, if it ain't broke, don't fix it.

(2006)
You would think it would be easy to remake a really schlocky action flick like 1972's "The Poseidon Adventure" and do a better job of it. But when you look at the original, you realize a few things. The cast is spectacular – Gene Hackman, Ernest Borgnine, Red Buttons, Roddy McDowall, Jack Albertson, and Shelley Winters had won seven Oscars between them. The special effects, for their day, were state-of-the-art. And the plot was actually pretty compelling. It's one of the best disaster flicks of the '70s.

The 2006 remake held a lot of promise. After all, if any director knew how to work in water, it was Wolfgang Petersen, who'd already helmed "Das Boot" and "The Perfect Storm." But a weak cast that included "The Real World" alum Jacinda Barrett and the most forgettable leading man around, Josh Lucas, paired with over-the-top dialogue sunk this film fast (well, not fast enough). The only saving grace were the Academy Award-nominated visual effects. But when all is said and done, it doesn't hold water in comparison to the original.

WORST: "The Out of Towners"

(1999)
If you haven't seen the original version of "The Out of Towners," you really should. Jack Lemmon is at his best as George Kellerman, a small-town guy who goes through hell during a job interview journey to New York. You'll belly laugh as his wife, played by the underrated Sandy Dennis, follows him through the fire, broken heel and all. We get why the studio decided to put out a remake 30 years later and cast the new crown prince of highbrow comedy, Steve Martin, and the always charming Goldie Hawn. Unfortunately, Jack Lemmon is the only guy we know who could pull off playing the frustrated and bombastic, but still surprisingly sympathetic, everyman-on-a- mission. The remake didn't stand a chance.