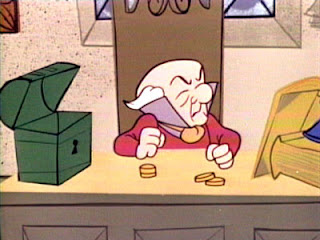 Not everyone enjoys Christmas. We all know a Scrooge - some of us are even known to be one on occasion. So on this Humbug Day, even though they probably wouldn't appreciate the hoopla, we celebrate the Top 5 Ebenezer Scrooge's in Entertainment History. God bless them. God bless them every one.

5. Michael Caine in "The Muppet Christmas Carol" (1992)
Granted, the reason that "The Muppet Christmas Carol" is so good has less to do with Michael Caine and more to do with Jim Henson's gleeful puppets. And this flick gives us the greatest delivery of the line "And, Tiny Tim... who did not die... became a second father" in any version of the story you'll ever see (thanks to Gonzo in the role of the Charles Dickens).

4. Alastair Sim in "A Christmas Carol" (1951)
Alastair's Sim "A Christmas Carol" is consistently sighted as the quintessential version of the Dickens' tale. We're not arguing. If you want a straightforward retelling of the ghostly tale (that's one without singing, Muppet's, or signing Muppet's) this is the "Scrooge" for you.

3. Bill Murray in "Scrooged" (1988)
No one plays a modern day Ebenezer Scrooge better than our generation's snarky everyman, Bill Murray. You could actually believe that Bill's the kind of guy that would give his brother a towel instead of a DVD player. John "Charlie of Charlie's Angels" Forsythe is creepy yet funny as the golf ball vomiting Lew Hayward (the Jacob Marley character). And Karen Allen, as always, makes you understand why a hard edged guy like Lumpy Cross would ultimately soften a smidgen to let a little love in his heart at Xmas time.

2. Albert Finney in "Scrooge" (1970)
There is no greater musical version of "A Christmas Carol" than 1970s "Scrooge." Among the masterful tunes on the soundtrack, our most favorite "humbuggian" ditties  are "I Hate People" and the ultra-sarcastic "Thank You Very Much." And on top of that, Albert Finney brilliantly transitions from a miserly curmudgeon to a gleefully gregarious and generous man of the people.

1. Mr. Magoo in "Mr. Magoo's Christmas Carol" (1962)
Every year it's good to have Mr. Magoo "baack...baack...baack" on our holiday viewing list in his very own version of "A Christmas Carol." The bumbling billionaire stars in this show-within-a-show version of the Dickens' classic, delivering a shockingly sensitive portrayal - seriously, his big duet of "All Alone in the World" with a young Ebbie will bring at least one tear to your eye. We only wish we could join the animated Cratchets around the tree and candle in a jar of razzleberry dressing, to enjoy a Christmas far more glorious than grand.
Posted by Pop Culture Passionistas at 12:00 AM