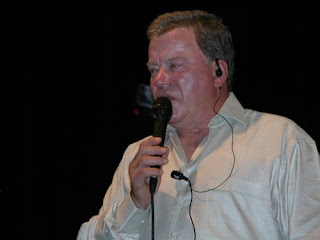 How often do you get an email with a link to the funniest video ever? We get at least a few every time we open our inboxes. Usually, we pass them by. But there are always those standouts that we forward along. Of course, others make us groan and wonder why anyone else would watch them. And so, we present our list of the the best and worst viral videos of 2009.
BEST: William Shatner Reads Sarah Palin
It's hard to go wrong with Shatner in any form. From "Rocket Man" to "Lucy in the Sky with Diamonds" he never disappoints. But perhaps his best interpretational work to date was his poetic stylings of Alaska Governor Sarah Palin's farewell speech on "The Tonight Show with Conan O'Brien."

BEST: David After the Dentist
Millions of us laughed as little David asked his dad "Is this real life?" while experiencing the high of dental anesthesia. Dad, armed with a video phone, captured his son and posted it for the world to see. It became so popular it spawned video remixes, mash-ups, and even "Is this real life?" t-shirts. Time will tell if David will be glad that his trip to get his tooth pulled will "be forever" on video.

BEST: Al Franken Draws Map of U.S.
Poor Al Franken had to wait eight months to claim his seat in the U.S. Senate after a bitterly contested election. But in this video he proves why he deserves to be on Capitol Hill. Can any other Senator do this? Bet our last president couldn't even name all 50 states, let alone draw them.

BEST: The French Bull Dog that Couldn't Roll Over
This may speak more to our love of dogs with stumpy legs and pushed in faces than the mass appeal of a viral video. But one of our favorite web postings of the year was this cute little French bulldog puppy who couldn't manage to get on his feet. His tiny grunts, as he musters up all his might, kept us laughing for hours. It only got 556,000 views on youtube and we think at least 100,000 of them were us.

BEST: Susan Boyle Shocks the World
Was there an inbox on the planet that did not receive at least one copy of the "Britian's Got Talent" shock of a lifetime in the week following Susan Boyle's April 2009 appearance? And did any one of those recipients get through the whole tune with a dry eye? We didn't. Still don't. Every time we see it, we cry like babies. According to Visible Measures the video has been viewed 221,000,000 times (one of the top five in viral video history). She dreamed a dream and we all saw it come true.

WORST: Christian Bale Freak Out
We suppose it's a little stretch to call this a viral video, since it's just audio, but it has been posted on YouTube.com and forwarded to email accounts everywhere. A sound designer captured Christian Bale on tape reaming out the director of photography who got in his way on the set of "Terminator Salvation." We'll all remember one thing — "you and me are DONE professionally."

WORST: Obama Swats a Fly
Barack Obama can't seem to catch a break. But he's pretty good at catching flies. This summer right in the midst of his six month performance review media blitz, he was all over the news. Not for his views on Iran, not for the status of his health care bill, not for his policies to combat unemployment, but for his ability to swat a fly out of mid air during an interview with CNBC's John Harwood. He even pointed to the dead insect on the floor and said "I got the sucker." PETA flew into a rage and sent him a humane fly trap. Bet he carries that everywhere he goes now.

WORST: Joe Jonas Does Single Lady Dance
It may shock you, but we're not tweens. We don't get the Jonas brothers. In much the same way that our parents probably didn't get why we liked the Monkees or the Partridge Family, we can't understand why kids like the bubblegum bands of today. But those same tweens made this viral video one of the biggest of the year. We just can't get behind Joe Jonas doing Beyonce's "Single Lady" dance — and badly at that.

WORST: Rod Blagojevich Impersonates Elvis
We learned something new about ex-Illinois Governor Rod Blagojevich this June when this viral video hit the internet. He is not only an (alleged) liar and cheat, he is also tone-deaf. It is just downright painful to watch Blago sing (if you can call it that) Elvis' "Treat Me Right." We believe the only word to describe it, and him, is shameless. And we still are completely confused why romance cover model, Fabio, is there. Just to add to the surrealness of it all, we guess.

WORST: The Itchy Sloth
We admit we have a personal vendetta against the poor itchy sloth. We had a video on MSN.com at the same that this lazy, scratching omnivore captured the hearts of viewers. And he kept getting more hits than us. An itchy sloth? What kind of animal is that anyway? We finally beat him with our Jackie Onassis episode. We're sure her soul was quite pleased with the accomplishment.