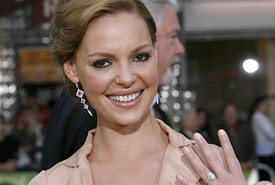 It's December and we're looking ahead at 2010 with the anticipation of a new beginning to a new year. 2009 was good to us, entertainment-wise. We were introduced to the brilliant ensemble cast of "Modern Family" and Donny Osmond danced across our TV screens and back into our hearts. We clung to Penelope Cruz's brilliance in "Broken Embraces," and we watched George Clooney soar in "Up in the Air."

Still, there are definitely some famous faces we'd prefer not to see in 2010. Here's our list of celebs that we'd like to go away in the new year.


Levi Johnston
Isn't this kid's 15 minutes up yet? And what exactly is he famous for anyway? Knocking up a Vice-Presidential candidate's underage daughter. Used to be you got in a lot of trouble for that — now they put you on magazine covers. What a world. The only thing Levi Johnston has going for him is he makes us forget about how much we loathe Sarah Palin. She should be grateful. If it weren't for Bristol's baby-daddy, she'd top our list.

Oprah Winfrey
We're tired of the hoopla, and we want to reinforce a few key points. Oprah is retiring in SEPTEMBER of 2011. That's almost two years from now. And, by then, her new cable TV network, OWN, will be up and running. So, to recap: Oprah's not going away for two years, and even then, she's not going away at all. Knowing Op, her well-timed exit from her daytime chat show is a secret political move. The next campaign will be in full swing by then; maybe Obama will choose a new running mate, and Lady O will be a heart beat away from the Oval Office. We know it's not a popular statement to make, but we're tired of her, and we just wish she'd go away.

Ann Coulter
She may be one of the nicer-looking Republican pundits, but we don't want to see Ann Coulter's face anymore. It feels like every time we turn on our TV, the catty conservative is trashing liberals or defending Sarah Palin. She's even gone after unwed mothers for the problems of society (not sure how you can do that without putting a little responsibility on the offsprings' dads, but that's another story for another blog). All of that might be OK if we didn't feel like she was just doing it for effect (and publicity) and not for some deep-seated passion to make the world a better place. Sorry, Ann, is that too magnanimous for you? We only wish that rumored lifetime "Today Show" ban of Ann earlier this year had been true.

The Women of "The View"
We have a few things we'd like to say to the ladies of "The View." You women know how much we love you (Elisabeth: not so much). We've been there with you through thick and thin. Through rotating moderators. Through your controversial John McCain thrashing of '08. Through the Elisabeth-Rosie throwdown. Through Sherri's "the-Earth-is-flat" early blunders. And we defended you to our friends and family along the way: "These women are smart and funny and important contributors to the contemporary political landscape," we'd say.

But this season has been a free-for-all. Joy and Sherri, you seem to be having inflated ego problems over your new side project TV shows. Elisabeth, you're struggling with the fact that you don't have the power of the Presidency on your side to (in your mind) legitimize your whacked-out conservative views. Barbara, you're just getting crankier and less coherent. And Whoopi, you need to remember that the cameras are rolling and we notice every time you roll your eyes at your co-hosts (not that we blame you, they're becoming increasingly annoying).

What happened to the one-person-speaks-at-a-time rule? There's so much cross-talking these days that we usually only catch every seventh or eighth word. So ladies, it's with great regret that we tell you that we don't want to see you anymore. We're just no longer able to sit back and enjoy "The View."

Susan Boyle
Don't get us wrong. We actually like Susan Boyle. She dreamed a dream heard 'round the world, and we all cried and got goosebumps when she opened her mouth for the first time. But poor Susan does not have the constitution to survive the Simon-Cowell-Super-Star-Making-Machine. A timid, shy, mildly talented person goes in one side, Simon turns the knobs and flips the buttons, and it spits, spins, lights up, and blows smoke while an over-glitzed, over-Auto-Tuned, overblown chart-topper comes out the other side. Sadly, their souls are usually stuck inside the gears of the whirring engine. Run away now, Susan, while you still can.

The Jackson Kids
From what we can tell, there's nothing interesting about the Jackson kids except their names (Prince Michael, Paris, and Blanket) and the fact that their father, Michael, was a freak. Now they're on Barbara Walter's annual "Most Fascinating People" show. We liked it better when Michael hid their faces under veils in public. At least they stood a chance at a private existence. But since the funeral, and Paris' very public good-bye to her dad, the King of Pop's kids keep popping up. Can't we please just let them be and give them a shot at settling into some kind of normalcy?

The Kardashians
How did it get so out of control? It started with a big butt and a sex tape and metastasized into a family franchise. Now Kim, Khloé, Kourtney, Robert, Kris, Bruce... and the two little ones that no one remembers are EVERYWHERE. We often tune in to "Keeping Up with the Kardashians" and "Kourtney and Khloé Take Miami" and we think, "This will be the week where I'm finally engrossed in what's going on." And yet, we never are. Sure things happen — people get pregnant and break-up and get suddenly engaged — but if you don't like the people these things are happening to, then it's just not very interesting. And we don't really like them much at all. Olympic Gold Medalist Bruce Jenner is a biologically botched patsy. Kris frequently lies to her husband and always wants to be one of the girls. Robert has recently been spending his time denying reports that he hooked up with the "Nailin' Palin" girl. And Kim, Khloé, and Kourtney are just privileged party girls. So we'd like to recommend a new show for 2010 – "Saying So Long to The Kardashians."

Jon and Kate
Personally, we never wanted them here in the first place. We never understood the concept of rewarding people with a TV show just because they were insane enough to have 347 children. And we're not big fans of the reality show train wrecks where the sole purpose is to wait patiently through all the mundane day-to-day events in the hope that it will all implode, destroy lives, and get big ratings. The saddest thing is, the locomotive (with an emphasis on the LOCO) crashed and burned a long time ago, and now they're insisting on digging through the ashes, hoping some kind of deranged reality TV phoenix will rise out of them. Give it up. Walk away. Time to get a real life.

Katherine Heigl
We were big fans of "Grey's Anatomy" the first few seasons. And we liked Katherine Heigl and the dramatic story line with Denny dying after proposing to her while she was wearing a prom gown. Granted, the past few seasons of "Grey's" have not been as compelling, but we still embraced Izzie and George, and Izzie and Alex, and Izzie and dead Denny. What we do not embrace is Heigl's should-I-stay-or-should-I-go attitude toward the series. She went off and made a few mediocre films and decided, as TV actresses often do, that she was going to be a movie star. But she won't cut the apron string all the way; she just leaves us all dangling by a few threads. It feels like every other week there's some announcement about her status on the show. Izzie has died and then un-died and left and come back so many times we've lost count. We're all sick of it, Katherine. Make a choice and stick to it.

Lindsay Lohan
It seems every few years a tortured starlet cracks under the pressure of fame and turns to illegal substances (or abuse of legal ones) and pulls the craziest stunts she can think of. Since the days of Marilyn, Hollywood has destroyed promising young hopefuls on a regular basis. Lindsay Lohan is this year's model... OK, the last few years' model. Each time we think she might be back on track, she takes a very sharp, wrong turn into the darkness again, and sometimes hits another car along the way. Lindsay needs to go far, far away and get herself all better. Get counseling, go to rehab, and detox from Los Angeles — get it all out of her system once and for all. Maybe then she could come back and use the talent she really does seem to genuinely possess.