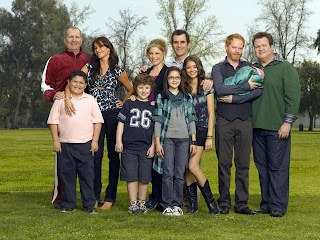 2009 was the year of the comedy. We honestly can't tell you the last time we loved a sitcom. The last few seasons our favorites have been the more dramatic and quirky shows like "Brothers and Sisters," "Pushing Daisies," and "Lost." And even this year we were looking forward to similar fare like "Flash Forward" (which is completely addictive), "Eastwick" (which we were sad to see go), and "Melrose Place" (which was a complete disappointment). What we did not expect was to become fans of the sitcom again after all these years. We are thrilled to say that this year, comedy is king. Our DVR's are working overtime right now trying to keep up with all the funny stuff. Of course, not every one can be a winner and some of the new series didn't make it on our scheduled recordings list. And so, we give you, the best and worst scripted TV series of 2009.


BEST: "Modern Family"
Our favorite new show of 2009, hands down, is "Modern Family." We are convinced 20 years from now, it will rank up there with the sitcom classics. "Mary Tyler Moore," "All In The Family," "Cheers," "Friends," and "Seinfeld." It's that good. It's one part "Arrested Development" (but doesn't try as hard), one part "Will & Grace" (but the characters are more likable), and one part "The Office" (but it's less precious). Every character is a gem. There's Cameron and Mitchell, the perfectly nuanced, just shy of stereotypical gay couple. Manny is the chivalric 12-year-old Mexican stepson with a penchant for fencing and romantic poetry. And Phil's the clueless real estate broker dad who actually has himself convinced he's hip. Even Ed O'Neill (who we'll admit, to the horror of all the "Married with Children" fans out there, we never cared for all that much) as the patriarch Jay Pritchett keeps us in stitches with his warped view of family. "90 percent of being a dad is just showing up."

BEST: "Glee"
"Glee" combines almost all of our favorite things into one - musicals, high school drama, singing, dancing, heart string tugging, and Jane Lynch. We've loved her since her days as the butch dog trainer in Christopher Guest's "Best in Show" and we've been hooked on "Glee" since the opening number — "Don't Stop Believin'." We partially credit the song choice for the success of the show (and of course, the insane choral arrangements and performance perfection). The combination of show tunes, pop pieces, and hip-hop doesn't leave any member of the potential audience wanting for more. The abilities of the misfit singing group are astounding including the starry-eyed dreamer Rachel, the dufus football player Finn, the pretend-stuttering goth girl Tina, and the diva wanna-be Mercedes. We were thrilled when they started featuring the vocal styling of paraplegic electric guitar player Artie Abrams (who might just be the best of the bunch). And then of course, there's Kurt, dear sweet Kurt — the perfect combination of Kurt from "The Sound of Music" and Idina Menzel from "Wicked"... with a little bit of Peter Allen thrown in for good measure. Add to all that a touching story and some really smart scripts and "Glee" has lived up to all its pre-season hype. Now we're just sad to have to wait until March for another episode.

BEST: "Bored to Death"
Have you checked out "Bored to Death?" If not, rent Season 1, and as soon as the DVD comes out. And set your DVR now to be sure you don't miss a second of Season 2 next year. Jason Schwartzman stars as writer-turned-private eye, with the added bonus of Ted Danson as his weed-smoking sometimes editor. Schwartzman was perfect at being... well Schwartzman. But Danson was the true star of the show. From his experimental attempt to date men in hopes that getting in touch with his feminine side would attract more readers for his magazine, to his first (and quite genius) interaction with cartoonist Ray on a pot-filled stake out, Danson was a scene stealer. We looked forward to this show each Sunday. Eight weeks went by way too fast.

BEST: "Community"
This show has been getting a lot of mixed reviews and while admittedly it tries a little too hard, it has two things no other sitcom has. 1) Joel 2) McHale. The guy is funny, with just the right touch of honest tenderness. But surprisingly, he is not our favorite thing on the show. Nor is it Chevy Chase who does what Chevy does best — a slightly insane, out of the world view of the mundane. The character we gravitated to immediately was Abed. The film student with Asperger's has an encyclopedic knowledge of all things pop culture - from the first time he opened his mouth quoting entire monologues from "The Breakfast Club" to his "Somewhere Out There" duet with Troy serenading their escaped lab rat." He is our hero.

BEST: "Better Off Ted"
Last spring, desperate to find something funny on TV, we decided to check out the new offering, "Better Off Ted." Although we have always been sort of lukewarm on Portia de Rossi, we did love her in "Arrested Development," and Jay Harrington has a great name — so why not give it a shot. It made us giggle. A lot. The quirky, send-up of a soulless research and development company, Veridian Dynamics, was different than anything before it. They made pumpkins into weapons, turned cloth into sandwich meat, and cryogenically froze an employee just to see what happened. Harrington and de Rossi were solid, as was co-worker and on-again-off-again love interest to Ted, Linda Katherine Zwordling. But the true stars of the show are Phil and Lem, played by Jonathan Slavin and Malcolm Barrett. The mad (if not somewhat sniveling and emotionless, respectively) scientists responsible for conducting all the company's R&D. "Better Off Ted" is back this week to fill the holiday void left by the sudden glut of winter hiatuses and finales. Thank you, Veridian Dynamics.

WORST: "Ruby & the Rockits"
We really wanted to like this show. As sisters, we love the idea of families working together. And what better family than the Cassidys? It was supposed to be David Cassidy's triumphant return to TV with his brothers — Patrick as co-star, Shaun as producer/director, and Ryan as set decorator. Even mom, Shirley Jones, did a guest spot. We went to visit the set before the first episode aired and got to meet them all. It was a fun day, but we knew then that the show was just trying a bit too hard and that even for ABC Family the cheese-factor was way too over the top. It was the network's answer to all the young Disney stars out there, trying to make Alexa Vegas the next Miley. But she clearly needed some better songs and some more auto-tune. Still we stuck in there with them. We watched all 10 truly painful episodes, until the bitter end. Skip the show and check the ABCFamily website for the mock ’80s Rockits' videos. Patrick and David dressed in spandex and huge blown-out mullets. "Chunnel of Love" was the best thing that ever came from this show.

WORST: "The Beautiful Life"
This Mischa Barton/Elle Macpherson vehicle was the 2009/2010 season's first causality. And it went down hard, getting the ax after just two episodes. Not many shows have been able to achieve such a high honor. The Ashton Kutcher produced show was the scripted version of "America's Next Top Model" — a bunch of runway wanna-bes living in an apartment together. Watch the excitement as egos and insecurities flaired. For anyone really interested in just how bad TV can be, the CW has agreed to air the entire six episode season (that's all they filmed) sometime next year.

WORST: "Hank"
"Hank" was the new millennium's version of "Green Acres." They took a high powered Wall Street CEO (Kelsey Grammer) who was recently fired from his job and moved him to a small town near his wife's hillbilly family. And hilarity, of course, ensued... or not. Producers figured they had an ace in the whole with the Emmy winning Grammer. He starred in two of TV's best shows ever "Cheers" and "Frasier." But they should have read down a few more lines on his resume. Did you ever catch any of "Back to You" or "The Sketch Show?" We've heard Kelsey is returning to Broadway next year in "La Cage aux Folles." That's where he belongs. Stay on the Great White Way for a while and maybe someday TV audiences will forget Frasier Crane and accept you in another role.

WORST: "Surviving Suburbia"
"Surviving Suburbia" was initially made for the CW and their Sunday night programming block, but at the last minute they pulled the plug and left Bob Saget and his show in TV limbo. Not one to let a Bob Saget vehicle go unused, ABC picked up the series, hoping it would have the success of their last shows with the actor, "Full House" and "America's Funniest Home Videos." The show fared pretty well with viewers, but it was panned by critics, and when it was moved to the dreaded Friday night death slot, its fate was sealed. Not surprising given it's less than creative premise found on an abndance of sitcoms — a bumbling suburban dad, his take no prisoners wife, the two snarky not quite precious kids, and an annoying neighbor (sometimes interchanged with meddlesome family member). If ABC had allowed Bob to infuse his edgy stand-up personality into the mix, they might have had something, instead it was just another attempt at remaking "Everyone Loves Raymond" or "Home Improvement.

WORST: "In The Motherhood"
"In The Motherhood" was another show that should have been good. Megan Mullally played Rosemary, a free-wheeling mom of a buckled up teen. In the first episode she strapped on a fake belly and pretended to be with child to cut in line at Starbucks. Cheryl Hines was Jane, a divorced mother of two who hired a manny to help her out. And Jessica St. Clair was Emily, the perfectionist, stay-at-home mom out to prove she bested all other mothers. While the chemistry between them was good, the writing, not so much. The jokes fell flat and the situations were not very comedic, or original. A slimmed down Horatio Sans from "SNL" was the only bright spot, so what does that really tell you? The sitcom was based on a web series of the same name starring Jenny McCarthy, Leah Remini, and Chelsea Handler, which ran for two years on MSNBC. Maybe these stories are just better told in 5-7 minutes.
Posted by Pop Culture Passionistas at 12:00 AM