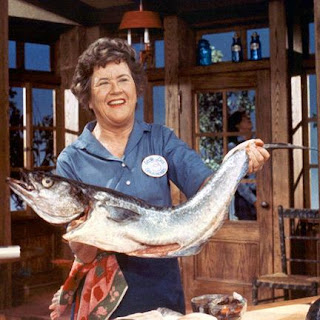 As we do our holiday cooking we pause to salute our most beloved chefs and culinary experts. See who sits at the table in our list of Favorite TV Foodies.


Julia Child
Julia Child is the ultimate TV food personality — she essentially created the genre. For those who haven't had an interest in "The French Chef" after this year's wildly entertaining film "Julie and Julia," here's her story in a nutshell. Never having found her career passion, 36-year-old Child moved to Paris with her husband, Paul, who was on assignment there for the U.S. government. The city's cuisine fascinated her, and she soon became a student at the famed Cordon Bleu cooking school. She began teaching classes of her own and editing a French cookbook for the American chef. With her charming personality and unapologetic attitude in the kitchen, she eventually became a staple on PBS, teaching housewives across America how to fearlessly debone, flambé, and brunoise with the best of them, always capped with a simple "bon appétit."

Anthony Bourdain
Anthony Bourdain's extreme eating show is aptly called "No Reservations" for two reasons. Most of the surprising spots where he stops to dine are holes in the wall or private homes uncovered by his local guides. And Bourdain (a master chef himself) never hesitates to eat even the oddest concoctions laid on his table. Some of the nastier treats he's consumed include fermented shark and warthog rectum — luckily not at the same time.

Hubert Keller
We'll start by saying there just has not been enough Hubert Keller on TV. The sexy and mature French chef has had his own hard-to-find PBS series called "Secrets of a Chef." But he really came to our attention as a guest judge on "Top Chef" and as a competitor on "Top Chef Masters." Sadly, he came in third, behind runner-up Michael Chiarello and winner Rick Bayless. We think he should have taken home the prize for his accent alone.

The Swedish Chef
Besides the occasional bit of broken English mixed into his recipes, we barely understood a word the "The Muppet Show's" Swedish Chef said. Still, he was arguably TV's first practitioner of molecular gastronomy, forgoing conventional cooking tools such as stoves and knives for blowtorches and baseball bats. His legendary chef talk and tag-line have inspired a filter called "Børk! Børk! Børk!" for Mozilla Firefox that "translates" text to the Chef's lingo. For example, "how to roast a chicken" becomes "hoo tu ruest a cheecken."

Paula Dean
If you like your food deep-fried, then Paula Dean is the TV chef for you. We're not just talking chicken and steak here. It seems that this Southern cook can figure out a way to dip anything in batter and drop it in boiling oil. But on top of that obviously attractive skill, Paula Dean has charm by the boatloads. We always liked her, but we fell in love when she appeared as a guest on "Kathy Griffin: My Life on the D-List." She welcomed the comedian into her home and proceeded to cook up meals and big belly laughs in a behind-the-scenes peek at just how deliciously delightful she really is.

Graham Kerr
We were too young to get the fact that our mom had a crush on Graham Kerr when we were little, but in retrospect she most definitely did. After all "The Galloping Gourmet" was British, witty, and could whip up Continental cuisine while chatting like he was the host of a ladies-only cocktail party. His deadly mixture of wine, rich foods, and butter led the Heart and Stroke Foundation to once dub him "Most Dangerous Man in America." But he didn't scare our mom. She never got to see Graham in person, but we know she must have dreamed that he'd reach through the TV set during the closing credits and pull her down to the stage to be his dinner guest for the evening. Unfortunately, "TGG" went off the air in 1971 after Kerr suffered temporary paralysis following a car accident.

Duff Goldman
From what we've heard, the actual cakes that Duff Goldman and his crew at Charm City make aren't all that good. Luckily, the "Ace of Cakes" gang distracts from a possible lack of flavor by making masterfully artistic creations, such as Hogwarts School of Witchcraft and Wizardry for a "Harry Potter" movie premiere or a giant tennis ball for Martina Navratilova's 50th birthday celebration. But the yummiest part of the show are the bakers and artists who work at Charm City. Yes, there are other baking shows on TV, but none of them have Mary Alice Fallon Yeskey and Geoff Manthorne.

Gordon Ramsay
Gordon Ramsay might be a terror, but he's wildly entertaining to watch. The dark underlord of TV's cooking competition show "Hell's Kitchen" spends most of his time screaming at and intimidating the wannabe head chefs of his latest restaurant. But if you check out Gordon on his show "Ramsay's Kitchen Nightmares," you'll sometimes see a softer, gentler side of the usually cutting chef. On "Nightmares," Gordon travels the country, helping restaurateurs save their dying establishments by updating their menus, revamping their ambiances, and balancing their check books. Yes, there's still yelling too, but this Chef Ramsay has a heart.

Alton Brown
We used to think Alton Brown was a little too analytical for us. After all his show, "Good Eats" is a science experiment of formulas, charts, hardware (those are the kitchen tools) and software (your basic ingredients). But we soon realized that knowing the back story of what you're cooking can actually make the process more fun and the food taste better. Then Alton took his unconventional persona on the road with the foodie travel series "Feasting on Asphalt" — kind of like Anthony Bourdain's "No Reservations" but with a lot more goodies you'd actually want to eat, like barbeque and fry bread.

Adam Richman
Every time we watch the truly adventurous and affable Adam Richman go through culinary torture on "Man vs. Food," we can't stop asking ourselves, "Why? Why would anyone volunteer to travel around the country eating food like the dreaded ghost pepper that's so hot it requires a double layer of surgical gloves to cook or dishes so big there's no scientific way they can actually fit inside a human belly?" There have to be easier cooking show gigs. But we're glad Adam does what he does, because we can live our extreme epicurean dreams through him while we sit safely on our couches and nibble on chips and mild salsa.
Posted by Pop Culture Passionistas at 12:07 PM