Our Favorite TV Moment of 2009 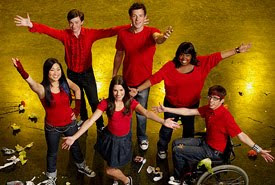 It's been a really great year for TV — the best in a long time, we think. So choosing only one moment is practically impossible. But after thinking about all the best bits on "Modern Family" and the twists in the season finales of "Mad Men" and "Rescue Me," we decided to cast our vote for something a little less cynical and more uplifting — "Glee." And while the entire series left us humming and loving Jane Lynch, Chris Colfer, and the rest of the cast, one moment gave us shivers like no other.

After the full season buildup, it was finally sectionals. Mr. Shue was banned from the competition, Sue Sylvester had given the competing teams the set list, and now the kids had to band together and come up with a winning set on the fly. The moment the always-a-diva Rachel appeared at the back of the auditorium belting out, "Don't tell me not to live, just sit and putter..." chills ran up and down our spines. Rachel finally got her well-deserved turn in the spotlight (especially after her selfless act of giving the solo spot to Mercedes). We're guessing Barbra herself was floored by Lea Michele's performance of "Don't Rain on My Parade." The cutaways to Mr. Shue's tears of joy via cellphone and even the audience's seemingly genuine surprised reaction to the performance (the best extras in the biz!) proved to us that TV might not always give us what we want, but "Glee" always gives us what we need.

Posted by Pop Culture Passionistas at 1:00 AM