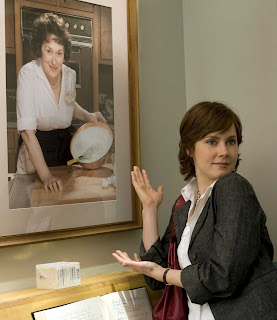 As 2009 wraps up, and the Oscar Race heats up, we take a look at the best and worst movies of the year. Be forewarned, some of our choices may shock you.


BEST: “Julie and Julia”
“Julie and Julia” had all the ingredients to be a hit movie. A heaping portion of America’s sweetheart Amy Adams as the blogger on a mission to whip up all 524 recipes in Julia Child’s “Mastering the Art of French Cooking” in one year. A dash of Meryl Streep as the TV legend on a culinary journey to master French cuisine. And a perfectly saccharine director, Nora Ephron, to stir it all together. Voilà. A deliciously entertaining movie. So go and savor the pièce de résistance - Streep’s sure to be Academy Award nominated performance. Bon Appetite!

BEST: “An Education”
What makes “An Education” such a great movie are the subtle performances by an incredibly talented cast. From the moment the always-creepy Peter Sarsgaard drives onto the screen, you know this is not going to be a typical romance. And it’s not - as he leads the sheltered English girl Jenny (played by newcomer Carey Mulligan) on a romantic and unpredictable coming of age adventure. But the film’s real star is Alfred Molina, as Mulligan’s, uptight but shockingly seducible dad Jack, who steals every scene he’s in. Not an easy task in this movie but his talent, talent seems to be growing on trees in this ensemble.

BEST: “Inglorious Basterds”
We did not expect to like this movie. We aren’t crazy about the always too-hip-for-his-own-good director Quentin Tarantino. We rarely enjoy Nazi movies (unless you include the “Sound of Music” and “The Producers” on the list). And the concept of scalping left us cold. So we were shocked at how much we enjoyed “Inglorious Basterds.” From the truly riveting opening scene, the World War II spaghetti western was a wild ride with a stellar cast. Where Brad Pitt’s over the top performance in the Coen Brother’s “Burn After Reading” made us cringe, Quentin managed to reign him in just enough so that he didn’t cross into annoying. Sure squeamish viewers like us had to occasionally watch a scene or two through the safety of our fingers. And of course Tarantino can’t reel in the desire to throw in some groovy ‘70s inspired graphics into his period piece. But this is definitely QT at his best.

BEST: “Where the Wild Things Are”
After almost 20 years in development at various studios, Maurice Sendak’s book “Where the Wild Things Are” found itself in the hands of edgy director Spike Jonze. Not a kid’s movie master by trade and with a ten-sentence text as his inspiration, Jonze had an uphill battle to fight to bring Sendak’s monster story to the big screen. And we waited a long time to see the results. First Spike moved from Universal to Warner Bros. and once there he fought countless battles with the studio to see his vision through to the end.

We’re so glad he did. While the dark and sometimes scary “Where the Wild Things Are” is NOT a children’s movie (there are concepts from it that we’re still struggling with), it is a brilliantly unique piece of filmmaking. The stark locations and lumbering creatures are surprisingly captivating. But the core of the film is the interaction between Max (played by Max Records) and his demons, with enchanting voice over performances by an equally unlikely kid’s movie cast that includes James Gandolfini, Catherine O'Hara, and Chris Cooper.

BEST: “Nine”
Clearly we haven’t seen this movie yet since it doesn’t come out until the 25th. But we are more than happy to walk out on a tinsel covered Christmas tree limb and state that this is going to be one of the best movies of the year. If you haven’t seen the trailer yet, it’s worth going to see another flick just on the hopes that you might get a glimpse of the starlet studded, musical extravaganza’s preview on a big screen. Sexy. Dramatic. And with a tambourine number. Sounds like Oscar gold to us.

WORST: “Bruno”
Let’s start by saying that “Borat” was overrated. There, we said it. And we certainly didn’t buy it back then when everyone was comparing Sasha Baron Cohen to Chaplin. PLEASE. Since when was making fun of heavy people brilliant, history making cinema? Sasha proved us right with “Bruno.” You can wrap up your cruel jokes in the guise of satire but that doesn’t make them funny. Our suggestion if you want to see a clever expose of bigots and prejudice – rent the box set of “All in the Family” and leave your lederhosen at home.

WORST: “District 9”
The brain trust behind “District 9” launched a brilliant ad campaign – papering big cities’ benches, buses, and buildings with slogans that read: “Report Non-Humans.” Only problem, we didn’t realize those ads were for “District 9” until we were sitting in the movie. Or should we say, before we walked out of the movie. You can set a sci-fi film in an Johannesburg refugee camp – but if you can’t get to the heart of the plot in the first the half hour, don’t expect us to stick around. We know that the flick was a metaphor for what happened in the District Six camp in Cape Town during apartheid but we’d rather skip the prawns and watch Morgan Freeman as Nelson Mandela in “Invictus.”

WORST: “A Serious Man”
Hold on a second. We’re bracing ourselves for the flack we’re going to get from this next statement. Phew. Okay, here we go. The Cohen Brothers are NOT gods. In fact, they’ve made some mediocre movies (“Burn After Reading,” for example) and their editor needs to learn how to stand up to them and tell them to cut half an hour (or an ending or two) out of almost every one of their films (yes, including, if not especially, “No Country for Old Men”). Now they’ve added to their list of sins with a boring, if not occasionally offensive (especially if you sit through the credits all the way to the end) film. We know this one will be on the Academy’s list of 10 Best Pictures (what do you think would be there instead, “Paul Blart: Mall Cop?”) but we stand by our opinion. This is one of the worst films of the year.

WORST: “Funny People”
This film has serious potential. Adam Sandler (in one of those “I’m-not-just-a-low-brow-comedian” crossover roles that he’s become pretty good at) paired with the new golden boy of comedy Seth Rogan. Add to that the fact that Judd “The 40 Year Old Virgin” Apatow was directing. We signed right up. But here’s the problem. The film is 146 minutes long and feels like it’s about twice that. Beyond that, about half way through the movie, it feels like a completely new and really bad film starts. We actually didn’t mind the first flick. Unfortunately, the second movie was so bad, it canceled out any residual good vibes. Rent it. Watch the first 45 minutes or so. But when the boys head north, do yourselves a favor and switch over to “Punch-Drunk Love” or even “Knocked Up.”

MOST OVERRATED: “(500) Days of Summer”
Seriously people, what’s all the fuss about? Maybe this movie is like “Juno” and we saw it too late after all the hype was in full swing. Regardless, we’re tired of “aren’t we clever” filmmaking where people break out into song just to be kitschy (it makes us musical theater fans understand how people who hate the genre feel when they’re watching them). Joseph Gordon-Levitt (who we wanted to like) just wasn’t very charismatic. And we can do without all the Smiths references, which again just seemed like another attempt by the filmmakers to let us know how cool they think they are. We’re not saying this movie is terrible but it certainly isn’t worthy of all the buzz.
Posted by Pop Culture Passionistas at 12:00 AM