TV's Most Fascinating People of 2009 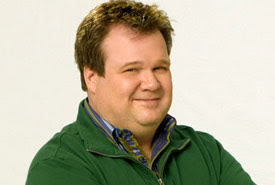 This year's Barbara Walters' Most Fascinating People of 2009 special got us thinking about who would we name as the most fascinating TV characters of the year, if we could play Baba Wawa for a night.

We would start with Cameron Tucker from "Modern Family." These days, there's no one on television that we love more than the big, cuddly gay daddy from our new favorite show. We love his optimism, his devotion to his partner Mitchell's family (even when they aren't consciously devoted to themselves), and his desire to raise his adopted baby, Lily, with some knowledge of her Korean roots (he just needs to learn how to pronounce "Pho"). And even though Cameron is a football-obsessed, sometimes melodramatic party clown named Fizbo, he can come to our play group and unleash his special dance moves any time he wants. At least we know he'll always help to soothe any "hurtful bubbling" that might flare up.

Abed on "Community"
"Community" is one of our favorite shows of the fall 2009 season. We were drawn to it because of Joel McHale and Chevy Chase — as was everyone else, we're pretty sure. And while both are impeccable on the series, the character who keeps us coming back is Danny Pudi's Abed. The film student with Asperger syndrome has an encyclopedic knowledge of all things pop culture. From the first time he opened his mouth quoting entire monologues from "The Breakfast Club" to his "Somewhere Out There" duet with Troy serenading their escaped lab rat, he is our hero.

Jenni Pulos' Alter Ego, Deb, on "Flipping Out"
We love the docudrama "Flipping Out" for all the neurosis swirling around inside the head of its star, Jeff Lewis. The man practically has architectural plans drawn up to order an Arnold Palmer. And we often wonder how his incredibly sweet and often abused right-hand girl, Jenni Pulos, puts up with his crazy ways. This season we found out: Jenni has an alter ego named Deb, a throaty, trash-talking, take-no-prisoners counterpart. Jeff and Jenni unleash her on unsuspecting contractors. Jeff begged the producers not to show Jenni in Season 1 of the show because he knew that once the cat was out of the bag, he couldn't use his secret weapon to motivate his sluggish workmen. We just want to know who we have to you-know-what around here to make sure we see more of Deb in 2010.

Sue Sylvester on "Glee"
"Glee's" track-suit wearing cheerleading coach is so blinded by power she will stop at nothing to crush the glee club's leader, Will Schuester. She's done a pretty good job of it this season, considering Will was suspended and couldn't see New Directions through to sectionals. Hey, you don't get named Cheerleading Coach of the Decade by Splits magazine by being nice. But the maniacal "Cheerios" coach and host of "Sue's Corner" has a secret soft spot — a sister with Down syndrome, whom she frequently visits. We actually prefer the harsher side of Sue: her manipulative scheming slaps a little bit of saccharine out of the show each week and keeps it from slipping into schmaltz.

The Globetrotters on "The Amazing Race"
Even though Meghan and Cheyne dominated and deserved to win this season's "Amazing Race," Herbert Lang and Nathaniel Lofton — aka Flight Time and Big Easy, or just the Globetrotters — could've taken first place. They were strong and powerful athletes. They also had something not all racers have: a good attitude. Although at times their competitive spirits made them a little nasty (anyone not shudder when they think about how mean the pair was to the height-challenged Mika at the top of that water slide?), they did not partake in the internal team bickering that plagues most duos. The one element they lacked to take the $1 million prize was brainpower — they're not the sharpest tools in the shed. Who would take a four-hour penalty in the last leg before the finals instead of at least continuing to try to unscramble the five letters "Z-R-F-N-A" (and they knew the first letter was F)? It couldn't possibly have taken four hours to try every potential combination of those letters. We wish they had at least given it their all instead of sitting idly by, while the lying, cheating brothers made it the finales.

George Christopher on "Bored to Death"
We want to come clean right now and say that we never really got Ted Danson. If anyone is still reading after our blatant disrespect to one of TV's greats, we would like to add that we are now disciples in the church of Danson. What made us cross over? A little HBO series called "Bored to Death." It was created as a vehicle for Jason Schwartzman, the poster child of the geek-chic slacker generation. And he's good. But Danson lights up the screen in his second-fiddle role as Schwartzman's weed-smoking editor George Christopher. From his experimental attempt to date men in hopes that getting in touch with his feminine side will attract more readers for his magazine, to his first (and quite genius) interaction with cartoonist Ray on a pot-filled stakeout, Danson is a scene stealer. We now proudly say after all these years, "We get Danson."

Heidi Klum on "Project Runway" and "Models of the Runway"
We're beginning to wonder if aside from being a supermodel Heidi Klum is also superhuman. Although her most recent fame has come from hosting "Project Runway," she has a list of credits longer than her lanky gams. As if being one of the most famous cover girls in the world wasn't enough, Heidi has also appeared in films and TV ("Ella Enchanted," "The Devil Wears Prada," "Sex and the City," and "How I Met Your Mother"), danced in music videos (Jamiroquai's "Love Foolosophy" and Kelis' "Young, Fresh N' New"), and been a character in several video games ("Guitar Hero World Tour" and "Everything or Nothing"). She's been a spokesperson for Braun, H&M, Liz Claiborne, Jordache, and Volkswagen. And, as is the case with "Project Runway," she's also the host, judge, and co-producer of "Germany's Next Top Model." She's designed clothing, lingerie, swimsuits, jewelry, and fragrances and was even involved in the creation of a namesake flower, the Heidi Klum Rose. She is a painter, sculptor, singer, and author, and she just gave birth to baby #3. It seems the only arena Klum hasn't entered is politics, but she's young. Give her time. Watch your back, Sarah Palin. Super soccer mom Heidi Klum could give you a run for your money.

Ron Swanson on "Parks and Recreation"
Ron Swanson is our favorite TV Libertarian. As head of the Pawnee, Indiana, Parks and Recreation Department, he once ironically stated, "My dream is to have the parks system privatized and run entirely for profit by corporations." He has a knack for spewing the most ridiculous of statements with complete conviction — the mark of any good politician. He is so anti-government that he undermines every effort made by his staff to be productive, and his loathing of the public library system is downright sublime, but completely understandable since it's run by his evil ex-wife, Tammy. Sure Leslie, played by "SNL" alum Amy Poehler, is the anchor of "Parks and Recreation," but Nick Offerman's Swanson is the wind in its sails. From a raise of an eyebrow or a blank stare at a portrait of a dark-haired woman holding breakfast food (his two favorite things: dark-haired women and breakfast foods), Ron is pure genius. But the best part about him is his alter ego, the smooth jazz-loving, sax-playing lady's man Duke Silver, who moonlights in order to "make sonic love" to his cougar audience. Guess every politician has a dirty little secret.

Kelly Cutrone on "The City"
We have to admit that if we had to spend ten minutes with Whitney Port and Roxie Olin (the far-from-dynamic, hyper-privileged duo who star on MTV's "The City"), we'd lose our minds. So we totally get why Kelly Cutrone, their boss and owner of fashion public relations firm People's Revolution, is constantly snapping at them. Every time the girls start chattering away about their bad dates or Whitney's new clothing line, we rub our hands together and scoot to the edge of our seats, anxiously awaiting Kelly's impending tirade. Well, there's great news for fellow Kelly fans: she's getting her own show on Bravo — called "Kell on Earth" —which premieres on February 1. Odds are, she'll be wearing black and berating underlings. We can't wait.

Adam Richman on "Man vs. Food"
Every time we watch the truly adventurous and affable Adam Richman go through culinary torture on "Man vs. Food," we can't stop asking ourselves, "Why?" Why would anyone volunteer to travel around the country eating food like the dreaded ghost pepper that's so hot it requires a double layer of surgical gloves to cook or dishes so big there's no scientific way they can actually fit inside a human belly? There have to be easier cooking show gigs. But we're glad Adam does what he does, because we can live our extreme epicurean dreams through him while we sit safely on our couches and nibble on chips and mild salsa.