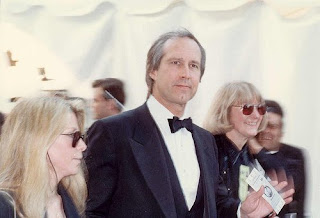 This holiday season is the perfect opportunity for movie fans to pour some rum in their eggnog and look back on one of our favorite holiday movies, "National Lampoon's Christmas Vacation."

The third installment of the "Vacation" series hit the big screen in '89, and groupies of the haphazard film family were treated to some holiday cheer, Griswold-style.

Instead of hitting the road, this time Clark, Ellen, Audrey, and Russell "Rusty" Griswold spend their holiday vacation at home. Juliette Lewis and Johnny Galecki joined the cast as the third pair of awkward teens to play the Griswold kids (Dana Barron and Anthony Michael Hall played the parts in the original Vacation, while Dana Hill and Jason Lively took over the roles in "European Vacation.)"

There is some consistency though. John Hughes returned to write the third installment that finds Clark hanging from Christmas lights and wrestling with a manic squirrel. Hughes was at the height of his career in the late '80s, having written and directed such hit movies as "Sixteen Candles," "Ferris Bueller's Day Off" and "Home Alone." Sadly Hughes passed away this year, but we've checked in with members of the cast to see what they're up to now.


CHEVY CHASE
Chevy Chase's bumbling but loveable Clark Griswold is the heart of all four "Vacation" movies. While he hasn't had a truly memorable movie turn since the series ended, Chase has worked consistently for more than 40 years. In recent years, he had a short run as Sally Field's love interest on TV's "Brothers and Sisters," and he was Chevy Chase (and, of course, you were not) on SNL's "Weekend Update" in 2007 for a few appearances early in the Presidential race. And this season he plays the wacky geriatric student on the hilarious sitcom “Community.”

BEVERLY D'ANGELO
D'Angelo's Ellen Griswold is the perfect level-headed counterpart to Chase's absent-minded Sparky. Off-camera, D'Angelo is known for a string of high-profile Hollywood relationships, including ones with director Milos Forman and actor Al Pacino. Still hot as she pushes 60, D'Angelo continues to act in such films as "Harold & Kumar Escape from Guantanamo Bay," "The House Bunny" and "Black Water Transit." Beverly was recently interviewed by Eric on his podcast "Just My Show." Check it out at www.justmyshow.com.

RANDY QUAID
Randy Quaid, Dennis Quaid's older, funnier, and much less attractive brother joined the cast again as Ellen's trashy Cousin. This time around he's Clark's foil, ultimately saving the day and getting Clark's Christmas bonus upgraded from the Jelly of the Month Club to pool installation-scale cash. Quaid most recently starred as a hit-man who gives a compulsive gambler one last hour to live in the 2008 film "Real Time." But in real life, he's been in a bit of a mess -

JULIETTE LEWIS
Juliette was just starting out when she took over the role of Audrey Griswold. Who'd have thought that just two years later she'd earn an Academy Award nomination for Best Supporting Actress for her role in "Cape Fear?" A high-profile engagement to Brad Pitt and a string of controversial movies, including "Natural Born Killers" and "Kalifornia," followed. But somewhere along the way, Lewis' career seems to have run off-track. While she's still working in film and TV, she hasn't proven to be the powerhouse actress that many had predicted. (Was it her Razzie-nominated turn in 1999's "The Other Sister" that derailed her?) In addition to acting, she has the obligatory actress-with-a-mediocre-career side project with her garage band, Juliette and the Licks.

JOHNNY GALECKI
The third Rusty Griswold, 14-year-old Johnny was a fresh-faced newcomer when he stepped into the role. Three years later he'd become famous as David Healy, Darlene Conner's boyfriend (and future husband) on the TV series "Roseanne." These days David stars in the hit sitcom "The Big Bang Theory" and was recently reunited with his first sitcom wife, Sara Gilbert, when she joined that series' cast in 2007.

JULIA LOUIS-DREYFUS
Believe it or not, there was a time when comedy star Julia Louis-Dreyfus was relegated to supporting roles, playing neighbors such as Margo Chester in "Christmas Vacation." But just two years later, she won the part of Jerry's ex-girlfriend Elaine Benes on "Seinfeld," and her career took off. The only member of the "Seinfeld" cast to truly overcome its legendary curse, Julia now stars in her own sitcom, "The New Adventures Of Old Christine" and recently reunited with her cast mates from the show about nothing on a “Curb Your Enthusiasm”/”Seinfeld” reunion.

DORIS ROBERTS
In "Christmas Vacation," Doris Roberts plays Ellen's mom, Frances, who chokes down the dusty holiday turkey without a single complaint. There's not a chance that Doris' most famous character, Marie Barone on "Everybody Loves Raymond," would have let daughter-in-law Debra get away with such shoddy cooking. Since playing that Emmy-winning role, Roberts has continued to act in such films as the upcoming "Play the Game" and "Another Harvest Moon" and to speak out against age discrimination in Hollywood.