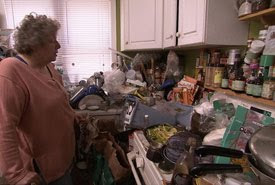 Looking to feel better about your life? Then we suggest a double dose of reality TV on A&E on Monday nights. Start with a bit of "Intervention," where you'll (hopefully) realize that things could be a lot worse — your family and friends could be knocking on your door for a little chat about your not-so-wonderful habits. Then follow it up with "Hoarders," and be glad you can even find the door that someone's knocking on.

For us, the shows are unwatchably painful and depressing. Don't get us wrong, we like a good transformation or makeover series as much as the next guy. In fact, some people might say we're addicted to them. So while we seek help for our little problem, take a look at our favorite reality self-help shows.


"Queer Eye for the Straight Guy"
The mother of all reality makeover shows was "Queer Eye for the Straight Guy." OK, it was more like the gay best friend. But in 2003, the show, and the Monkees of makeovers known as the Fab Five, became overnight sensations. Fashion-challenged heterosexual men were swooped upon by their fairy god-brothers: Kyan Douglas, the Grooming Guru; Carson Kressley, the Fashion Savant; Ted Allen, the Food and Wine Connoisseur; Tom Filicia, the Design Doctor; and Jai Rodriguez... the one who helped the makeover recipients appreciate show tunes and dog grooming. As is often the case with pure fabulousness, "Queer Eye" burned fast and bright. A revamped version known simply as "Queer Eye" and the female-centric "Queer Eye for the Straight Girl" proved to be little more than your standard style-sense shows, and the guys' madcap makeovers got a little redundant over the years.

"The Biggest Loser"
We have to admit that back in 2004, when we heard the name of the new reality series "The Biggest Loser," we were appalled. That fine line between showing real people being themselves vs. exploiting folks with serious issues was obviously being crossed. The name said it all. Still, we had to watch. We approached it cautiously and with a certain air of superiority — the way we do the Miss America Pageant every year. "We're better than this, but we just need to see for ourselves how appalling it really is."

Frankly, we were shocked. The atmosphere at the Ranch was supportive. The goal was to help people who felt they had totally lost control of their lives, not to mention their physical well-being, get a second chance. And for many contestants it was their last shot at living to a ripe old age and seeing their children grow. Eight seasons later, we've watched "Losers" (the biggest and smallest) drop pounds, regain self confidence, and become fitness gurus themselves, passing along the promise of a happier, healthier life to viewers.

"Starting Over"
As far as we're concerned, no single show in the history of self-help series has done more good than "Starting Over." The show was, surprisingly, produced by Bunim/Murray — the company behind more light-hearted fare, such as "The Real World" and "Road Rules." But "SO" was a serious series in which six women would move into a house and face their issues with the help of life coaches (including Rhonda Britten, Rana Walker, and Iyanla Vanzant) and therapist Dr. Stan Katz — who joined in Season 2 to become the only consistent male force in the process. Throughout the show's three-season run, the experts helped women (and later, couples) follow their dreams, overcome their fears, and face deep-seated emotional traumas that were preventing them from living "authentically." And boy was it good TV.

"Gone Too Far"
DJ AM, born Adam Goldstein, spent his brief life as a disc jockey and musician. He became famous for dating Nicole Richie (to whom he was engaged for a while in the early 2000s) and for his recent plane crash with then-bandmate Travis Barker (formerly of Blink 182). By all accounts, the sneaker fanatic was a really nice guy who'd struggled with and overcome his drug addiction (with 11 years of sobriety under his belt). So when news broke on August 28 that the 36-year-old DJ AM had overdosed, people were shocked. Among them were the MTV execs who were getting ready for the premiere of Adam's reality series, "Gone Too Far." On the show, Goldstein talked with addicts and their families, urging them to seek help and sharing his own experiences as inspiration. While the ultimate decision to air the series after his death was quite controversial, we think AM would've been happy to be remembered as someone who helped others overcome the addictions that took his own life.

"Extreme Makeover"
The title says it all: this show was EXTREME. Proving that beauty is skin deep but that skin can be heavily rearranged, the show's famous "Extreme Team" of plastic surgeons, dentists, dermatologists, eye surgeons, and personal trainers (including Dr. Garth Fisher, Dr. Bill Dorfman, Dr. Robert Maloney, Ava Shamban, and Michael Thurmond) transformed 55 ugly ducklings into swans with really good teeth and shiny hair. The series was popular for a few years — showing that while looks aren't everything, the self-esteem boost they provide certainly doesn't hurt — but was soon overshadowed by its spin-off, "Extreme Makeover: Home Edition."

"Sex Rehab with Dr. Drew"
We're leery of pop culture therapists ("Dr." Phil comes to mind), but believe it or not, Dr. Drew Pinsky has done a LOT of good. From his early days on L.A. radio station KROQ's call-in sex advice show, "Love Line" (which he joined in its second season back in 1984), Drew has helped countless people ask the intimate questions they might otherwise have been too embarrassed to ask.

Still, when we heard last year that he had a show on VH1 called "Celebrity Rehab," we thought he was taking things a little too far — weren't these C-list personalities suffering enough in private without sharing it with the world? We refused to watch the first season. But one rainy Sunday afternoon we noticed the dreaded "celebreality" marathon of the show, we got sucked in, and we were instantly hooked. Sure, part of the appeal in the beginning was the absolute deer-in-the-headlights shock that we felt watching Jeff Conaway self-destruct before our very eyes. But what made us keep watching was the way the good doctor actually seemed to be helping these very fragile "famous" people get in touch was some seriously heavy problems to improve their lives. Then he did the unthinkable on his spin-off show, "Sober House": he made Andy Dick not only likable but downright lovable.

This season we're riveted to "Sex Rehab with Dr. Drew" (thankfully they dropped the word celebrity from this one — we don't think the pro skateboarder and the dude from "Rock Star: Supernova's" wife count as stars either). What sounds like a made-up Hollywood addiction, a la David Duchovny, has proven to be a really dark and serious affliction, often brought on by years of physical and emotional abuse. Surely Dr. Drew will help his eight patients at the Pasadena Recovery Center, but odds are he'll positively affect the lives of countless viewers once again as well.

"DietTribe"
We recently sank our teeth into a big, juicy reality show we had never sampled before: "DietTribe." We had heard about the series, which wrapped up its sophomore season a couple of weeks ago, but we'd never taken the time to watch the show about a group of robust friends who joined forces to lose weight together. And in order to be prepared for the finale, we gorged ourselves on an Internet feast of this cycle's previous episodes. But before we indulged, we found ourselves pondering the moral question we'd asked ourselves before: Was this going to be a good-hearted series or another show looking to make a buck on people with problems?

We're happy to report that "DietTribe" lived up to the standard set by "The Biggest Loser." The women's goals were realistically set — lose 35-to-50 pounds in 120 days (just three or four pounds a week). The journey was emotional: friendships grew stronger, deep feelings were explored, and new standards for healthy living were set. And as each woman finished a finale-worthy triathlon that just months before had seemed impossible, you could tell that their lives had changed, for the better, forever.

"Tough Love"
Ladies, if you're trying to figure out why you just can't make it work with the perfect man, don't ask your girlfriends for advice. They're only going to give you another female perspective and tell you what you want to hear. Turn instead to no-holds-barred, speak-the-painful-truth matchmaker Steven Ward and his mother, JoAnna. Steve will help you figure out exactly why Mr. Right thinks you're Ms. Wrong — whether you want to know what your shortcomings are or not.

This season he's taking on the formerly heavy Jenna (dubbed Miss Body Issues), lonely and perpetually unsexy workaholic Tina (aka Miss Career Obsessed), and the bad-to-the-bone musician mama Rocky, affectionately known as Miss Off-Her-Rocker (who reality fans might recognize as the out-of-her-mind stage mother who made Danny Bonaduce look like the sane one on "I Know My Kid's a Star.") But if Steve can match his success in Season 1, the ladies will get their heads on straight and hand out their promise rings to some special guy before the cycle ends.

"Tabatha's Salon Takeover"
What's most interesting about "Tabatha's Salon Takeover" is seeing how clueless some business owners really can be. Often deeply in debt and on the edge of loosing everything, the hair honchos on which Tabatha Coffey descends can never really understand why their shops and their lives are in shambles. And almost every time Tabatha points out the same things: the place is a dump, the staff is running amok, and the owner is a wishy-washy lump who doesn't take charge. Luckily, within 44 minutes she's able to redecorate, bully a few wild cards into submission, and help the manager muster up some guts. Then, to the relief of everyone involved, she hands them back their keys and leaves.

Written by Amy & Nancy Harrington
Originally for GetBack.com
Posted by Pop Culture Passionistas at 8:00 AM