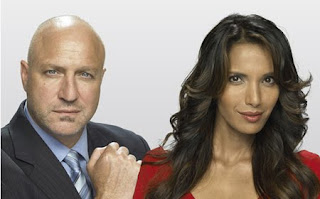 We're beginning to wonder if aside from being a supermodel Heidi Klum is also superhuman. Although her most recent fame has come from hosting "Project Runway," she has a list of credits longer than her lanky gams.

As if being one of the most famous models in the world wasn't enough, Heidi's appeared in films ("Ella Enchanted," "The Devil Wears Prada," and "Perfect Stranger"), done guest spots on sitcoms ("Spin City," "Sex and the City," and "How I Met Your Mother"), danced in music videos (Jamiroquai's "Love Foolosophy" and Kelis' "Young, Fresh N' New"), sold video games ("Guitar Hero World Tour"), and even voiced a character in one ("James Bond 007: Everything Or Nothing"). She's worked with Braun, H&M, Liz Claiborne, Jordache, and Volkswagen, and like on "Project Runway," she's the host, judge, and co-producer of "Germany's Next Top Model." She has designed clothing, lingerie, swimsuits, jewelry, and fragrances and was even involved in the creation of a namesake flower, the Heidi Klum rose. She is a painter, sculptor, singer, and actress. She also has three kids, with another on the way. We're tired from just writing all that. Going to take a nap now. Auf Wiedersehen.

Tom Bergeron on "Dancing with the Stars"

"Dancing with the Stars" is not Tom Bergeron's first hosting gig. In fact, we remember his earliest days in the '80s on local Boston TV, first on "Evening Magazine" - an "Extra" meets "20/20" weeknight series - and then on "People Are Talking," a daytime talk show in the "Donahue" mold. But Tom was cast into the national spotlight in 1998 when he became host of a "Hollywood Squares" revival, for which he won his first and only Daytime Emmy to date. Tom also added "America's Funniest Home Videos" to his hosting duties in 2001, but it was 2005's "Dancing" that made Tom a household name and served as a showcase for his quick wit and charm while tossing banter with judges and contestants.

Frankly, she's one of the most annoying people on TV, but you can't underestimate the machine Tyra's created. "America's Next Top Model" has cranked out more cat-walkers in the last 12 cycles than Ford and Wilhelmina could have dreamed. While former judges like Janice Dickinson and Paulina Porizkova might not have very warm and fuzzy feelings about their former "ANTM" co-star and boss, even they surely can't deny her fierceness.

The Cast of "Queer Eye For The Straight Guy"

In 2003 Carson Kressley, Ted Allen, Jai Rodriguez, Thom Filicia, and Kyan Douglas took the reality TV world by storm. The Fab Five descended on unsuspecting straight guys in need of some serious eyebrow-grooming or social-skill seminars and transformed them before our very eyes, all the while cracking us up with their witty banter and stereotype-fitting humor. We were always sad that we weren't straight guys so they could come redo our lives, and we were even sadder when "Queer Eye" went off the air. But we still can see the guys whenever we want. Kyan is the host of "10 Years Younger" on TLC. Ted has two Food Network shows, "Chopped" and "Food Detectives," and was a frequent guest judge on "Top Chef." Thom is making over rooms on Style Network's "Dress My Nest," and Jai is putting his culture-vulture skills to good use on Animal Planet's "Groomer Has It." But if you're looking for a little dose of the "Queer Eye" tenderness, check out Carson's "How to Look Good Naked" makeover show, where his supportive guidance gives women a new level of self-esteem.

If they gave out Emmys and raises for being the loudest host, Ty would have lots of statues and tons of money. He activates a bullhorn to wake up the next fortunate family, and you can hear him even if you don't have your TV turned on. Still, despite the noise, "EM: HE" and Ty Pennington have a heart. Every family on the show has suffered extreme hardship, and Ty and his crew transform their homes and lives in ways no one thought possible. And even though the host's energy is a bit over the top at times and the series has come under criticism for the team's often excessive designs, we can't help but wipe away a tear every time we tune in.

Chris Harrison on "The Bachelor"

Chris Harrison has got to have one of the easiest hosting gigs around. He doesn't have to travel to exotic, often dangerous lands. No need for him to ad-lib funny quips on live TV. No one looks at him in horror after he hands out fear-inducing tasks to unknowing contestants. All he has to do is sit with a bachelor or bachelorette and compassionately ask, "How did you feel during that moment in the hot tub?" or "Do you know which of these three annoying dudes you're going to spend the rest of your life [or at least the next few weeks] with?" Oh, and he has to be able to convincingly say, "The most dramatic rose ceremony EVER" for the 327th time and remember to come back onto the set to remind those of us who can't count that "this is the final rose of the evening." Still, he does put his life on the line at the end of every season in the "After the Final Rose" wrap-up show. Those things get ugly.

Phil Keoghan on "The Amazing Race"

Like we said, Phil has the best gig in Hollywood. Do a little voiceover work to explain the tasks at hand and then stand at the finish line, telling contestants the order in which they've arrived. (Sure, he had to learn a little sign language last season, but it's still a fairly straightforward job.) In between, travel the world and - we would imagine - eat great food and see the sights. At least that's what we'd do if we were Phil. But level of difficulty aside, he's always been our favorite reality host, and we were thrilled that he was nominated for an Emmy this year. In our minds, Phil, you are host #1.

The Emmy tribe had spoken in 2008, awarding Jeff Probst the first-ever statue for Outstanding Host for a Reality or Reality-Competition Program. And while he might not be our favorite, we can't deny his impact. After all, he was really the originator of modern-day reality hosting, setting the tone for how to be cool but engaged, objective yet probing. But Probst's star really began to shine when he took over the "Survivor" reunion show from the likes of Bryant Gumbel and Rosie O'Donnell. Jeff outplayed, outwitted, and outlasted the other wannabe emcees. After all, no one knew what to ask to stir up old tensions and get to the meat of the backstabbing better than Probst. May his fire burn forever.

Anderson Cooper on "The Mole"

Long before he was the really famous (if not slightly smarmy) news guy on CNN, Anderson Cooper was the host of "The Mole," one of the most underrated reality shows of all time. But when the series ended its second season, it looked buried forever and Anderson was once again just a TV journalist, making a move from ABC to CNN. Suddenly, "Celebrity Mole" geared up and Cooper had to make a choice. He chose the news. Ahmad Rashad just couldn't fill Cooper's shoes. Neither could Jon Kelley in a 2008 resurrection. "The Mole's" future is unclear, although we venture to guess it will never return. Anderson, on the other hand, is doing just fine.

If you're going to take a reality job where you make people lay in glass coffins full of creepy crawlies or eat the unspeakable, you'd better have a sense of humor. That's why stand-up comedian Joe Rogan was the perfect guy for the job. During "Fear Factor's" six seasons, the comedian handled all the gross-outs and amateur daredevil moves with a certain roguish charm.

If we were rating reality-show hosts - which, by the way, we are - we'd give Ed McMahon four stars. Johnny Carson's incomparable sidekick finally stepped center stage on this '80s precursor to "American Idol," letting unknown talent shine in the spotlight and launching the careers of future megastars like Britney Spears, Drew Carey, and Justin Timberlake.

While we write about the best reality-show hosts in history, Jim will wrestle a deadly alligator with his bare hands. Oh, how we miss the days of Marlin Perkins' adventures on "Mutual of Omaha's Wild Kingdom." Sure, Johnny Carson had Joan Embery and Jim Fowler showing off leopards every once in a while, and Animal Planet has cornered the market on primate shows. But for over 20 years, no one showed us animals in their natural habitats with more flair than Marlin.

There'd be no "Punk'd," "Howie Do It," or "The Jamie Kennedy Experiment" if it weren't for Allen Funt and "Candid Camera." Funt pretty much invented the reality show with his 1947-48 radio broadcasts, "Candid Microphone," which moved to TV in 1949 as "Candid Camera." The series has remained on TV in one form or another (as a series, as a feature on another show like "The Tonight Show," or in seasonal specials) ever since, making it the longest-running comedy show in TV history. After Allen Funt went to the big prank in the sky, his son Peter took over hoaxing duties, but it was Allen who remains the godfather of modern-day reality hosts.

This year, Ryan Seacrest signed on for three more years of "American Idol" for a reported $45 million, making him the highest-paid reality-show host in history. Really?

To be honest, we, like a lot of people, don't get Ryan Seacrest. In addition to "Idol" he hosts E! News and the annual "Dick Clark's New Year's Rockin' Eve," plus two radio shows, "On Air with Ryan Seacrest" and "American Top 40," which he took over from radio DJ god Casey Kasem. And all we can ask is, "Why?" What does Seacrest have that makes him this marketable and popular? Maybe it's that he's so bland that others can shine in his presence. That is, after all, the mark of a good reality-show host, right?

OK, so maybe he does deserve $15 million a year. We do often wonder what happened to that other dude who was Ryan's partner on the first season of "American Idol." Probably not making $15 mil a year. (Sorry, Brian Dunkleman, that's gotta sting.)