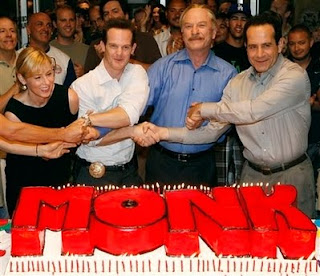 With this week's series finale of "Monk," we said good-bye to one of the most beloved neurotic characters ever. After eight seasons, Tony Shalhoub has hung up his detective hat and his 312 phobias, including panic induced by harmonicas, ladybugs, mushrooms, and milk. We think this laundry list of fears, as well as his germophobia, anxiety disorder, and obsessive attention to detail have made Monk the most "decorated" crazy character in the history of television. But he certainly was not the first and won't be the last. So in honor of Adrian Monk, we give you our favorite neurotics on TV, past and present.


Elliot Carlin on "The Bob Newhart Show"
Bob Hartley's most difficult patient, Elliot Carlin hated everything and everyone — most especially himself. In psychology terms, they'd call him a misanthrope. In TV terms, they call him as funny as it gets. Jack Riley played the paranoid, self-loathing, and mean-spirited patient, who took part in both group and private sessions. In one of the funniest episodes, Elliot asked Bob's receptionist, Carol, on a date, and when she accepted, he said, "I think I'm beginning to lose respect for you." Elliot was such a great character that he made appearances in two other series. On both "St. Elsewhere" and "Newhart," Mr. Carlin blamed his existing mental health issues on years of therapy with "some quack in Chicago."

Felix Unger on "The Odd Couple"
Felix Unger was one of our earliest encounters with a TV neurotic, and still one of our favorites. The neat freak obsessively cleaned up after his slob of a roommate, Oscar Madison. Felix was also a vitamin-popping hypochondriac with clogged-up sinuses, and when he got truly stressed out (which was often), he'd start honking like a crazed goose. But don't assume that Felix was nuts. After all, you know what happens when you assume.

Gregory House on "House M.D."
Curmudgeonly Dr. House, played by Hugh Laurie, is a classic antisocial misanthrope. He has no friends (except for Dr. James Wilson) and no interest in committed relationships (not since he broke up with Sela Ward after she went against his medical wishes, leaving him in chronic pain). His bedside manner is terrible, and some colleagues have gone so far as to say that he is so obsessed with diagnosing illnesses that he doesn't care at all about saving his patients.

Monica Geller on "Friends"
Courteney Cox famously played Monica Geller, the obsessively clean, bossy mother hen of the ’90s trendsetting sitcomers. "Friends" revolved around her anally spotless NYC apartment, where she first lived with Phoebe, who moved out for fear that Monica's compulsion with cleaning would ruin their friendship... and that was in the pilot episode. Her second roommate, Rachel, once offered to clean up after a get-together, and Monica replied, "Are you kidding? You had your party, now I'll have mine!" Monica dust-busted her vacuum, kept car cleaning supplies on hand in case a dirty vehicle was parked in front of her building, and described a trip to the dry cleaner as going to Disneyland. But it was Monica's third roommate and future husband, Chandler Bing, who discovered this neat freak's deep, dark secret: a closet stuffed, cartoon-style, with floor-to-ceiling clutter.

Jeff Lewis on "Flipping Out"
Bravo describes Jeff Lewis as "everyone's favorite obsessive-compulsive house-flipper." We're not sure "favorite" is the word his employees would use to describe him (especially the ones he fired after he caught them rummaging through his personal things), but he sure makes for entertaining TV. From his tirades about how long each member of his staff is allotted for bathroom visits to his lectures on the appropriate amount of salsa per person with Mexican take-out lunches, Jeff's OCD never disappoints. In fact, we enjoy his so much that we'd like to buy him a drink: "Ideally, 70 percent lemonade, 20 percent punch, 10 percent Sprite. If they don't have fruit punch, do, like, 85 percent lemonade and 15 percent Sprite. If they don't have lemonade, do 85 percent punch and 15 percent Sprite. Or 7-Up."

Henry McNeeley on "Stark Raving Mad"
We think "Stark Raving Mad" didn't get a fair shake. In this short-lived series, Tony Shalhoub wasn't the neurotic — he was the practical-joking horror writer Ian Stark — while Neil Patrick Harris played his uptight, obsessive-compulsive editor, Henry McNeely. It should have been a classic. Instead, it got the boot before it got a chance. Still, Henry will go down in the books as one of TV's best neurotics. His first line of the entire series, after meeting his favorite author was, "I don't usually shake hands during flu season, but I'm such a fan, it's an honor" — and then he proceeded to slather on a bottle of hand sanitizer (long before it was the common accessory of today). Henry's personality can probably best be summed up by the show's theme song lyrics: "Batty, bonkers, crazy, loopy, loony, hazy / Chaotic, neurotic, peculiar, and amazing / Demented, deranged, particularly strange / Frantic, ranting, shaky, flaky, making me insane."

Grace Adler on "Will & Grace"
Grace Adler, the self-absorbed, neurotic, compulsive overeater (who never gains an ounce!), was the straight half of the "Will & Grace" duo. The dedicated and professional interior designer by day was a bundle of insecurities in her private life... especially when it came to men. Will was the only one who understood her neuroses and put them all in perspective for her. But when Will, and all else, failed, she could always turn to comfort food. One of our favorite Grace lines has got to be, "OK, here's the Thanksgiving menu so far: apple pie, pumpkin pie, blueberry tart, and ice cream roll. What am I missing? CAKE! We need cake." And all the problems melt away.

Chad Rogers on "Million Dollar Listing"
The 32-year-old real estate tycoon (who looks like Johnny Ramone's 12-year-old emo brother) would drive an anal-retentive person crazy. Clients seem to like him for his obsessive-compulsive organizational skills, but do they see just how nuts this guy is? He uses approximately one can of hairspray every day on his perfectly coiffed helmet-head so that every strand is precisely positioned. Maybe the best example of his neurosis occurred on the episode when he was packing a suitcase and everything that was going inside the luggage was first placed in its own individual plastic bag: breath mints, a CD, a roll of TP, a hairdryer, a can of hairspray (naturally), business cards, and even a note he had written. Between the aerosol and the plastic, Chad is living proof that OCD is not a eco-friendly disorder.

Niles Crane on "Frasier"
You would think that a psychiatrist would be able to cure his own neuroses. And yet Niles Crane, Frasier's younger, more uptight brother, lived his sitcom life obsessively washing his hands and wiping germs off seats before siting down. In a Pinocchio sort of way, he got nosebleeds when he lied, fainted when he saw blood, and hyperventilated when faced with stress. No wonder their mother always liked Frasier best. We prefer Niles.

George Costanza on "Seinfeld"
"Seinfeld's" George Costanza was a narcissistic, self-loathing, commitment-phobe mama's boy, whose stinginess, insecurities, and habitual lying formed the crux of his days of doing nothing. Many of the "Seinfeld" plots centered on George's elaborate deceptions, both at work and in his personal life, but his plans were often curtailed by his compulsive laziness and array of phobias (including a fear of contracting lupus). George himself best summed up his personality in an episode called "The Beard." After Elaine threw his hairpiece out the window, he explained, "It was the best thing that ever happened to me. I feel like my old self again: neurotic, paranoid, totally inadequate, completely insecure. It's a pleasure!"

Written by Amy & Nancy Harrington
Originally for GetBack.com
Posted by Pop Culture Passionistas at 8:00 AM