Too Old for Action 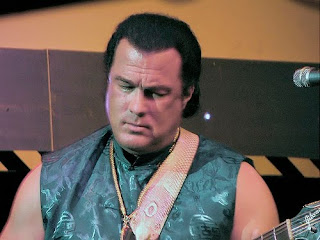 We thought 58-year-old Steven Seagal’s action days were long gone but now he’s showing us that he can still kick butt in real life with his docudrama, "Steven Seagal: Lawman."  We were shocked to find out that the one-time martial arts master has actually been a deputy sheriff on the Jefferson Parish police force in New Orleans for years.

We’re glad he has a day job because Seagal hasn't made a good action movie that anyone has gone to see since 1994's "On Deadly Ground." You might ask yourself what the former action star has been up to for the last 15 years. Seagal has, in fact, been making movies — more than 25 since "ODG" came out. If that surprises you, then clearly you haven't been trolling the action aisles of your local video store (if you still have one). Over half of those films have gone straight to video.

We still thing he’s getting a long in the tooth to be getting into fist fights on the big screen or on the Louisiana mean streets. And he’s not the only movie star we think is a little too old for action.

"Surrogates" star Bruce Willis does not appear to be laying off the action roles. While on one level we completely respect that, on another we just can't help but think he should be leaving the butt-kicking to the younger guys.

Aside from the occasional low-energy part in such films as Barry Levinson's "What Just Happened," Bruce is still keeping things amped up in movies like 2007's "Live Free or Die Hard" and the upcoming "Red." How does the 54-year-old actor pull off these high-octane performances? Maybe he's using a surrogate.

When he took office in 2003, it looked like Arnold Schwarzenegger was hanging up his loin cloth and leaving his action hero past behind him. But somehow, the 62-year-old megastar/politician has managed to find the time for an appearance in Sly Stone's latest action extravaganza, "The Expendables." We wonder if he used one of his standard California employee two unpaid days a month to shoot his scenes. Regardless, Arnie may still be buff, but he's better off in a suit, leaving the action roles to younger men.

Clint Eastwood clearly started to lay out his post-action hero plan B very early on. With his 1971 directorial debut, "The Beguiled: The Storytell," Dirty Harry began to establish himself behind the scenes as a director. Sure, Clint still acts in some of his films. But he's smart enough to take on the roles of low-key, gruff sage who's pushing all the young whipper-snappers around. And he knows when to stay off camera all together, too. The 79-year-old Academy Award winning director will not be appearing in his next two films, "Invictus" and "Hereafter."

It makes us cringe to even say this, but here we go: Harrison Ford is 67 years old. Han Solo, our first childhood crush, is well into his AARP years, and yet he refuses to slow down. We just can't help but think he's a little long in the tooth to be chasing Nazis or, worse yet, space aliens. But despite a sometimes creaky performance in 2008's "Indiana Jones and the Kingdom of the Crystal Skull," Harrison's announced he's ready to go with "Indy 5." Sure, Shia LaBeouf will be back to do more of the heavy lifting, but it will still be hard to watch Ford huff and puff his way alongside his much younger co-star.

Sylvester Stallone is clearly not willing to accept that he's a 63-year-old former action star, and he won't let go. Quite the contrary. In his next film, "The Expendables," he's pulling together a who's who of fading action heroes, from Dolph Lundgren to Mickey Rourke. Sly explained, "I wanted to do a film that was more about men and just doing things that we did back in the '80s and '90s with films that were a little bit more men on men, and actual physical stunts, and also a story that isn’t super-gigantic." Thank goodness someone's perpetuating the Hollywood legacy of overblown action films with no story line.

At 49, Jean-Claude Van Damme doesn't put as many butts in seats as he used to. His 2008 release "JCVD" (that stands for Jean-Claude Van Damme for those of you on whom the subtlety of the title was lost) had a domestic gross of $470,691. But is this due to his inability to kick as high as he used to or the fact that audiences realized his movies just aren't that great? The "maturing" action star still appears to be in fighting shape. We hope so, for his sake at least. Not only is he costarring in 2010's "Universal Soldier: A New Beginning" with fellow faded actioner Dolph Lundgren, but he's also returning to the ring in real life in March 2010. He'll be going for five two-minute rounds against Thai Olympic boxing gold-medalist and muay thai fighter Somluck Kamsing.

Travel back in time with us if you will. Remember a day long before Mel Gibson's shameful DUI arrest. Think back to the moments when Mel was the handsome young star of films like "Mad Max" and "Lethal Weapon." But even the man behind Martin Riggs has had to embrace the famous words of his partner Roger Murtaugh, "I'm getting too old for this s**t." These days, and thanks in no small part to his high-profile run-in with the cops and the insane fortune he amassed from his film "Apocalypto," Mel has mostly stayed behind the camera, sparing us the pain of potential films like "Mad Max: Beyond Ancient."

We admit it. We wouldn't want to have a run-in with Jackie Chan in a dark alley. He could certainly kick our butts — even two to one. Still, we think it's interesting that the practitioner is becoming the master in the upcoming "Kung Fu Kid" movie — the remake of "The Karate Kid." Correct us if we're wrong, but we don't remember Pat Morita doing anything but waxing on and off in the original film. Will Chan unveil some more impressive moves than Morita did? Or is this an early indicator that he's going to keep letting the pandas do his kung fu for him?

Personally, we like our action stars to have something going on upstairs. No, we don't mean brains. We mean hair. From the female perspective, the thing that makes a good action movie is watching a really hot young actor run around for two hours getting all sweaty and dirty. Nic's already quirky looks are just not standing up to the test of time. So even though he's only 45, we think it's time he packed it up and moved back over to dramas.