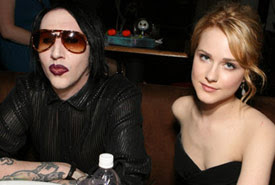 It's official. After a three year on-again-off-again relationship, Evan Rachel Wood is engaged to... wait for it... Marilyn Manson. Yes. You heard that right. At the age of 22, the young beauty has decided to settle down with the shock rocker after being back together for just one month.

So how did he do it? Are you a less than hunky dudes wondering how you could end up with such a babe? We decided we would pass on some advice on how to land a lady that's out of your reach. Here are some other not-so-beautiful celebrities who've managed to pull it off in the past.
Tip #1: Get 'em while they're young
Case in Point: Evan Rachel Wood and Marilyn Manson
While on a break from Manson, rumors swirled that Wood briefly dated her "Wrestler" co-star, Mickey Rourke. He had every right to believe he'd have a shot with her. Come on, she dated Marilyn Manson! But how come Manson (who, let's face it, may be the one person we can think of that's freakier than Mickey Rourke) could seal the deal and Mickey couldn't? When Wood met Manson at a party at the Chateau Marmont in 2006, she was just 18 and not old enough to know better.

Tip #2: Make it quick
Case in Point: Lyle Lovett and Julia Roberts
Lyle Lovett didn't waste any time when he met Julia Roberts on the set of the 1992 Robert Altman film "The Player." The couple dated for three weeks (no, that's not a typo) and then eloped. Clearly, she didn't have a second to think about what she was doing. But over the course of their marriage reality must have set in, and they divorced two years later.

Tip #3: Offer her the world
Case in Point: Michael Jackson and Lisa Marie Presley
It's an age-old question: How did Michael Jackson get Lisa Marie Presley to marry him? We can only assume that the King of Pop gave the King's daughter things even she couldn't have dreamed of. Imagine these perks: Neverland, a house that actually trumps Graceland; a pet chimp; and a dowry that might include the Elephant Man's bones. What's not to love?

Tip #4: Have a big ego
Case in Point: Gene Simmons and Shannon Tweed
Since Gene Simmons has the biggest ego in rock, it probably didn't occur to him that Playboy Playmate Shannon Tweed was completely out of his league. But Gene wiped off his KISS makeup, ran a brush through that helmet hair of his, and asked the beauty out. She must have been blinded by his confidence.

Tip #5: Put her in your music video
Case in Point: Ric Ocasek and Paulina Porizkova
How could a scrawny, pasty-faced rocker land one of world's most stunning supermodels? He put her in his band's video. The Cars' Ric Ocasek met the young model and aspiring actress Paulina Porizkova in the Timothy Hutton-directed video for "Drive." His appeal to the young beauty mystified many at the time, but they've been married for almost 20 years.

Tip #6: Write a song for her
Case in Point: Billy Joel and Christie Brinkley
Billy Joel met Christie Brinkley while they were both on vacation in St. Barts. But how could the 5' 5" piano man win over the 5' 9" model?  Write a song for her, of course. The result was the 1983 gold record "Uptown Girl." He was smart enough to put her in the video too. Oh, and the fact that he gave her a diamond engagement ring that was reportedly "the size of a sugar cube" probably didn't hurt either.

Tip #7: Be the consummate bachelor
Case in Point: Adam Duritz and Mary Louise Parker
Goofy-looking rock star Adam Duritz has dated Mary-Louise Parker, Jennifer Aniston, and Courtney Cox. Why? Because he can. He's 40-years-old, has never been married, and is pretty much baggage-free. Plus, when ex-girlfriends like Parker call up after a high-profile break-up, Duritz is happy to throw on a tux and walk the red carpet. Very smooth.

Tip #8: Be intense
Case In Point: Sean Penn and Robin Wright Penn
Take a cue from Sean Penn. Be intense. This depth can often be mistaken for passion and by the time a beautiful girl like Robin Wright figures out that you're just a hyper-serious, kind of angry dude, you've got two kids and a house in the suburbs.

Tip #9: Bond with her during adversity
Case In Point: Drew Barrymore and Tom Green
Sure Drew Barrymore thought Tom Green was funny and that goes a long way in the goofy looking guys winning over starlets world. But, let's face it, Green isn't THAT funny. So how did he manage to get Drew to marry him? Adversity. They were together while Green battled testicular cancer and a fire ravaged their Hollywood Hills house. How do you break up with someone in the midst of that kind of drama?

Tip #10: Have a thirst for power
Case In Point: Fred Thompson and Jeri Kehn-Thompson
When Fred Thompson and Jeri Kehn met at the check-out line of a Kroger supermarket was she dazzled by his dashing good looks? Um, doubtful. Did she remember his roles in "The Hunt For Red October" or "Curly Sue?" Unlikely. Or, did he tell her he was a Senator from the fine state of Tennessee who planned to run for President someday? That seems like the line that won over the women he now affectionately refers to as his "trophy wife." Right, it wasn't his charm, either.