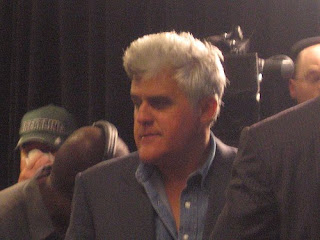 We're in a TV lover's funk.

We just read the news that NBC might be moving Jay  Leno back to 11:30 and putting Conan O'Brien in limbo - aka, dumping him from the line-up. Given recklessly bad choices like this, is it any wonder that the peacock network has suffered so miserably in the ratings in the last few years?

We understand that network execs believe "Jay Leno is one of the most compelling entertainers in the world today." Personally, we don't get it.

Have they even watched Conan? He's hilarious. They should sit down and check out Tuesday night's episode featuring O'Brien's charming interview with Chris Pratt from "Parks and Recreation" and the funniest Triumph the Insult Comic Dog skit since the edgy pooch blasted "Star Wars" fanatics.

Conan, Andy Richter, and Triumph consistently make us laugh out loud. Jay Leno has never made us chuckle.

Some may prefer Leno's "Tonight Show." We think it's a mediocre series... for Triumph to poop on.
Posted by Pop Culture Passionistas at 5:40 PM