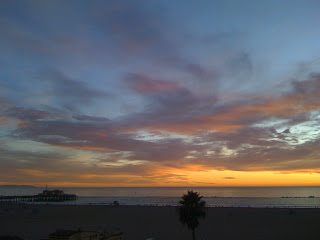 We spent the first day of 2010, looking ahead at the coming year, watching this most beautiful sunset, and thinking of all the pop culture goodies we have to look forward to in ’10.

Here’s a look at our most anticipated Top 5:

5. The Kinks Reunion – A very low key report was posted the day before Christmas that Ray Davies is considering a Kinks reunion in 2010 under two conditions. First, the demos he and the original band are working on have to be good – Ray doesn’t want to just do a golden oldies tour. And second, his brother has to be up for the road show. Dave suffered a stroke five years ago but has some solo shows scheduled in the months to come so hopefully he’ll be up for the get together with his mates.

4. The Return of “Modern Family” – The last two weeks have been the longest of our lives TV-wise. When we were little, we’d have to endure the long, hot, boring summer of reruns until the new season of shows premiered each September. Now we’re spoiled by an unending cycle of first run content. Except for the entertainment wasteland that is the last couple of weeks of December. The downtime is especially hard to take when you have a favorite new show. We are counting the seconds until Cameron, Manny, and the “Modern Family” gang returns with a new episode (and guest star Benjamin Bratt) this week.

3. "Alice in Wonderland" – We’re cautiously optimistic about this latest Tim Burton/Johnny Depp partnership, which is due out on March 5. After all, Burton has disappointed us before when he should have been at his absolute best (don’t you know better by now than to get us started on a “Planet of the Apes” or “Charlie and the Chocolate Factory” tirade?). But truly if there was ever a piece of fiction and a director that were meant to be paired it is Tim and “Alice.” So why the hesitation? Two reasons: 1. How will he expand the Mad Hatter role so we get a suitable amount of Depp face time? 2. How can he minimize the White Queen’s part so we don’t get too much Anne Hathaway. We’ll just sip some tea and wait and see.

2. The Olympics – We’re not really outdoorsy types but we’ve always loved the thrill of victory and the agony of defeat. So the Olympics are right up our alley. We love the winter Olympics so much we’ll even watch a little of that weird cross country skiing/shooting event. But, of course, our first love – figure skating. Men’s, Women’s, Pairs, Ice Dancing – give us a Triple Salchow and a cup of hot cocoa and our February is complete. Never been a fan? Give it a chance. You have two weeks to catch the action in Vancouver this February 12 through the 28.

1. “What Would Brian Boitano Make?” – The final frosty weeks of winter can be depressing after the Russian judges have packed away their 10’s and the Olympic torch has been doused. But not this year. Because the Food Network has promised that the greatest cooking show ever is returning this March. “What Would Brian Boitano Make?” We don’t know but we can’t wait to see. Check back soon for our official countdown to the season premiere.
Posted by Pop Culture Passionistas at 10:57 AM