How Did They Tame Hollywood's Legendary Bachelors? 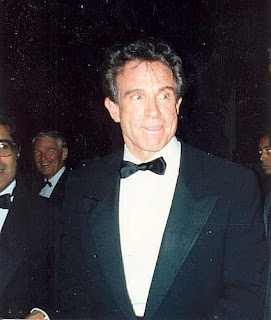 We’ll never know if Warren Beatty slept with over 12,000 women as author Peter Biskind alleges in his evidently-not-so-authorized-after-all biography of the legendary lothario. But there is one indisputable fact in the ladies man’s life story. He ultimately left all the other starlets behind and married Annette Benning. We will always wonder what was so special about his “Bugsy” costar that made him give up the single life after holding out for so long.

And she’s not the only beauty who tamed a Hollywood stud’s beastly ways. So we’re curious - what has Annette got that Madonna didn’t? Why did Scott Baio choose Renee Sloan to be his Playmate ‘til death do them part? We take a look at them and some other lucky ladies who've landed notorious celebrity bachelors and ask, "How Did She Do It?"

OK, we actually think that Warren Beatty settling down with Annette Bening had less to do with her and more to do with his exes. The list, as we all know, is very long and includes such difficult divas as Barbra Streisand and Cher. But before he married Annette, Warren was involved with the most high-maintenance girlfriend of all time: Madonna. To make matters worse, he let her film their relationship for the documentary "Truth or Dare." Warren was not amused. So when a nice, drama-free beauty like Annette Bening walked through his door, Warren must have realized that he shouldn't let a good thing get away. Good call. They've been married for 17 years and have four kids.

Bruce Willis has dated a lot of pretty girls. A LOT of pretty YOUNG GIRLS. Of course, he was married to Demi Moore for a stretch, but before and after Demi was a string of models, "actresses," and Playmates who seemed to keep him busy but couldn't hold his interest for very long. So what's so special about Emma Heming, his new bride? The facts are pretty clear: She's been a spokesmodel for La Senza lingerie, she walked the catwalk for Victoria's Secret, and she was #86 on "Maxim" magazine's "Top 100" list in 2005. Plus, we figure he just wanted to show Demi he could do one better than her – Emma is a year younger than Demi's hot, young husband, Ashton Kutcher (Emma is 30, and Ashton is 31).

Twenty years. That's how long they've been together. She must have been thrilled after 12 years when he finally asked her to move in. But then she had to give birth to his only child (Henry) and wait eight more years for the ring. What was the quality that drove Dave to commit to Regina? Given last year’s admission of his intraoffice relationships with other women, we’re assuming it’s her willingness to let Dave be Dave.

Poor Scott Baio. He was turning 45, and he was single. He was so troubled about whether or not he should commit to his then girlfriend, Renee Sloan, that he actually had to hire a life coach and land a TV show (called, appropriately enough, "Scott Baio Is 45… and Single") to work through his issues. Along the way, he let a bunch of exes (including Erin "Joanie Loves Chachi" Moran) tell him he was a jerk and he recounted a lot of stories about dating many, many Playmates. But at the end of the day (and 13 episodes later), Scott realized that his serial-dating lifestyle was empty, and he proposed to Renee. Not a moment too soon: as Scott slipped the ring on her finger, Renee let it slip to Scott that she was pregnant. We weren't losing a celebrity bachelor, we were gaining a reality show, "Scott Baio is 46… and Pregnant."

Sure, Brad was already married to Jennifer Aniston when he met Angelina Jolie, but Angie changed him from a husband with one foot out the door to a deeply committed family man. Don't forget that Brad's the one who told Oprah, while he was still married to Jennifer, that he wasn't sure if it's really "in our nature to be with someone for the rest of our lives." He proved that to be true when he left Jen for Angie. But what may have started out as a heated infatuation became a life with six children, seemingly before Brad had a chance to catch his breath and decide if it was what he really wanted. We hope he's happy – marriage may not be forever, but kids sure are, and there are new rumors that baby #7 may be arriving soon from India.

Jack Nicholson was married once, for a few years in the '60s, to an actress named Sandra Knight. But Jack has said that the real love of his life was Anjelica Huston. And although they never married, they were together for 16 years, his longest relationship ever and a fairy-tale love affair by Hollywood standards. Was it her exotic beauty, her incredible talent as an actress, or the fact that she was from a legendary film family (her father was director John Huston) that initially drew Jack to Anjelica? Whatever the reason, he most likely stayed because she let him be him. She knew Jack was having affairs, but she turned a blind eye because she thought he was "the world's sexiest, most gorgeous man" (her words not ours). Maybe they would have lasted forever if Jack's infidelity didn't backfire when he got Rebecca Broussard pregnant. Anjelica found out (these things are hard to hide), and she told Jack he had to be with Rebecca and do the right thing for their unborn child. Then she beat the living crap out of him — really. Can you blame her?

Harrison Ford has been married twice – from 1964 to 1979 to his pre-Han Solo fame wife, Mary Marquardt – and then from 1983 to 2004 to his post-Han Solo fame wife, Melissa "I-Wrote-E.T." Mathison. So he isn't exactly known for his wild bachelor past. But when his marriage to Mathison ended in one of the most expensive divorces in entertainment history (she reportedly got $85 million), we just figured he'd never get married again. Then he met Calista Flockhart, and now after seven years together, the two are engaged. Calista, of course, is a star in her own right; she's financially secure (with her current hit show "Brothers and Sisters" and with the residuals from her first hit show, "Ally McBeal"), and as an independent single woman she adopted her son, Liam, on her own. The force is definitely strong with
Posted by Pop Culture Passionistas at 12:26 PM