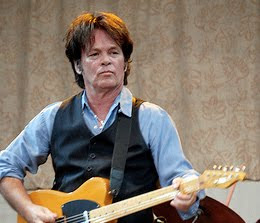 http://www.flickr.com/photos/bobtilden/ / CC BY 2.0
If a select number of his Facebook friends get their way, the artist formerly known as Cougar (aka John Mellencamp) will be making a run for Evan Bayh’s soon-to-be-available Indiana Senate seat.

Over 3,500 fans have raised their voices in support of the “Draft John Mellencamp for Senate!” page. Apparently these fans feel, and we quote, that the musician “established his political creds long ago with performances for ‘Farm Aid’ and many other political events.” Interesting. We thought that holding public office took a little more experience than singing a few rousing rock tunes. Maybe an outsider will bring a new and refreshing perspective to the stodgy old ways in Washington, D.C. At least we’ve been told before that this concept would work.

Still, Mellencamp wouldn’t be the first seemingly under-experienced celebrity to successfully wage a political campaign. There are the obvious movie star politicians like Ronald Reagan, Clint Eastwood, and Arnold Schwarzenegger who have morphed their high profiles into positions of power. And there were the once famous but now forgotten trailblazers like Fred “Gopher” Grandy from “The Love Boat” and wrestling great Jesse “The Body” Ventura.

Maybe it’s that old sex, drugs, and rock ‘n’ roll adage that has prevented more musicians from becoming politicians. Besides Sonny Bono (who served as the Republican Representative for California’s 44th District from 1994-1998) there haven’t been many singers who have landed high-level government gigs. Although Kinky Friedman ran as the Independent Candidate for Governor of Texas in 2006 (and may repeat the effort in 2010) and Nirvana’s Krist Novoselic mulled over a run for Lieutenant Governor of Washington state in 2004 after a long standing interest in politics including the creation of JAMPAC (Joint Artists and Musicians Political Action Committee) in 1995.

So it looks like Al Franken might have to scooch on over to give Mellencamp some space. There could be a fresh famous face in the Senate sometime soon.