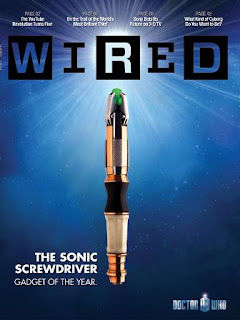 THANK YOU TO EVERYONE WHO HAS ENTERED. THE CONTEST IS NOW OVER. THE WINNER WAS TERRI FROM CLEARWATER, FLORIDA. CONGRATULATIONS, TERRY.
On April 17, 2010, a new era of the BAFTA-winning series, Doctor Who, premieres at 9:00 PM/8c on BBC AMERICA. In anticipation of the premiere, we are giving away a Special Edition of the April 2010 issue of Wired Magazine, featuring a Doctor Who themed 4-panel cover wrap, which highlights The Sonic Screwdriver as “Gadget of the Year.” This Special Edition is not available to Wired Magazine subscribers, or on newsstands, but you can win it here!

Simply send an email to popculturepassionistas@gmail.com with the subject DOCTOR WHO GIVEAWAY. The email must contain your full name and complete mailing address for prize delivery if you are declared the winner. Each email address can enter once per day. For complete rules see below. Note: The giveaway is open to U.S. residents only.


Official Giveaway Rules
1. Program Description/Eligibility: No purchase necessary. This promotion is open to Pop Culture Passionistas readers who are legal residents of the 50 United States or the District of Columbia. The promotion begins on April 2, 2010, and ends on April 15, 2010 ("Entry Period"). Only one prize will be awarded.
2. How to Enter: Send an email with the subject DOCTOR WHO GIVEAWAY to popculturepassionistas@gmail.com. The email must contain your full name and complete mailing address for prize delivery if you are declared the winner. You can enter once per day. On April 16, 2010 one winner will be selected in a random drawing from eligible entries received to win a Special Edition of the April 2010 issue of Wired Magazine. Random drawings will be from among all entries received during the entry period. No responsibility is assumed by Pop Culture Passionistas for lost, late, or misdirected entries or any computer, online, or technical malfunctions that may occur. Odds of winning a prize depend on the number of eligible entries received.
3. General Conditions: Entrants agree to abide by the terms of these official rules and by the decisions of Pop Culture Passionistas, which are final and binding on all matters pertaining to this giveaway. This giveaway is governed by the laws of the United States. All federal, state, and local laws and regulations apply. Return of any prize/prize notification as undeliverable may result in disqualification and selection of an alternate winner. Entrants further grant to Pop Culture Passionistas the right to use and publish their proper name and state online, in print, and in any other media in connection with the contest. Acceptance of a prize constitutes permission for Pop Culture Passionistas to use winners' name and likeness for advertising and promotional purposes without additional compensation unless prohibited by law. By entering, participants release and hold harmless Pop Culture Passionistas, their respective parents, subsidiaries, affiliates, directors, officers, employees, and agents from any and all liability or any injuries, loss, or damage of any kind arising from or in connection with this contest or any prize won.
4. Internet: If for any reason the Internet portion of the program is not capable of running as planned, including infection by computer virus, bugs, tampering, unauthorized intervention, fraud, technical failures, or any other causes beyond the control of Pop Culture Passionistas that corrupt or affect the administration, security, fairness, integrity, or proper conduct of this contest, Pop Culture Passionistas reserves the right, at its sole discretion, to disqualify any individual who tampers with the entry process, and to cancel, terminate, modify, or suspend the giveaway. Pop Culture Passionistas assumes no responsibility for any error, omission, interruption, deletion, defect, delay in operation or transmission, communications-line failure, theft, or destruction or unauthorized access to, or alteration of, entries. Pop Culture Passionistas is not responsible for any problems or technical malfunction of any computer online systems, servers or providers, computer equipment, or software, or for failure of any e-mail or entry to be received by Pop Culture Passionistas on account of technical problems or traffic congestion on the Internet or at any Web site, or any combination thereof, including any injury or damage to participant's or any other person's computer related to or resulting from participation or downloading any materials in this giveaway.
5. Winner Notification: Winner will be notified by email and announced on the Pop Culture Passionistas website on April 16, 2010.