Hugh Hefner Saves Hollywood... or at Least the Sign 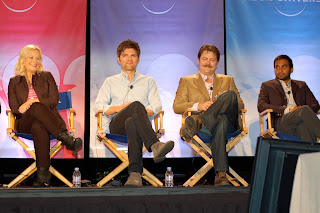 At the 11th hour Playboy's Hugh Hefner rode in on his white steed and saved the Hollywood Sign from near extinction. Los Angeles' knight in shining armor donated $900,000, the last chunk of money needed to win an ongoing battle to save the legendary landmark.

A preservationist group called The Trust for Public Land has been fighting for months to raise the cash necessary to buy the land around the famed Hollywood Sign. Otherwise, it most likely would have been sold to developers and turned into a McMansion housing site.

Hef's donation helped the organization reach the final purchase price of $12.5 million. The Cahuenga Peak, the site of the iconic sign, will now be donated to Griffith Park and will never again be threatened. Also stepping forward in the past months were Tom Hanks, Steven Spielberg, Norman Lear, and the Lucasfilm Foundation.

In a recent interview with the cast of Parks and Recreation

at the NBC Summer Press Day the subject of Hef's generosity came up.

Amy Poehler joked, "$900,000? Wow, I didn't know he had that much money. Where did he get that money? That's great. So what happened?" She asked, "You can't build other Hollywood signs near it?"

Nick Offerman clarified, saying, "It's being given as a parcel to Griffith Park."

Poehler quipped, "Playmates will be able to graze there freely. It's a range area. Old Playmates. Just setting them back into the wild."

Michael Schur, Parks and Recreation's Executive Producer, added to the gag, "A humane end to their lives."

"If anyone should save it, it should be Hugh Hefner," Poehler went on to say.

Schur replied, "I kind of agree with you, but I don't know why."

Poehler remarked, "Because it's so Hollywood."