Bryan Batt on His Broadway Career

Part Three of Our Four Part Interview with Bryan Batt 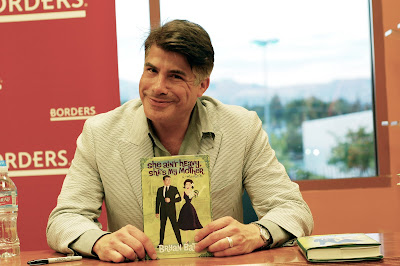 . But long before the cigarette-smoke filled '60s drama, Bryan was belting out tunes on Broadway. From Starlight Express

to Beauty and the Beast

, Bryan has had many adoring fans on the Great White Way over the years.

. We spoke with him more in depth about a few of his roles, his mother's involvement in his career, and the heavy duty star who kick started his career.


PASSIONISTAS: Your mother seemed so supportive of your career choice. Can you talk a little about that?

BRYAN: Always with a smile and very supportive. An important thing I was told very early on, and I mentioned that I always knew that I was loved, but I was told I can do anything. When push came to shove they were very, very supportive. My father was a little reticent about me, particularly about being an actor… quite reticent, in fact. But it was because of Helen Hayes, who happened to be in town for a benefit, and she met my mother. I was at this show, at the benefit and they said to me, "She said your name is the same as that young man that was in the play." And my mother said, "That's our son and he wants to be an actor. But we're trying to discourage him." And she said, "No, No, No. You should encourage him. He's very good." Then Helen Hayes took my mom and dad out to brunch… and I had a matinee, so I couldn't go… And proceeded to talk my father into letting me be an actor.

PASSIONISTAS: That's amazing. How could that not have made the book?

BRYAN: I don’t know why I didn’t put that in there. And then later on when I opened in my first Broadway show, Starlight Express, she sent me a telegram that said, "Welcome to Broadway. May you have a triumphant stay."

PASSIONISTAS: We have chills from head to toe.

BRYAN: It’s still framed on my wall. She was a lovely, lovely lady. When Helen Hayes tells your father your son should be an actor. You gotta listen.

PASSIONISTAS: How did it feel when you got the caricature at Sardis?

BRYAN: I was so honored and I think it was a fluke. I was doing Saturday Night Fever

at the time, and although the show had not been reviewed yet, and I was very fortunate to be reviewed very kindly, considering the rest of the show. But what happened was the producers had offices in the Sardis building. They had previews, and they invited press, and they invited a bunch of people from Sardis. And when the producers asked, "Are you going to do a caricature of the lead?" They said, "No, we want to do Bryan," because they liked the character. So that is how that happened. It was a big honor. In fact Kristen Chenoweth and I got our caricatures at the same party. They had a thing together. It was an honor. It doesn’t happen all the time.

It was up there for a while and then I didn't work. I didn’t do a show. I moved. I opened a store in New Orleans. So my caricature got kind of put in the back next to the bus station. Then with Mad Men... next thing you now it’s right there in the front again. I hope to do something on Broadway or Off-Broadway again soon. I love it. I miss it.

PASSIONISTAS: Of all the crazy costumes you've worn, and it certainly seems like you've worn a lot in your theater career, what was the most uncomfortable costume?

BRYAN: OK. So Disney's been so lovely to me, but I have to say the Lumiere costume. Only because those candles weighed like seven pounds each and you have to keep them up for a long time and it was very constrictive… very constrictive. But, Starlight Express, I had these six pound roller skates on each foot and you had to do hand stands and cartwheels and all this stuff in the dance number, so that was a knee-shredder as well. I have to say those two were probably the most uncomfortable. But wait a minute. What am I saying? La Cage Aux Folles

BRYAN: It was something I thought I'd never get to do. Like I said before, I've said, "I look like a truck in a wig." I was not the prettiest Zaza. I wasn't going to work any runways. But… I really didn't want to do it. I didn't want to standby. But my friend Gary Beach talked to me… who was playing the part… he said "You know, Bryan, I'm going to be filming The Producers. And you’re going to have a lot of stage time." So, that being said I said yes. And I think it was Tom who said, "You have to do it. When are you going to have the opportunity to do something like that again?" And it is. To sing that song center stage with a full orchestra and, of course, a Broadway production. It was magical. It really was.

PASSIONISTAS: Did your mother see you in that show?

BRYAN: Oh yes, she's seen me in every Broadway show I've ever done. I think every Off-Broadway show as well. She loved it. That was one of her favorites. She loved The Scarlet Pimpernel

too. I loved doing that.

PASSIONISTAS: We actually saw you in that.

BRYAN: Oh you did? That was a blast. I didn’t really know the show that well. And then I came… Douglas Sills was taking a break or taking some weeks off and I was to do two a week for him. I just had a blast. It was such a big role and command of the stage. There are 24 scenes and he's in 22 of them. It's a big, big, big juicy role. And you get to have a bow, a solo bow, on a Broadway stage… by yourself? God!

PASSIONISTAS: Is there a revival you'd like to do?

BRYAN: Gosh, you know when they were doing this recent La Cage I really wanted to do it. But timing-wise and everything it didn’t work. In fact they called me when it was first opening in London. I think the lead had had this surgery and they really needed me to get on a plane and come over there instantly and do it. As it turns out I was unavailable. There was no way I could have done it. Now… can I come step in in London? Does the offer still stand?

PASSIONISTAS: Can you talk about the process of creating the role of Darius for Jeffrey

BRYAN: I was actually in Cats at the time, like I say in the book. And my wonderful agent at the time, Bill Timms, who I still keep in touch with, who I just adore, he called and said, "This play came across my desk and I think you're right for this." And I read it and I thought its such your typical chorus boy… a true innocent. I can play that. In fact then I really could play a true innocent. I can be really innocent sometimes. But then I thought, chorus boy. I've never really been your typical chorus boy. I always think of those with dancer bodies. I don’t know why, but I saw him blonde. I saw him fresh out of Hello Dolly. But Paul is such a great writer. I went in to audition and he said, "Finally someone who looks like their headshot." And then at the callbacks he looked at my resume and said, "Are you really in Cats?" And I said, "Yeah. Now and forever." And he said at that moment is when he started re-writing the role to be in Cats because originally the character was to be a dancer in Grand Hotel

But really, to be honest, I think I was a little… it's always best to play tennis with someone who's better than you. Everyone in that company either went to Yale or Julliard or really wonderful classic training and I had really just studied at college and when I got up to New York I went to Circle in the Square for a couple of sessions. But I didn’t have any formal, formal, formal, Conservatory training… I felt I really worked as hard as I could and one of my friends said, "You've done Broadway musicals. None of us have done that. You're doing fine. You’re here." That made me feel so good and part of the cast.

And just doing the play was such heaven. Literally, Paul Rudnick would write new scenes every day practically. And things were just funnier and funnier. I still have somewhere in storage all the cut scenes and the jokes and the lines that were cut. And every day the re-writes would come in on a different color paper and by the end, the irony is, it looked like a rainbow.

We had no idea honestly. I think I put this in the book, how people were going to react. We thought either they were going to run screaming from the theater because it was so irreverent or doubled over laughing and crying and thank god it was the latter. People were very moved through laughter. Was it that line from Steel Magnolias

? "Laughter through tears is my favorite emotion." It was so true and it was wonderfully romantic. At a time when, for a lot of people, romance was on the back burner.

I definitely agree with him and I always had this philosophy that laughter is a cure. Laughter can heal. It's also a great diversion. When I was very young. I’ll never forget discovering this with my cousin Jennifer. We were playing in the backyard and something happened, she had fallen and she started crying, and I thought to myself if I can make her laugh, I won’t get in trouble. And it was this sense of power and also watching laughter turn it all around. Laughter turned tears into something happy. I love that.
Posted by Pop Culture Passionistas at 2:00 AM