The Biggest Loser's Koli Palu was a Sore Loser 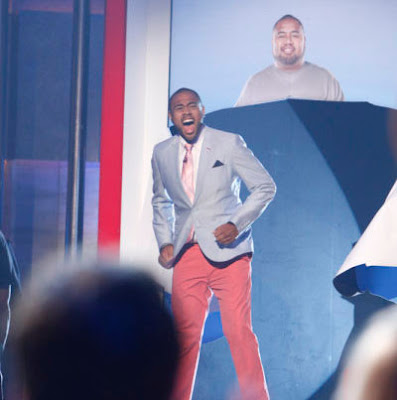 When America votes for someone else over you, it's got to hurt. Especially after having weight and self-esteem issues all your life. So it must have been hard for Koli and Daris to wait and see which of the two  America chose to be in the final three.

When the dapper pink pants-clad Koli punched and growled his way through the life size photo of his former self, he said to The Biggest Loser

host Alison Sweeney, "Don't mistake my confidence, my swagger, for being cocky." Sadly for Koli, that's exactly what America did and why they chose sweet, adorable, dimple-faced Daris to be in the final three and eliminated Koli from the race for Biggest Loser.

For the rest of the evening, and despite winning the $100,000 At-Home Prize, Koli pouted like a sore loser, barely speaking when spoken to. After beating out Darrell and Sherry for runner-up status, all he had to say was, "I just want to go home and be with my family." A nice sentiment if only he had said it without a scowl on his face.

Sadly for Koli, if he had come across as a little more likable, he may have made it into the final three. Had that happened he would have taken home first place with the highest percentage of weight loss at 53.35%.

But enough about pouty, sore losers. Let's talk about triumphant Biggest Losers. Would anyone have thought that the heaviest guy in the house, weighing in at 526 pounds, could ever win the title? Mike lost 50.19% of his body weight, dropping a total of 264 pounds. And while his journey hit some rough patches of self doubt and frustration, he emerged as half the man he used to be sporting a bejeweled skull belt buckle around his now svelte waist.

A few other highlights in case you missed it:
- Daris (who had never kissed a girl before coming to the ranch) now has a beautiful blonde girlfriend, Heather.
- Erik (the Season 3 contestant who regained all the weight) is back down over 150 pounds.
- Shay (the Season 8 player and the heaviest women to ever compete) lost another 52 pounds and gained a $52,000 check from Subway — which she can double if she runs a marathon by year's end.
- O'Neal (who used to walk up stairs like a two-year-old, with both feet landing on each step) skipped down the stairs to show off his new bod.
- Sherry continued the pink lady streak of major transformation from chubby housewife to downright skinny, hot mamma.
- Sam and Stephanie, continuing The Biggest Loser matchmaking streak, are now an item, living healthfully ever after.