Jillian Michaels' the Master of Metabolism 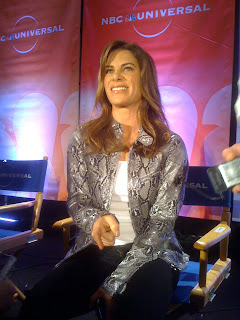 One of the perks of being a “blogger” is that every once in a while you get free stuff. We haven’t been inspired to talk about some of the water bottles or pads of paper we’ve received (although we have to admit we love a good pen).

. Another admission, we’re not the healthiest eaters. We try to put a veggie in our pasta now and then. We like a slice of tomato on our tuna sandwich.

.  Then we noticed there were items like Blueberry Banana Muffins (page 62) and Fudge Brownies (page 254). She had our attention. The treats we’ve made our delicious and almost entirely guilt free – if Jillian says we can eat something, we’re doing so with reckless abandon.

What we didn’t expect was how tasty all the recipes are. We’re addicted to the Chicken Stir Fry with Asparagus, Red Pepper, and Spinach (page 118) and we find ourselves craving the Roasted Russet Fries (page 230). And, really, who knew brown rice could taste so good?

So we think we’ll make ourselves some Chocolate-Cinnamon Frozen Banana Pops (page 242), and pull a TV tray up to the screen on Tuesday, June 1 at 10:00 PM, to watch the new NBC show Losing it with Jillian Michaels.
Posted by Pop Culture Passionistas at 2:00 AM