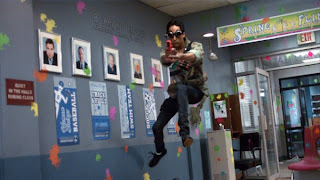 is one of our favorite TV characters of all time. A walking pop culture encyclopedia, who drops movie and TV references at every turn. There's only a few more weeks of Abed before the summer hiatus, but have no fear, he will return in all his pop culture glory next season.

We had the pleasure of speaking with Danny Pudi, the actor who plays Abed, on a recent conference call interview. He talked about what he's learned from his character, his love of vacuuming, and getting Christmas cards from Chevy Chase.


Q: Are you as knowledgeable about pop culture as Abed is?

DANNY: Absolutely not. Abed’s an encyclopedia. He’s kind of a genius. I grew up with a lot of this - a lot of the same movies and music. Even the Starburns: El Star Prince - the minute we started working on that I just was having flashbacks to Starman

back in the day, Jeff Bridges, and the TV show.

So a lot of these things I did grow up with. But Abed is a type of guy who he didn’t just grow up with it but he remembers word for word every scene, character, what they worked on prior to that, cinematographer, key grip. And not only that, he’s able to apply it to everyday world situations.

So the fun, challenging thing about this role is that I’m often given scripts with references that I don’t necessarily remember or get... The next thing you know, you’ll see me Googling My Bodyguard

, for instance, and being like what was this movie about? Or going to Blockbuster and renting all these movies just to make sure I know what I’m talking about.

And then there’s certain ones I definitely know... like Goodfellas

last week, it’s definitely one of my favorite movies or when we referenced Indiana Jones

. Indiana Jones is probably one of my top five movies that no matter where it’s on, I have to watch it. So even if I’m at Best Buy or Radio Shack and it’s playing on a sample TV, I’ll sit there until it’s over. There’s a little bit of that in me. But I think Abed’s a little bit more of an encyclopedia.

Q: Have you found any new personal favorites from the stuff you’ve discovered that you didn’t know before?

DANNY: That’s a good question. I’m trying to think of what are some of the references that I really like. It’s fun going back and watching all the movies. There’s actually a brief bio and I think it’s on the website maybe and also on some flyers that said "[Abed's] favorite movie is..." and it’s a list of thirty movies, including Ghost Busters

, Blade Runner, Indiana Jones I through III, Back to the Future

... I did go through while we were shooting, and just kind of re-watched all of them. And I do have a re-appreciation for Goonies. I love that movie. Man that movie’s fun. You know. Gosh that movie is so fun.

So that was one of those that I wouldn’t say I forgot, but I did maybe a little bit forget how fun that was to watch as a little kid. And then, of course, all the John Hughes stuff going through and re-watching Breakfast Club

and Ferris Bueller’s Day Off

. Especially Breakfast Club… Instead of our theme song, it’s kind of our theme movie and re-watching that a number of times, my appreciation for all of John Hughes films definitely has grown.

Q: How do you think Abed has evolved as a person?

DANNY: You know I think I’m very fortunate, because I think the writers have given me so much rich, rich stuff to work on and expand on. And you never know in a comedy, how things are going to roll out in terms of being a side character. Because I’m technically one of the ensemble.

And to be given all these great, rich things to work on and if you just look at it and think, "Oh he’s a pop culture buff." But the thing about Abed is that he uses all these pop culture references and it comes from a real place, because it’s how he views the world and it’s how he connects things.

So they’re not just gratuitous references for the sake of references. It’s because he's piecing together something that he’s noticed going on around him. And I think last week’s episode was a great example of that in terms of it being a parody of Goodfellas and some of the mob movies but at the end, there was a very heartfelt scene with Joel and I which actually was one of my favorite scenes that I’ve done this season.

That scene really typifies what’s special about our show because it gives you in a very brief moment what makes these characters tick and they’re very honest about it. And then we go right back to a Sixteen Candles moment but there was something very genuine and sweet about that where it’s fun for me to be able to play this character who has such a fun time in the world.

It’s very much a video game in some ways but he’s also a real person on the inside who’s challenged and trying to connect with people and I think that really resonates so it makes the comedy that much better.

Q: Tell us about your year - going from the butt dialer to everybody’s favorite college student.

DANNY: I think that says it all. I don’t really know what’s happened this year. It’s been so bizarre. The last eight to nine months of my life have been really an incredible time.

I was on a flight not too long ago and the flight attendant came up to me and grabbed both of my shoulders and looked me in the eyes, got really close to me and said "Aspergers." She yelled it in my face and that’s all she said. And then she proceeded to bring me two drinks that were pretty much pure vodka.

After that she sprayed some Binaca in her mouth, kissed me on the lips, and said, "That was for Joel McHale." So these are the scenarios that happen now that eight months ago wouldn’t have happened.

Now eight months ago, I would probably have been considered maybe a potentially dangerous person on a flight and now people come up to me and say nice things to me and it’s crazy.

DANNY: Depending on where you live I would love to. Also if you have a lot of pet dander or a lot of dust; like if you did something - for instance, if you just removed some acoustic ceilings, I would love to vacuum your place.

There’s something tremendously gratifying about the process of vacuuming, opening the windows and then just seeing a nicely vacuumed floor. To me one of my favorite things to do in the world because I grew up in Chicago and we always had a lawn that I would love to mow. I love mowing the lawn just because I like seeing the lines and I like fresh cut grass.

I love the smell of it and I also just like the process of going back and forth, back and forth and then finishing it and seeing your fresh product. There’s a beginning, a middle, and an end.

You put some hard work into it. You sweat a little bit. And then afterwards, you can just take off your shoes and run through it, you know; the same thing with a carpet.

DANNY: Oh, yeah. I would say that. Yeah, I would definitely say that. It’s probably something that needs to be addressed at some point before I hurt myself or someone I love.