Did Bret Michaels Get the Sympathy Vote? 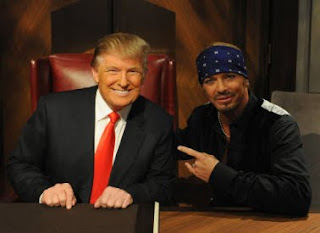 
You bet your Trop-a-Rocka he did. Wouldn't you have picked him, too? The dude survived an emergency appendectomy before suffering from a brain hemorrhage just a few weeks ago and then a mini stroke just days before the finale. But he still showed up to fight for the title of Celebrity Apprentice.

There's no way Trump could let that one go. They didn't even bother to debate the merits of the final challenge. Or state their cases for why they deserved to win.

But Holly didn't walk away a loser. The Donald is really a softie deep down, and with a matching donation from Snapple, he gave both contestants $250,000 for their charities.

But the biggest victory for Michaels? A complete reputation make-over. Six months ago the Poison front man was a semi-washed up rocker who was looking for love with a bunch of strippers on reality TV. Now the whole world is rooting for his recovery and success after seeing the softer, smarter, determined, and dedicated dad side of Bret.

So, was it sympathy that won the show? Maybe, although we can argue he deserved it. The Snapple people clearly preferred his final project head and shoulders over Holly's. He did win both projects he helmed. And he pretty much creatively spear-headed most of Rock Solid's endeavors the entire season.

Sure Holly was tough, and really smart, and fiercely driven, but Bret was the dark horse we all thought would be the first one to hear "You're fired."

We think Bret summed it up best when Trump asked if he thought he had an advantage over Holly, perhaps getting a sympathy vote. The rocker replied, "Once I saw her dress, and I saw she's playing the hotness card, I'll take a vote any way I can get it. If it's sympathy right now, I'm taking it. I didn't travel all this way and in this much pain to lose. I want to win and I'm glad I did the show."