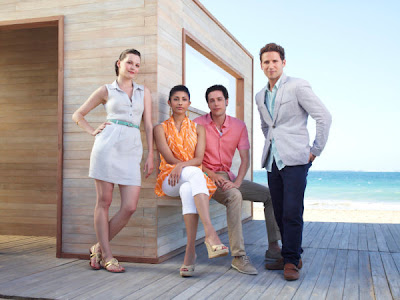 comes back next week for Season 2. Last year, the show debuted as the #1 series on cable and quickly gained a loyal following. Tune in next Thursday, June 3 at 10:00 PM to check it out for yourself. In the meantime, read on to see what Executive Producers Andrew Lenchewski and Michael Rauch told us in a recent interview about Henry Winkler, Mary Lynn Rajskub, and indie music.


Q: Are there any favorite actors of yours that you’d like to snare as guest actors for the show?

MICHAEL: We have a long list of actors that we want to work with in the show. A couple of whom we’re lucky enough to be doing this season, like Marcia Gay Harden. And Henry Winkler is an actor that we’re really excited about. J.B. Smoove, who we’re trying to get into one of the episodes and feel like in terms of his ability as a comedian and actor would fit in really nicely.

Q: Can you talk about Henry Winkler’s role on the show?

ANDREW: We knew, obviously, off of the season one ender, the cliffhanger at the end of the finale that this was the major thing we’d be thinking about and talking about during the hiatus was who would be the perfect guy to play Eddie and Henry Winkler was on the short list from the beginning. But what we didn’t know was that he had watched the show with his wife in season one, every episode, and was by his own admission a huge fan, which was enormously flattering to us. Then we met him and you could just feel the enthusiasm for the show and the passion for all the opportunities this role could present.

He brought a ton of really cool ideas and incredible specificity to his recollection of season one. He was quoting lines from episodes. It just sort of blew us away and we fell in love with him. We cast him and we shot a scene with him in the season premiere for season two and right now we’re shooting our second episode which has him as well and it’s just been fantastic to work with the T.V. icon.

Q: We’re psyched that Mary Lynn Rajskub is going to be on the show. Can you tell us a little bit about working with her?

ANDREW: Yes. It’s been a real thrill. I think we both were huge fans of her work on 24

and I think as far as we know this is the first guest starring role she’s done since she came on 24, at least since 24 started to unwind. But she couldn’t be playing a role more different from Chloe on 24. She’s actually going to be in the second episode as the stepdaughter of Mrs. Newburg played by Christine Ebersole, who is a recurring character throughout the first season.  She just brings a really great warmth and humanity to the character she’s playing along with her trademark quirky sense of humor. It’s been really cool to work with her.

Q: Can you tell us what Big Show [from WWE wrestler] is going to be doing on the show this season.

MICHAEL: Big Show starts shooting tomorrow and he’s going to be in our third episode of the season playing an actor who is in a kind of cult horror film franchise and his characters name is Garbage Collector. He’s hanging out in the Hamptons as part of his getting ready to do the next film and something goes wrong with him medically and he becomes a patient of Hanks.

Mark Feuerstein, who plays Hank, and the actor Paul White, who is AKA Big Show, actually did a movie this past summer together. So they’ve worked together before which is how we came up with the idea of using him in the show because Mark had such a good time with working with him and said it might be fun to put this guy in the show. And Andrew and I saw him and saw his dimensions and thought it would be a lot of fun to put someone whose 485 lbs., 7 ft. 2 in. in an episode with Mark.

ANDREW: And the other part of the crossover is that Mark’s going to be doing a surprise guest appearance, although I guess it’s not so surprise anymore now that I just said it, on Monday Night Raw

so we’re all looking forward to that.

Q: It seems like music is an important part of your show. You use a lot of Indie artists. Can you talk a little bit about the music choices you make for the show?

MICHAEL: Music really is important to us, both within the show and outside of the show and we felt like the whole kind of notion of the show in terms of being a concierge doctor was something that felt like it had not been done before and was new. We felt that we wanted to try as often as possible to bring in things that felt unfamiliar and music felt like a great way to do that. To bring in songs that you didn’t have, you didn’t remember things when you heard them in other shows, other movies but really would feel fresh in the show and also being able to have the opportunity to give Indie bands breaks.

We have a great music team. Our composer, Jim Levine, we have music supervisors, Oliver Hild and Alicen Schneider and they really feed us amazing music. And we’re able to pick from a great selection to lay in certain tracks that play the best against the scenes we’re looking for. So we’re glad you noticed that because it really is a big part of the show and it hasn’t gotten much attention yet but we’re hoping that we’re able to put together a compellation of some really great songs.
Posted by Pop Culture Passionistas at 2:00 AM