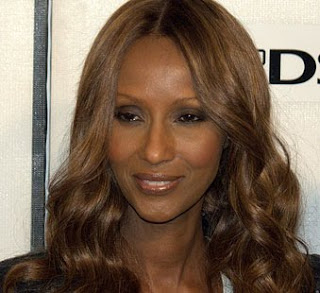 
Bravo just announced that fashion icon Iman will join the second season of The Fashion Show as Isaac Mizrahi's co-host. Isaac's previous partner Kelly Rowland will not be returning.

moved to Lifetime. We thought for sure, how could another show, with the exact same premise, possibly live up to the reality TV classic?

But, it did. We love The Fashion Show almost as much as Runway. And while Isaac is no Tim Gunn, we think Iman will be a welcome addition in mentoring the hopeful fashion designers and judging their creations.

Plus we're hoping this means Iman's hubby, rock star and fashion icon in his own right, David Bowie might stop by to participate in a challenge.

If you think you have what it takes to winn the competition, it's not to late to try out. The final open auditions are being held this Sunday, May 16 in New York and next Saturday, May 22 in Chicago. Check the Bravo website for more details.
Posted by Pop Culture Passionistas at 2:00 AM