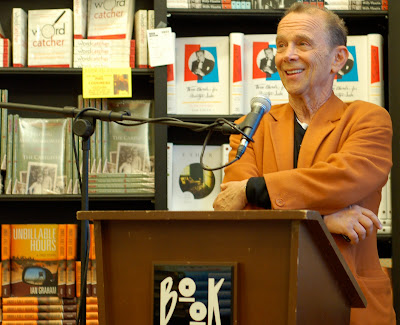 Photo by: Pop Culture Passionistas
When we heard Joel Grey, the legendary star of Cabaret

, was appearing live and in person at Book Soup in Hollywood, we had to go. After all, he's been one of our favorite musical stars for a very long time. And although he's still performing, he has found a second calling — photography.

, Grey's third photography book, will hit the shelves on June 2. Since you can't read from a photo book, after his brief explanation of how the project came about, he was off like a flash to sign copies in the back of the store. But this is what he did say.

One day a few years ago he found himself in Florida without his trusty 35mm Nikkormat Nikon, so he decided to give his camera phone a shot. He said, "This is a very lowly, phone. 1.3 mega pixels. The worst you can get and I guess a very, very simple lens. So I took a few pictures and I have a wonderful photo editor and book designer. And I came home and I said, 'Look at these weird things. I took these, about a dozen pictures.' And he said, 'It's your next book.' So I took pictures for about a year and it, in fact, did become my next book."

He went on to describe his creative process, "I like sorting out what I'm seeing. Almost always the photographs that I take are about what I don't quite understand. Why is that color like that. What is that? And I take the picture and all of a sudden I know what I need to know."

But don't look for Joel to upgrade to an iPhone any time soon. "I find that the iPhone makes very, very beautiful, nice pictures, but they look more like regular photographs. This [camera phone] skews things somehow because it's so primitive... it adds something — or detracts — but whatever it is, if it turns out to be better than I thought, then it stays."

And Joel doesn't just spit the images out of a desktop HP or Epson printer. They go to one of the last great film printers in New York, Laumont. The photos are printed on cibachrome film, a truly lost art with, as Joel says, "the very blackest, blacks."

If you are lucky enough to live in New York, you can see the actual prints at the Steven Kasher Gallery gallery from May 27 through July 10. The rest of us can enjoy the work by buying the book. For a taste, you can see some of the images at the gallery's website.

Joel left us with one final thought about his new adventure. "As you know, today everyone is a photographer. The world is a photographer. People are just taking pictures all the time. And that's great. They get a lot of pleasure out of it, but they are not all photographers. They take pictures. And I was glad to find out that some one thought I was."
Posted by Pop Culture Passionistas at 2:00 PM