Melissa Sue Anderson Signs The Way I See It - Her Memoir 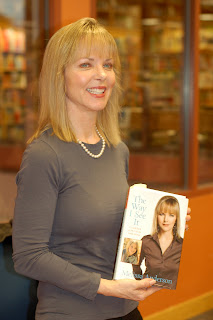 Growing up we loved Little House on the Prairie

. Mary and Laura Ingalls were just about our ages, best friends, and part of a big, loving family. Besides not being able to understand how any kid could survive without electricity (something we still grapple with), we felt like kindred spirits with Half-Pint and Mary.

So, imagine our excitement when we heard that Melissa Sue Anderson, who played the eldest Ingalls daughter, had written a book about the show and was doing a book signing. What we didn’t expect was that this was one of the most entertaining book tour events we’ve ever witnessed.

Yes, Melissa Anderson (she’s dropped the Sue if you’re searching Amazon for her book) did the requisite excerpt readings from The Way I See It: A Look Back at My Life on Little House

. But she also acted out scenes from the memoir with volunteers from the audience (a packed house we might add). In a clever twist on the typical celebrity retrospective, Anderson has written certain memories out in script format. So fans co-starred in a few skits playing Melissa’s Mom, Michael Landon, and the show’s script supervisor.

Also contrary to what you might expect from the ruminations of a former child star, this is not a dark tell-all about the seedy underbelly of being a mistreated kid in TInseltown. Missy wanted to tell a positive story about an experience that clearly helped shape her into a really well balanced adult.

This is evidenced by her post Little House career. Rather than fall into the usual Hollywood trappings, Anderson got married to TV writer Michael Sloan. She retired from acting to raise two children. Still married 20 years later, and with her youngest now 14-years-old, Melissa said she’s ready to get back to work.

Melissa’s still on the road signing away for the next week. Check out the Facebook Melissa Sue Anderson Fan page to see if she’s stopping off in your town. If she is, go. You won’t be sorry.

Those of us who showed up in Northridge last night were treated to a very special book signing treat. Alison Arngrim, who played Nelly Oleson dropped in to surprise her former onscreen rival and offscreen friend. And some good news for all you Nellie fans out there, her own memoir Confessions of a Prairie Bitch

hits bookstores on June 15 (but you can pre-order now). Check out her book tour schedule on the Alison Arngrim Fan Page on Facebook. 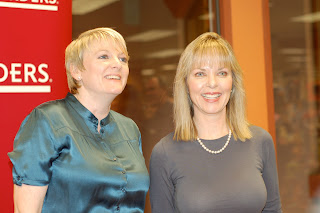