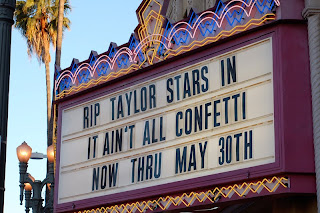 Tonight we had one of the most unique experiences two people could have at the theater when we saw Mr. Rip Taylor's one man show It Ain't All Confetti.

We know the Prince of Pandemonium as the confetti throwing comedian who used to make our mother laugh so hard she jiggled uncontrollably with tears welling up in her eyes. We loved the Master of Mayhem, too, as he galavanted around the stage on The Mike Douglas Show

Taylor kicked off Confetti with a barrage of classically silly one-liners ("I was reading the obituaries and everybody died in alphabetical order today"). And then launched into a string of prop jokes (including a honking shoe horn) that made our sides ache.

Then the show took a dramatic turn. Rip took off his toupe and exposed both the dark and illuminating moments of his life story. He delved deep into tales of childhood abuse, run-ins with celebs like Jackie Gleason, and the amazing circumstances that led to one of the most glittering careers in comedy history.

Along the way we were reminded how groundbreaking Taylor's routines were. Long before Andy Kaufman sang along to the Mighty Mouse Theme Song, Rip was pantomiming to Japanese records in a Chinese restaurant in Tokyo. Before Carrot Top ever opened a trunk, Rip had them rolling in the aisles with visual gags like pantyhose (underwear attached to a garden hose) and cocaine (Coke cans stuck on a walking stick).

(23 times) to the Vegas Strip to Broadway. And his celebrity antecdotes were intermingled with touching tales of his days as a page in the U.S. Senate to his emotional high school reunion. The latter reminiscence brought the Crying Comedian to tears.

But most of all, Confetti is about the love of performing, the comfort of the spotlight, and the joy of laughter.

Among the many treats we'll savor was that Laugh In

's Jo Anne Worley sat just a few seats away from us. We could hear her famous laugh ringing out. And when the show ended she passed us and said, "Wasn't that wonderful?" It truly was.