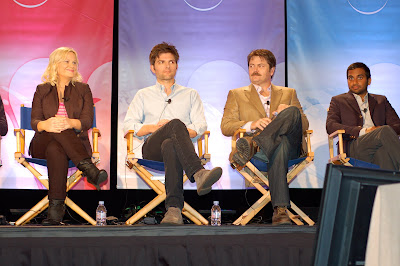 has just consistently gotten funnier each week it's been on. So if you enjoyed last episode's party at the Snakehole Lounge, you'll love the season finale tonight. We got a sneak peak and you don't want to miss it.

We got a chance to see the cast of Parks and Recreation twice in the last few weeks. Here's what Amy Poehler (who plays Leslie Knope), Aziz Ansari (who plays Tom Haverford), and Executive Producer Michael Schur had to say about the amazing cast, Leslie's optimism, guest stars, and punk ass book jockeys.

MICHAEL: The cast was great I think maybe, before the show was great. You have the script, you have the idea that's poignant, then somebody comes along and brings so much of their own life to the character and you try to incorporate it and it becomes much more alive. It takes time sometimes. I think that right now your character's so much cooler, Amy, because of the stuff you've brought to it… It's like practice makes perfect… or practice makes better. I won’t say perfect.

Q: Has the changing landscape of TV affected how you write the show?

MICHAEL: All you can really do is get a bunch of funny people and good writers and try to write what you think is good television and the style that I literally learned from Greg on The Office

is a style that is about creating good stories and having interesting characters that have three dimensional personalities, that are funny and a combination that don’t all talk the same… all you can control is the end product.

AMY: You mention that our characters are three-dimensional and it made me think that maybe NBC should promote our show as being 3D… but you wear glasses over your heart.

Q: Have you had any reaction from people in actual government that stop you when seeing you at an airport?

AMY: Yeah. All the time. In fact, we did a really fun Q&A, and we had some people from local governments come in. One of the things they say, "You guys really nailed it how everybody hates the library." Funny. "They think they're so great and always get whatever they want." And a couple people showed up with shirts quoting a line from the show that says "Punk ass book jockeys." That's what we called the library.

MICHAEL: We have gotten a fair amount of feedback. It's funny because, you know, at this point -- and this is the way we always intended it -- it was always like their work setting is good to generate stories and it's interesting and it's a world that hasn't been too overdeveloped in the TV landscape. But now we just think of them as characters, and we think a lot more about their personal lives and their work lives and things like that. It's the way it should be, and it's always really funny when someone comes up and quotes some incredibly specific thing. It was the thing we literally made up... And it's very funny to see. There's a group of people in the world who are watching the show with a very different lens than the average viewer, which is great. The more the merrier.

Q: Can you talk about this latest storyline development for the character of Leslie?

AMY: Well, I think the struggle throughout the series, frankly, is for her to not become cynical. We always talked about the fact that she starts out so incredibly optimistic and that she realizes how hard it is to get the smallest things done. I think the series is about trying to make changes without becoming cynical. This is a tough time for her in terms of just trying to actually keep the department together and having to put aside bigger plans for the immediate fixing of -- and also just the fact that, like most local governments, there's no money. In fact, Adam and I have a scene where he shows us what departments are ahead of us in terms of what's important, and the parks department is really low.

Q: Do you have any guest stars planned for next season?

AMY: Aziz is in charge of casting this Thanksgiving year, right? Who is going to come on?

AZIZ: I've been really pushing for more of those old-school one TV show crossing into another TV show. In one episode that I pitched, there's a serial killer running around in the park. Who happens to drop by? A little guy known as The Mentalist

And then there's an episode that I pitched where we meet Tom's brother, and his name is Chandler Bing. Ring a bell?

AZIZ: His brother's name is Joseph Tribiani. Ring a bell?

MICHAEL: His name is Darmish.