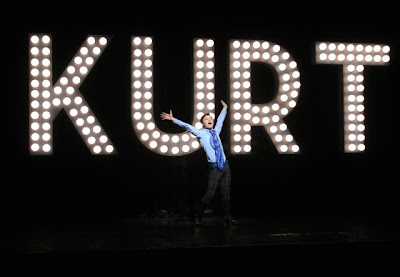 If you haven't seen last week's episode of Glee

(or for that matter, even if you have), do yourself a favor and watch it... over and over. Chris Colfer's performance of Rose's Turn from Gypsy

is stunning. And when you consider that Glee is Chris' first professional acting gig, it's even more staggering.

You can feel the pain oozing from his pores and see the agony in his eyes, not knowing how to relate to his dad. Kurt has been one of our favorite Glee characters since day one, and now his relationship with his father is giving us another reason to fall in love with him.

We talked to Chris at an event for the Archive of American Television about singing that song and what it's like to be on Glee.