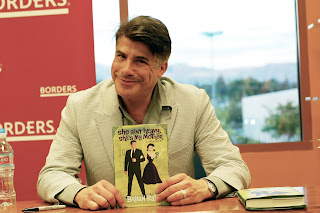 
As the BP drama continues to unfold along the Gulf Coast and John Goodman’s HBO series Treme wraps up its first season this weekend, we have New Orleans on the brain. And no one shares a passion for the Big Easy quite as articulately as Mad Men’s Bryan Batt. Not only is his new memoir She Ain’t Heavy, She’s My Mother a love letter to the vibrant woman who raised him to follow his dreams, it’s an homage to the city that he’s always called home.

In a recent interview, Bryan talked about living in a post-Katrina New Orleans and the good people of the fine city:

“It was so interesting. I just did an interview today and the moderator… said, ‘You’ve shed light on a whole different group of New Orleans that people really don’t know about.’ And it’s true, every city and every society has so many different layers. But the good thing about New Orleans is that everybody touches upon everybody else… we cross all borders."

I love the new series Treme, by the way, it’s fantastic. But, I literally was shouting with joy when John Goodman took that reporter’s camera and threw it in the river. And he was saying… this is a man made disaster. And so many people don’t really realize that. They think, ‘Oh, it was a storm.' No, the levees breeched because they were improperly built and maintained from the beginning by the Army Corps of Engineers. And no one wants to really admit that. And that is the truth. A study came out by the federal government blaming the Army Corps of Engineers for the levee failure.”

Batt had mentioned in his book that no one focused on the good stories about New Orleans in the wake of Hurricane Katrina. We asked him to share his positive stories:

“All the good people… One of my friends rescued over 250 people in his boat. And my second cousin, Brandon, stayed against his father’s will, came back, got his boat, and just went around… and saved people."

"And just the people coming down to see and rebuild. I mean every week, and even still now sporadically they’re here now. But still for the first few years – and this is just my little Methodist Church next door to my house where I was living – every Sunday there were contingencies of people coming down to help rebuild. Constant."

"And, of course, the news itself is never the positive, unfortunately. But like I said, on Treme, when I saw John Goodman say that, it just made me so unhappy when a lot of people didn’t realize that 75% of the city was flooded. 75% of my family was flooded. The floodwaters knew no prejudice – race or socio-economic level. I mean my brother had nine feet of water in his house – just gone. He rebuilt it but I mean everything was wood.”

So, we asked him what was left to be done in the Big Easy, from an insider’s perspective:

“There’s a lot [of work to be done]. So many people have not been able to get back to their homes or rebuild them. You’ll see in flooded areas like in the ninth ward especially and Lake View, which was, I wouldn’t say all affluent, but it was definitely upper middle class neighborhoods. There’ll be three or four houses on a block that are back and maybe two or four that are not. And there’s still a lot of work to be done."

"There’s some people… that can’t come back so they’re relocating. And no city in America… has ever had to really deal with this kind of massive destruction. How do you say a person still owns that property? They’re still paying a mortgage on a blighted, uninhabitable house. And at what point do you say, ‘You know what, does the government buy it?’ How do you handle this?"

"There’s still that element of, there’s a lot of homes that need to be rebuilt. And unfortunately a lot of people were not fully covered by insurance. And a lot of the insurance companies now it’s impossible to write a policy. And it’s very hard to get insured. Tom and I just bought a house and thank God it was in a non-flooded area. Now there’s a law that you can transfer, you can get insurance.”
Posted by Pop Culture Passionistas at 2:00 PM