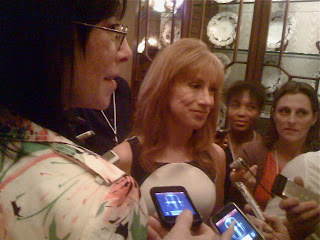 in hardcover. But for those who haven’t or didn’t get enough the first time around, the tell-all is now available in paperback.

It’s worth a read. There’s a bit of the normal D-Lister celebrity gossip inside. But mostly Kathy dishes on herself. She shares a lot of info about food-driven flings with donut makers, a staged romance with Steve Wozniak, and the heartfelt drama of her troubled marriage.

Along the way she reveals a really dark family secret, drops a few names, and mostly just makes it clear how important work is to her and how much energy she puts into what has become a mega-watt Hollywood career. Plus the paperback has an added chapter that wasn’t in the original hardcover version.

We have even more good news for you. Kathy isn’t the only Griffin to have a good beach book on shelves this summer. Mom Maggie’s memoir Tip It: The World According to Maggie

comes out on June 29. Mom and daughter are embarking on a dual book tour this summer so keep your eyes peeled for a date near you.
Posted by Pop Culture Passionistas at 2:00 AM