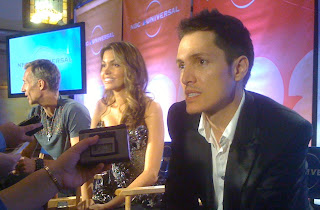 There are many new summer offerings popping up on TV screens in recent weeks. But our new favorite is Bravo’s Double Exposure. The docudrama follows the photography team of Markus Klinko, Indrani Pal-Chaudhuri, and their stylist GK Reid. The glamorous jet setters travel the world working with everyone from Eve to Anne Hathaway.

Unlike most shows that try to appeal to a viewers comfort level by presenting relatable characters, the stars of Double Exposure seem completely unhuman to us. In fact, watching the show is almost like viewing an alternate reality version of Mutual of Omaha’s Wild Kingdom where couture replaces khaki and celebrities take the place of cougars.

The drama in the show comes from the tension between Markus and Indrani. The former couple continued to work together once their romance sizzled. But their constant outbursts bring tension to their sets and make for drama during their shoots. At times it seems as if the infighting will topple their successful business.

That’s where soft-spoken stylist GK comes in. He manages to work around the egos and keep even the most precarious production on track.

In a recent interview with Reid at the NBC Universal Summer Press event, he explained how he maintains his cool in the midst of Klinko and Pal-Chaudhuri’s disputes, “Sometimes being in the middle can be difficult but... I respect them and I know that their intentions are good and that they care for each other and that's what makes me being able to handle it.”

And he sees how their arguments are beneficial adding, “Because I know that even though they get really hard with each other and myself, they're just blowing off steam and tension. And that's kind of the outcome of the pressure that we put on ourselves to achieve great pictures and... deadlines.”

And deadlines, it seems, are the biggest threat to the success of the team’s shoots. Reid continued, “The truth of it is, whether it comes out on the show or not, that we really are under immense deadlines and we really do have a lot of pressure all the time and I don't know how that will translate to the show but we know that it's real.”

Catch all new episodes of Double Exposure on Tuesday at 10:00 PM on Bravo.