Molly Ringwald Presents Her New Book: Getting the Pretty Back 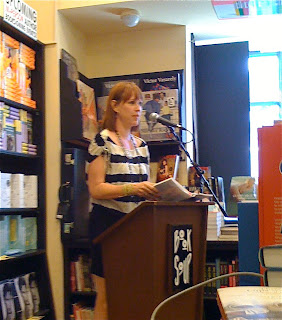 Before Molly Ringwald took to the podium for a presentation of her new book Getting the Pretty Back: Friendship, Family, and Finding the Perfect Lipstick

at Book Soup in Los Angeles last week, the instructions were clear. Molly would not be officially posing for photographs, she would read a few excerpts from the tome, and answer a few questions. The store's rep outlined the rules - keep your queries to the topic of the book. In other words, don't ask her about The Breakfast Club, the Brat Pack, or John Hughes.

She dove right into the first chapter "Isn't it Pretty to Think So," explaining that to her, pretty isn't physical, it's "an attitude inside."

She revealed that her book is divided into nine chapters as "a nod to J.D. Salinger's Nine Stories." Among the topics she covers are friendship, food, motherhood, hair, and as she put it, “a very short chapter on fitness."

During the presentation she also read about the "holy trifecta" of food - bread, wine, and cheese. This chapter in the book focuses on the period she lived in France, where she learned to "never cut the nose of the cheese." Not only didn't we know that fromage had a nose, we didn't know you we're supposed to slice there. Apparently the French find it rude and, instead, cut from the rind end or along the side of the wedge.

And then the questions began. Needless to say, the first fan (a grown man who appeared to be in his 40s) stood and awkwardly blurted out, "I want to congratulate you on the 25th anniversary of The Breakfast Club... How many of the following have you and your fellow Brat Packers appeared on - Family Feud, Weakest Link, Dog Eat Dog? Because I've always felt like any excuse you can give for a Brat Pack reunion is a good excuse."

We watched Molly's face as the question was asked. She was poised. She was polite. But she looked like she was dying just a tiny little bit inside. But she didn't let the pretty get knocked out of her. She simply replied, "To my knowledge, I don't think any of us have appeared on any of those shows.” Quickly shifting to, “Any other questions?"

Not getting the clue, her next fan asked, "What was your favorite movie to make?"

Again sidestepping the teen movie chatter, Molly replied, "Probably my first movie because it was my first. It was called Tempest and it was filmed in Greece. And I think because I had never made a movie before and I actually had never been out of California before so I got to travel to Greece and Rome and New York. And it was [with] John Cassavetes, Gena Rowlands, [and] Susan Sarandon. It was an amazing experience. And I think next to that one, all the John Hughes movies that I did were really fun - especially Sixteen Candles."

There. She said it. The elephant in the room could now leave the building.

The remainder of the questions were, as Molly had hoped, about the book. Including why she wrote it to begin with.

She explained, "I was turning 40 years old and I felt like there really weren't any books that were being written that were sort of upbeat and fun and colorful. And I have the advantage, because of my career, so many people feel like they grew up with me, and they did grow up with me. We grew up together. And I really wanted to write a book that was like sitting with a girlfriend and sort of talking about life. Because I've always found it very comforting to read books that I relate to through difficult times. And so that's the kind of feeling that I wanted for this book."

She pulled it off, too. With its conversational style, great tips, and heartfelt advice, the book almost makes you feel like you're sitting on the floor of the school library talking to Claire Standish in The Breakfast Club” But, of course, you know she won't talk to you in the hall when she sees you on Monday.
Posted by Pop Culture Passionistas at 2:00 AM