How the Beekman Boys Became Fabulous 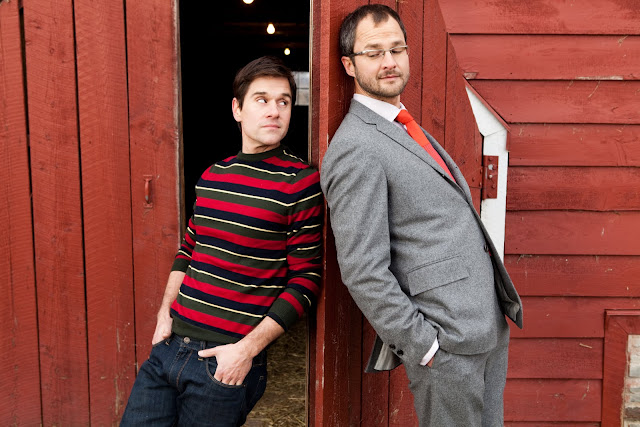 There's a new favorite show in the land of Pop Culture Passionistas. Brent and Josh, The Fabulous Beekman Boys, have re-invented Green Acres

— two city clickers who gave up their glamorous lives in New York City to go green on a farm upstate.

Brent is a doctor who used to work for the domestic goddess Martha Stewart and Josh is a marketing exec and former drag queen named Aqua. But in 2008, the couple bought the Beekman Mansion in Sharon Springs, New York, and started a new life raising goats, growing organic food, and practicing the ways of seasonal living. They also launched a product line called Beekman 1802 selling soap, cheese, linens, stationary, and more — straight from the farm, using local ingredients, materials, and the talent of nearby artisans.

And every Wednesday on Planet Green we get to watch as the two newbie farmers navigate the world of cleaning barns, buying pigs, making cheese, and staying together.

We had the chance to talk with Brent and Josh about the show. After the jump, read what they had to say about life before the Beekman and how the show came to be.
Buying the Farm

PASSIONISTAS: What prompted you to change your lives, buy the mansion, and start Beekman 1802? What order did that all happen in and at what point in that did you decide that this was going to be a full-time lifestyle change?

BRENT: Well, we were both working in the city and thought we wanted a weekend place. And we had been on a weekend excursion in upstate New York to go apple picking and drove by the farm, the Beekman, and saw the for sale sign in the yard and decided we had to have it. And when we first did, it wasn’t a working farm, and we just thought it would be a weekend place and we would have a vegetable garden and that would be it.

And then about two weeks after we had purchased the place we had a note in our mailbox from Farmer John. And he said that he had a small herd of goats and he was losing his farm, and could he bring his goats to the Beekman. And so we had a discussion amongst ourselves and decided, yes that would be okay, or basically Josh decided it would be okay.

BRENT: And so John moved in. And for a while we were just thinking what all can we make for ourselves with the goat milk. And so we had started making our own yogurt and our own soft cheeses. And then we were like, “What else can we do with it?” And we said, “Oh, goat milk soap.”

And so that first winter we were just making goat milk soap for ourselves. And we noticed how great our skin was because the winters here are really harsh. And we thought this is really good soap. And I was working at Martha Stewart at the time and I was trying to think of what to give her for a Christmas present and I thought, “Why don’t I just make her some soap. That’ll be a unique thing.” And so I gave it to her and she loved it. And she said, “Why don’t we make this on the show?”

And so at that point we were like, “Wow, if we’re gonna make this on the show, everyone’s going to want it. So we should make a little business so we can sell it on the website.” And that’s really how we launched the company. We knew that that show was going to air on April 23, and so that’s really our first day of business, was on the Martha show.

JOSH: So that was in 2008. And then in the Fall of 2008, the great recession hit and we both lost our jobs. At that point we decided that, if we were going to keep the farm, we really had to make a go of it, otherwise we wouldn’t be able to pay for it. And so that was when Brent really decided to start working on the business full-time.

PASSIONISTAS: So that was why Brent became the full-time farmer and you continued to work in the city? We were wondering how that decision got made.

JOSH: It was actually whoever got a job first. It was a recession and we were both in the media field and we didn’t know if we’d ever work again.

BRENT: And truthfully, I’m much better at running a business than Josh.

JOSH: Is that the truth, Brent? Is that really the truth?... I mean everything happens for a reason.

PASSIONISTAS: Was the show your idea or did somebody else approach you about it?

JOSH: We started the farm business about three years ago and part of that was we started the website and we sent out newsletters to a mailing list. And the president of Planet Green got on our mailing list and she received two or three of the newsletters and she called us and asked if we’d meet her in her office and she said, “I think you might have a TV show.”

PASSIONISTAS: Were you into it right away or were you nervous about being on camera?

JOSH: Well, we were nervous, of course, about a reality show. I would think everbody is always a little leery about opening up their lives. But knowing that it was Planet Green, and also the production company, Worlds of Wonder has done some pretty good shows, it made us feel very comfortable. And we also really wanted a platform to talk about small farming and small communities in America so we sort of took a gamble.

PASSIONISTAS: Were you interested in local products, farming, and organic food before you bought the farm, or is this something that's developed since then?

JOSH: Oh no. We've always been interested in that. We both grew up in rural areas. Our families were not very wealthy so we always gardened and grew our own food. In the city we went to the Farmers' Market every week. And when we brought our apartment that we're in now, we made sure it had an outdoor space, a rooftop. And before we bought the Beekman, we were growing, we had a full garden on our rooftop. Everybody else grows flowers and shrubs, and we had a rooftop vegetable garden.

PASSIONISTAS: Josh, do you still perform as Aqua?

JOSH: No. I gave that up years ago. I do miss it. It was fun. It was an interesting time in my life, but it also wasn't the healthiest time in my life. And Brent actually was a big part in me cleaning up my act and living a healthier life. I do miss the fun and the sparkle, but I don't think I could ever go back.

PASSIONISTAS: Brent, what did you learn working with Martha Stewart that's helped you most while building the 1802 brand?

JOSH: How to nag other people?

BRENT: Though, that's very important. I think paying attention to details is very critical. And quality. Having a quality standard is very important. And being exacting. Knowing what you want and pursuing it. And being above teasing. And this is probably the official truth, if you really want something done a specific way or a right way, the best way to do it is to do it yourself. And so that's why you see me being so kind of demanding on the show, it's because I believe that.

PASSIONISTAS: What do your family and friends think of this lifestyle change?

JOSH: Everybody is really supportive… A lot of people want to come visit the farm and it’s always interesting to see who wants to come visit a second time. Because we put them to work when they’re there. And I think some people watching the show think that it’s not reality, that “Oh, well, here’s two rich city guys that bought this farm and it’s not really a farm.” But the farm is a ton of work and we beg, borrow, and steal as much help as we can. And, even with the television show, it’s still a month-to-month question whether we can keep it going. Every small farmer, we’re not unique in any way, every small farmer is facing the same challenges.

PASSIONISTAS: Has the farming community responded to the show? Are you hearing from other farmers now that the show is on the air?

BRENT: Ya, we’re getting [feedback] from farmers all over the country, small farmers, who are very grateful that we’re putting the spotlight on the struggles of a small farm. And they’re realizing that some of the things that we’re doing are to be funny and that’s just our personalities. But they realize that we have a greater purpose in doing the show. And they’re very appreciative of that.

Tips for Living a Healthier Life

PASSIONISTAS: Have you learned one important tip that you could give people about living a healthier life now that you're in this new world?

BRENT: Well, of course, I have to put on my doctor hat. And I think that the thing that I learned was always what I would want to communicate with people is we've gotten so accustomed to instant gratification in our culture. So we want something and then we go out and get it. And then we consume it without even really appreciating it.

And I think what I've learned about being on the farm and taking a seasonal approach to life is that when you have X you have it for that brief period of time. And then you don't have it. So then by the next time you do have it you really appreciate it. And I think that if more people would look at all aspects of their lives that way we would be a lot better off. If we learned to take the time to appreciate things, whether it's the food that's on our plate and the way that we put it into out bodies, or the other products that we buy, we'd all be a lot healthier.


For other TV interviews check out:
My Life on the D-List Returns June 15
An Interview with the Women of Jersey Couture
Double Exposure: Photo, Feeds, and Fashion

Posted by Pop Culture Passionistas at 11:00 AM