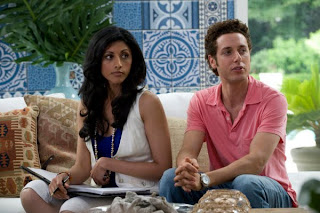 , starring Mark Feuerstein, Paulo Costanzo, Reshma Shetty and Jill Flint, premieres tomorrow night on USA Network at 10:00 PM. Here's part two of our interview with Executive Producers Andrew Lenchewski and Michael Rauch. They gave us some insight into the differences in doing a cable show versus a network show and answer the burning question will Divya and Evan hookup?


Q: Dr. Hank Lawson is the perfect fish out of water and he really fits in the whole USA Network of shows. How did you present the concept and how did you get in with USA?

ANDREW: The concept came from a friend of mine whose family had been using a concierge physician and he asked me if I thought it might be a good idea for a TV show and I said I thought it was the perfect idea for a TV show. So along with two of our fellow executive producers that work with me and Michael, Rich Frank and Paul Frank, we went into USA and we pitched them the idea and serendipitously they had just acquired the rights to air reruns of House

on the network and I think they we’re looking for an original medical drama to pair with it.  So our timing couldn’t have been better and they really embraced the idea of doing something in this blue skies world of the Hamptons centered on a strong central character like Hank. They bought the idea and then I went off to write the script and then they picked that up, the pilot.

Q: How would that show be different on ABC or CBS or FOX?

ANDREW: I think that, first of all, it’s just such a different business being in the broadcast business versus being in the cable business. They picked our pilot up along with one other pilot, which was the White Collar pilot during that development cycle and they were the only two pilots they made that year. Where as if we had been in contention at ABC we would have been competing against 10 or 20 other pilots and immediately your chances of really being nurtured and ultimately being picked up are so much smaller. We had an enormous amount of support, enormous amount of attention, and then ultimately when we got picked up, the series, we benefited from the fact that they were throwing all of their promotional and marketing muscle behind just one show and I think that really paid off in the end for us.

Q: Do you have any trouble finding enough medical maladies for the show? You guys have done some really great ones, so far. Is it difficult to come up with?

ANDREW: Yes and no. One of our writers, Carol Flint, has a common refrain she uses. She worked on ER

for a bunch of seasons and she liked to say that there’s only so many things that can go wrong with the human body. While that’s true, we have the benefit of a brilliant medical advisor named Irv Danesh, or as he’s called here on set, Dr. Irv, who runs an ER outside of Boston and he’s just a story engine. He has not only a ton of stories to tell but has great ways of getting into medical stories in new and innovative ways and it just helps keep the medicine fresh week to week for us.

Q: Will Divya and Evan ever get together? Viewers love watching them fight, but will they ever hookup?

MICHAEL: It depends who you’re asking. We have a disagreement in the writers’ room about that, but one of the things that we love is their dynamic together and the tension they have between each other. The big question is if they ever do hookup would it destroy that… would it make it even stronger. We don’t know yet, so we can’t tell you. But I would definitely say just keep watching and at some point we’ll all find out.

Q: If Hank and Jill don’t get together do you guys have other love interests in the meantime?

MICHAEL: We definitely last year had Jill with her husband, ex-husband, Charlie, and now this season, that they’re taking some time off from each other we definitely do want to explore the possibility of Hank meeting some other women as well. We definitely have a character in mind who we’ll be introducing early on.
Posted by Pop Culture Passionistas at 2:00 PM