My Life on the D-List Returns June 15 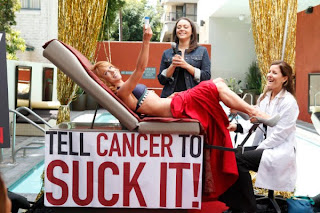 The sixth season of Kathy Griffin: My Life on the D-List

starts next Tuesday, June 15 at 9:00 PM. Yeah! We love Kathy and we're so counting the days until she's back. We had the chance to sit in on a panel discussion a few weeks back with Kathy and her "team" Tom and Tiffany. The no holds barred actress and comedian revealed a few tidbits about what to expect this season.


Q: Kristin Chenoweth guest stars this season. What was it like working with her?

KATHY: Kristin Chenoweth is so [expletive] cool, and she's a Christian who thinks I'm funny, which has never happened. So somehow she's like a forward-thinking Christian, and I very much appreciate that she was on My Life on the D-List because I like to make fun of the Jesus, but she brought the heat. She was great.

Q: Now, when you get to know someone and like someone as obviously you and Kristin did, do you have to lay off then?

KATHY GRIFFIN: No, no. Nobody gets a free pass. Now, the thing is that someone like Kristin Chenoweth has a great sense of humor about herself, and so that's not really someone I would target because I'm very focused on Oprah and Ryan Seacrest.

And did you guys read that Kitty Kelley book? I can't wait to read that. You know, she called me for a quote, and I was too scared to even talk to Kitty Kelley. But believe me, I'm going to read it cover to cover.

So somebody who has a sense of humor about themselves is less likely to be in the act or made fun of. But, no, it's all fair game. It's a little hard when I've met someone and they're friendly, but then you have your Sharon Stones, and they [expletive] bring the crazy every time you see them really consistently. So while I think Sharon Stone is glamorous and beautiful and actually pretty funny, she also gives a lot of good material. And then you have the Sarah Palins that are obvious. They're nothing but material for the comedian.

Q: How is Levi Johnston doing?

KATHY: Levi. My lover, Levi Johnston is doing so well that we actually went and did an episode of My Life on the D-List in Wasilla. Yeah, this isn't the [expletive] Kardashians, folks. We went to Wasilla, Alaska, or as Levi calls it, "The Silla." So we kicked it in The Silla, and Levi and I actually went to Sarah Palin's house and knocked on her door.

Q: Will there be a cross-pollination with Sarah Palin's Alaska and My Life on the D-List?

KATHY: Yes. I will actually kick her ass, and here's what I can promise you. I can promise you that My Life on the D-List will have more dick jokes than Sarah Palin's Alaska, and it will be more amusing, and yet it will be less shocking because I cannot wait to see that [expletive]. I'm sure -- she's so educated on all things that I'm sure she can -- maybe if you show her where Anchorage is on a map, she can find it. I question that, though.

QUESTION: What other guest stars are on this season?

KATHY: Oh, the guest stars are good this year. The guest stars we have -- all right. We have this one episode that I'm really proud of.

KATHY: Tom Vize was -- before he was my tour manager, he was a server because you can't say "waitress" anymore, but Tom was a waitress.

TOM: I was a waitress.

KATHY: With the most famous alumnus of all at Thank God It's Friday's, who used to work at the Woodland Hills Friday's, which was Tom's, and that was –

Q: Can you talk a bit about the pap smear episode?

KATHY: …what's so great is that this year on the D-List we also do something historic, which is I have the first public televised pap smear. Yeah. That's right. Imagine it. And it was last Friday, and we did it at the Palomar Hotel in Westwood, poolside, poolside in stripper shoes. Full-on pap smear, not acting like I got it. I mean, speculum and the whole thing.

And it was supposed to be sort of a serious episode about women's health and how cervical cancer can be prevented, and I heard all these touching stories. One woman lived in Iran, and she said, "We can't get pap smears in Iran." And another woman said her mom died of cervical cancer. So I said, "OK. Let me do this, but I'll try to put a funny spin on it." So I got vajazzled. Do you know what this is? OK. Let me walk you through it. It's when they shave your naughty parts and then…

KATHY: Oh, sorry. Waxed. Oh, yeah. Shaving -- I can never get that right. I chafe. So we went to get -- I've never been waxed before, and we went to -- what was the name of that place?

KATHY: Cocktail Wax. I'm not a spokesmodel. I'm just telling you where I went. And they waxed me, and then just for fun, we made Tom…

TIFFANY: Get his balls waxed.

KATHY: Tom got his balls waxed. And by the way, it's not even on the show. It's just something that we thought would be funny. Tom, how do your balls feel?

KATHY: The crew almost quit that day. I'm not kidding. They were so disgusted. So then they put little rhinestones all around your naughty parts, but I was afraid of them falling in. Or, you know, next time I saw Levi something would -- I would get pregnant. I don't know.

So then we did the public pap smear, and we gave the exclusives, but, by the way, you should know that I called The Today Show and said -- because Katie Couric had her famous colonoscopy in 2000, "I'd like to give you guys the exclusive, and this is really going to make the point that a pap smear is something that's so not to be feared that I'm even willing to do it on TV. It takes 90 seconds. It's painless." And I got from The Today Show what's called "a firm no." And the same thing from GMA and CBS This Morning, and basically, nobody would touch my [expletive]. Nobody wants to be anywhere near it as usual.

So we did it on My Life on the D-List, and I thought it was such a strong message, and then when the In Touch article ran, which you can see in the current In Touch, it was a picture of me in my bathing suit pulling down -- showing my vajazzling next to a picture of Heidi, and it said, "Kathy takes on Heidi." There's nothing about preventing cervical cancer. It was all about how I've taken on Heidi because I was making a joke about her gigantic knockers. So that's pretty D-List. That's pretty D-List. It wasn't Time. It wasn't Newsweek. It was In Touch, and it was Kathy versus Heidi. I'll take it. Yeah.

QUESTION: Do you choose your non-My Life on the D-List projects with an eye towards how they will fit in topically?

KATHY: Yes, absolutely. Absolutely. The show is a combination of me taking gigs that I think will lend themselves to the show and also the cameras really just following me around for 12 hours a day and hoping I say something funny. So it's a combination. So when I'm producing the show, I purposely pack my calendar with all kinds of crazy things, and then sometimes we come up with ideas.

For example, the pap smear, the genesis of that was in Season 1, I was doing a date somewhere, and then a guy came back stage and he was jumping around excited, and we were taking pictures together. And he was a gay guy, of course, and he said he's a gynecologist, and he would give me a pap smear. And ever since that guy, his name is Dr. Hong -- and ever since Dr. Hong was jumping around Season 1, we've been toying with the idea of doing a pap smear on the show. And then this year, we just did it.

Then things just happened. Like, for example, when I went to New York to do Law & Order, I really was nervous, and I really did cold-call Liza Minnelli. I mean, I know her a little bit, but I certainly don't know her well enough to call her and say, "Can I come over? Will you help me rehearse?" And she just said, "Yes." And I sent her a script ahead of time. I got to her apartment. She knew the scene better than I did.

And then later on, when you do the sit-down interviews on these reality shows, it was really funny because I got a note from Bravo where they said, "You have to re-do that interview. It's not real. We don't believe you would just cold-call Liza Minnelli and she would just say, 'Come over.'" I said, "Well, that's -- I don't know what to tell you. That's what happened." So then I got her to be on the D-List. And, you know, that was something that I hoped for on the show, and then it really, really happened.

Then… there's certain gigs that come across my desk that are so nuts that I just have to do them for the D-List. So sometimes I'll get an offer for maybe the summertime, and I'll call them and say -- when I did the gay flight to Australia for Air New Zealand, I just said, "Is there any way we can do this during D-List filming? Because it's perfect for the show," and then we got a whole Australia episode out of it. So we're always looking, always looking.
Posted by Pop Culture Passionistas at 2:00 PM