FlashForward Fans Black Out in Burbank 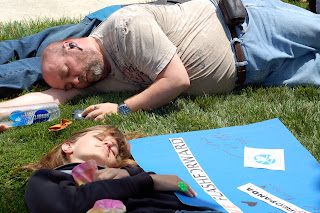 fanatics will really appreciate what went down in Burbank, California yesterday. As was the case in many major cities around the world, Los Angelenos were scheduled to band together and stage a protest outside of the local ABC network offices.

The plan was brilliant. As had happened at the beginning of the recently canceled series, all of the Flash-ers were going to experience a simultaneous two minute and seventeen second blackout - right there on the sidewalk outside the alphabet net.

As rabid FlashForward and pop culture followers, we couldn't miss out on such a unique event. So at 10:45 AM we made our way over to the designated meeting spot, ready to document the momentous event.

"Wow," we said to each other as we got closer to the Disney studios that ABC calls home, "There must be a ton of people showing up for this thing." The scene was surreal - helicopters hovering overhead, motorcycle cops blocking freeway entrances, fire truck and ambulance sirens blaring.


Read more and see video of the Burbank Blackout after the jump.
But as we walked past ABC, we couldn't find the rally. Eventually we bumped into a few FF fans (the kangaroo shirt and handmade signs helped in ID'ing symbiotic souls). But despite the chaos, we couldn't find the crowd of protestors.

That's when we got the word. An oil tanker had jack-knifed on the freeway, right near the spot where the rally was scheduled to occur. Organizers and attendees were trapped in a heinous gridlock - all too familiar to residents of Southern Cali. And the media frenzy and kicked up police interest was related to the highway oil spill.

The chaos in the usually quiet suburban neighborhood may have added a level of intensity befitting an episode of FlashForward, but it didn't rain on the devotees' parade. The Flash flock came to ABC.

And here are some things network execs should know. FlashForward fans are voracious, smart, dedicated, very nice, and really young. If the 18-49 demographic is so highly coveted, you'd be crazy to lose this FF crowd.

So why did they fight their way through bumper to bumper traffic to protest the show's cancellation? Matt MacCarthy (of the aforementioned kangaroo t-shirt) summed it up simply, "I came here because FlashForward is simply the best show on television... I don't want it to go away because it's just my favorite thing that I've ever seen."

And listen up again, ABC. It seems a lot of your fans were looking to Flash to fill that giant Lost hole in their viewing schedules and in their hearts. "I'm really just feeling a little empty after Lost

and I really felt like this was the only suitable show to take the mantle," explained Matt Owens.

Los Angeles rally organizer Sammy Knapp told us why he pulled the protest together saying, "All of us were a little disappointed when they announced the show was canceled. And then we saw the finale which didn't leave us with any closure."

When asked what could make up for that final disappointment, he added, "We want to see the series move on and continue and then get resolved."

And so they gathered a little before noon to black out. But what did they hope to see when the world went dark?

Madeline Crowley who watches the show each week with her friend Emily Honn had a very practical wish, "Let's see. Six months from today would be around December. Well, we're both going to college next year. Hopefully that would be going well."

Emily joined in with an altruistic vision, saying she'd like to see "happiness" then quickly added, "But at the same time, I don't think I'd want to see my future."

Crowley echoed a true FlashForward fan's greatest fear, "You wouldn't want to see nothing because you know what that means. Oh, man... you're a blue hand person."

Jazlyn Valencia, who helped Knapp plan the L.A. event was a little more practical when we asked her what she hoped to see, "Maybe me making some money."

While Knapp spoke for Flash fans everywhere when he spoke of his vision, "I hope to see Season 2."

See our video of the Burbank blackout below and find out how to lend your support to the cause at www.preventtheblackout.com.