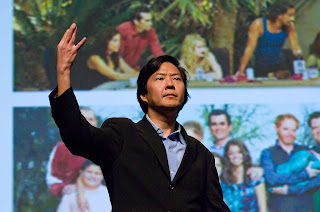 A Hollywood actor was inspired by his wife's strength and a phone company rewards good deeds in this week's inspirational Pop Culture moments.

Ken Jeong Shows His Sensitive Side

Some comedians are so quirky that it’s hard to think of them as grounded, normal people. Such is the case with Ken Jeong who has found success in recent years playing bizarre and over the top characters like the crazy gangster Mr. Chow in The Hangover

and the sadistic Spanish professor Señor Chang on Community.

So when Jeong bounded to the stage at Sunday night’s MTV Movie Awards to accept his golden popcorn statuette for Best WTF Moment, we anticipated the usual hi-jinks. We were shocked with Ken got emotional talking about his wife, Tran Ho, a breast cancer survivor.

Jeong credits Tran with inspiring him to follow his dreams. You see Ken started off on a very different career path than you might expect. After graduating high school at age 16, he got his undergrad degree at Duke University and then went on to med school at the University of North Carolina at Chapel Hill. While working on his stand-up routine in his spare time, he did his residency in Internal Medicine at New Orleans’ Ochsner Medical Center.

But his wife’s cancer diagnosis clearly had an impact on him. At the Awards ceremony, a tearful Dr. Ken finished his speech saying, “The reason why I did this, she taught me that life is short and that don’t be afraid to take chances. And I just wanted to say that Tran has been cancer-free for two years. I love you!”

Heartfelt moments can come from the most surprising places.

Find out volunteering can pay off for Lady Gaga fans at Beliefnet's Idol Chatter.
Posted by Pop Culture Passionistas at 8:33 AM