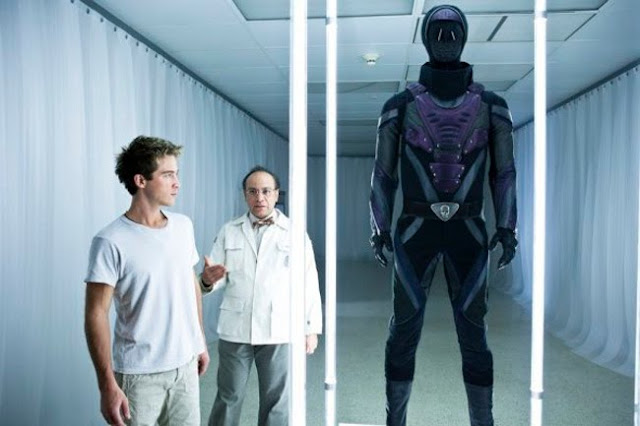 This Sunday, June 20 at 7:00 PM, the Syfy channel is premiering a new mini-series version of the comic book classic The Phantom. You might recognize the star, Ryan Carnes, from Doctor Who (as the human/pig slave Laszlo) or Desperate Housewives (playing Andrew Van de Kamp's first gay love interest, Justin).

But this weekend he takes on a new and daunting task—super hero. In a recent conference call interview we talked with Ryan about the changes they've made to the character—especially the trademark purple suit—and how he made the role his own.


Q: Have you always been a comic book fan?

RYAN: I actually have to be honest. I wasn’t as a kid. I wasn’t into comic books. I was more into sports and music and stuff like that. I was outside a lot. I grew up in a really small town kind of on a farm and in the woods so that occupied most of my time. But I think it definitely has been a dream of mine as an actor to be able to play a super hero at some point. There’s so many more super hero movies and comics being turned into movies now. It was awesome. It really was like a boy’s dream come true.

, I had heard of The Phantom. I was somewhat familiar with The Phantom though I can’t say that I was a loyal fan who had followed it. So when I got the audition for the project I did some research and then once I got the part then I dug in and did a lot more and found out a lot more about Chris and Kit Walker and The Phantom.

Q: Since this is a re-imagining, did you look at the comic strips or the previous movie version of The Phantom in preparing for the role?

RYAN: I did both. I screened the movie from the ‘90s with Billy Zane. And I only wish we would have had the budget that they had for that movie. We would have shot for six months instead of two. I went back and I looked at some of the old comic strips, and I looked online. I researched the history of the character. But at the same time I was cautious with myself to not get too caught up in… "I have to make sure that I do this, this, this, this," and this because it was a re-imagining and it was a very new take on an original series. And I wanted to be able to still make my own choices and my own conclusions based upon what was on the page for me in this project.

Q: Since comic book fans can be very unforgiving, did you feel any pressure stepping into this role?

RYAN: Actually I didn’t really allow myself to entertain those doubts. When I got cast in the role I didn’t go online, which I don’t anyway. I make it a habit to not go online and read what people say about me or the projects that’s I’m in. I let that stuff be filtered through the team that’s around me. I trust them to inform me of what I need to know. So before I went into it, I didn’t go online and see what people were saying. I just didn’t allow myself to go there because… that’s a good way to kill the art and to kill a performance by being affected by what people think and what they’re saying about you or the project or the role. So quite honestly, I can’t say that it affected me at all. Of course inherent in being number one on a call sheet and being the lead in a franchise like this, sure there’s some pressure. But I just chose not to go there.

Q: How does it feel to put on that new suit as opposed to the famous purple suit?

RYAN: Well I’ll tell you what, this is a point of great contention among the fans. I think I’ve gotten the impression that they really, really loved the old suit. I’ve never put on the purple spandex so I can’t speak as to how that feels. I would imagine it feels tight and vulnerable. But I can speak to how it felt to put on the new suit and that was really cool… There was a process in terms of when I first arrived in Montreal, going to the fittings and all that with the costume designer, and so I knew what I was in for. But it wasn’t until I finally actually put the whole thing on that I went, "okay wow, this is pretty rad, I could get used to this."

And it changed actually. It evolved through the course of the shoot because in the beginning it was very tight and restrictive… Because of some of the stunts and some of the choreography that I was doing, I actually wore it for rehearsals for the martial arts choreography so I could break it in because it was so restrictive.

So it was really cool. I’ve never gotten to wear anything like that before and it’s not what you get at the Halloween costume store for dress up for Halloween, that’s for sure. It’s a little fancier than that.

Q: Aside from the suit, which changes to the character did you find most interesting?

RYAN: In terms of the things that have been on the screen, like compared to the movie of Billy Zane, I found it interesting that they chose — because this was an origin story — that they chose to make The Phantom younger. And I mean this was a kid who was in law school so he’s somewhere between 22 and 24, assuming that he went straight to law school after undergrad. That’s young. That’s much, much younger than the Billy Zane character was.

And I found that interesting because that is a time of great transition in any young man’s life… It’s not like you’re 35 or 30 and you’re beginning to figure out life a little bit maybe. When you’re 22 you have no clue or at least that was my experience. And so I thought it was really interesting to make that choice to just throw this kid in front of the bus really. You thought you knew what you were going to do with your life sort of. Now you have no idea. Now let’s see how you rise to the occasion. So that to me that was, I think, the most interesting departure.

Q: Since your version of The Phantom is the only one to begin the story without the benefit of a life of training, how did that help you develop the role?

And I just think that… in terms of the character, he doesn’t know what’s coming at him, it grounded my performance in a certain reality… There were times when I just said, “I don’t know. I don’t know, what Kit is feeling right now. I don’t know. I have no idea.” And Paola [Barzman, the director] said, “Well I think that’s good because, you know what, I don’t think he does know and he has no idea of that scope of what is happening to him. His life has been turned upside down.”

Q: Is there one particular thing that was your special contribution to this iconic role, one thing that made the role your own?

I think one thing for me that I really wanted to maintain I guess in this character was his sense of irreverence at times as Chris. At the core he was an irreverent guy, but there was something about him that really wanted to rebel against who he was... That's a little bit of a counter culture rebellious type activity that guys engage in -- or girls… I was really insistent upon keeping my tennis shoes untied as much as I could because to me Chris wasn’t the type of guy who would have his tennis shoes always tied up perfectly. He was the guy who would walk around with his sneakers untied so he could just kick them off whenever he wanted. It was a small thing but for me that really helped ground the character in the way that I saw him.

Q: What would you tell fans that might be staying away from this version because of the differences?

RYAN: Well I guess I would really encourage them to try to go into it with an open mind and attempt to allow themselves to surrender to viewing something that is in some ways an entirely different story. And that yes, it is the same story. It does carry the title of The Phantom. Many of the things are the same, but we really were going out trying to re-imagine a story and tell it in a slightly different way and take some risks. So I would just encourage them just to surrender to what they might see and see if they don’t enjoy it.