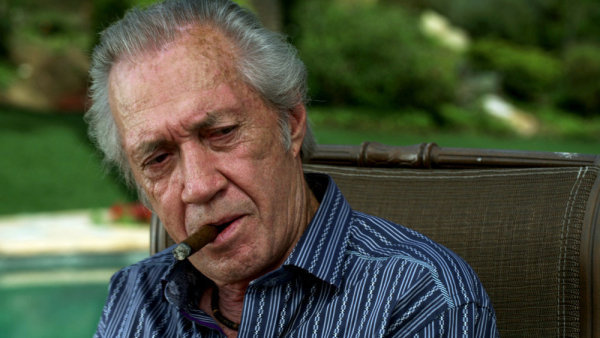 This weekend the Syfy channel aired the latest Roger Corman creation, Dinocroc vs Supergator. The movie was the inevitable combination of Dinocroc

and Supergator, the two past films made by the legendary producer for the network. Corman, often called the King of the B-movies, is best known his low budget sci-fi flicks, but he also has had mainstream success with his Edgar Allen Poe movies, including The Fall of the House of Usher

, Children of the Corn

, and Rock and Rock High School

With an astounding 550 films under his belt it's no wonder the Academy honored him with a Lifetime Achievement Oscar in 2009. But his one work is just part of the story. Throughout the course of his 50-year career, Corman has launched the careers of many of today's Hollywood elite.

We recently spoke on a conference call with Roger who talked about the people he has influenced, what filmmakers have influenced him, and the legendary David Carradine.


Q: Are you more proud of your own resume or all of the other successful filmmakers that you've inspired over the years?

ROGER: I'm proud of them all. I'm pleased, more or less pleased with what I did as a director and, of course, I'm delighted with the number of directors who started with us, not only directors, but actors, producers, and writers.

Q: The late great David Carradine was in Dinocroc vs Supergator, one of his last films, can you talk a little bit about working with him?

ROGER: Well, we've worked with David Carradine on and off since the 1970s. The first picture he did with us he starred in, which was Death Race 2000, which was one of our bigger hits. He followed that with Death Sport and then I don't know how many pictures we've made together. And he was a logical choice for the billionaire financier of the research that created the Dinocroc and the Supergator and so we just went to him as we normally do.

Q: You're a great inspiration to a lot of filmmakers in modern film today. Who are some of your sources of inspiration that might have influenced the way you do your films?

ROGER: There was nobody in particular that I can point to. I can point to a few directors when I was very young that I admired. I would probably say Alfred Hitchcock, John Ford, and Howard Hawks… whose work I liked very much. And probably the one, if any one influenced me more than the others, it was probably Hitchcock.

Q: You've mentioned all of the people that you've worked with in the past who have become big stars. We're wondering if there are any young actors or directors that you worked with recently that you think have the potential to rise to that height.

ROGER: I think Declan O'Brien who did Sharktopus definitely has the potential. We have a number of good directors. Jay Andrews who did Dinocroc Vs. Supergator and… Kevin O'Neil who did Dinoshark I would mention also. I would say probably those three. Oh, Timur Bekmambetov. He is a Russian director who did his first picture for me and followed it up by doing the biggest grossing picture in the history of Russia and he came over here and I've forgotten the name of the picture. He did. It was a big action picture. He's on his way to being a major director. Matter of fact, he is already. He did a picture called The Arena for us.

For more of our Roger Corman interview check out Suite 101.