10 Random Thoughts about the 2010 Emmy Nominations 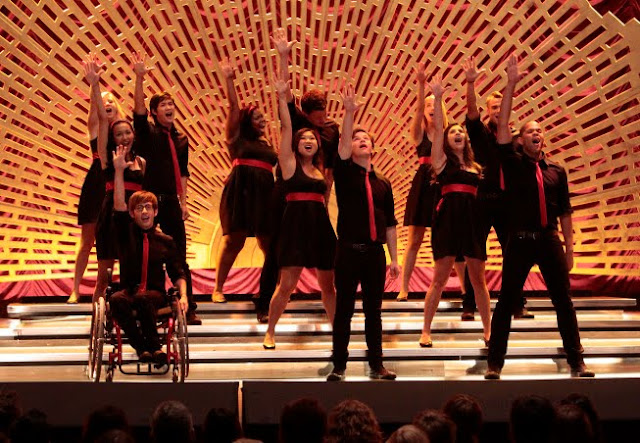 In what we think has been the best year in television quite possibly in decades, it's hard not to be excited for the announcement of this year's Emmy nominations. And while some of our favorites were missing from the list we think many categories could have been expanded to ten nominees (like the recent best feature film Oscar move) and still not pay homage to all the great work done this season.

So without further adieu here are our random thoughts on this year's Emmy nominations:

dominates. With 19 nods, it was the most recognized series this year. Of course, Lea Michele and Matthew Morrison landed in best actress/actor categories and Jane Lynch made the Supporting Actress list. And it was no surprise either that both Neil Patrick Harris and Kristin Chenowith got nods for guest spots. But, the best and biggest surprise was not only that Chris Colfer was recognized for his heart-wrenching portrayal of Kurt but that Mike O'Malley got a guest actor nomination for playing his dad. We think their scenes we the best of the season.

2) Betty White proves that Hollywood is not completely ageist. Everything Betty touches these days turns to gold. Not only did she get a nod for her turn hosting Saturday Night Live

, but that episode also received six other nominations including Writing, Directing, Hairstyling, Makeup, Lighting Direction, and Art Direction for a Variety Series. Plus, her Super Bowl Snickers spot made the list of Outstanding Commercials. Not bad for an 88-year-old broad.

3) Coco gets the last laugh. Letting Conan O'Brien go may just be NBC's biggest regret this year, especially now that he was just nominated for FOUR, count 'em, FOUR Emmy awards. He made the list of Outstanding Variety, Music, or Comedy Series, plus he got nods for Writing, Directing, and Art Direction. And how many did Jay get? None. Take that Leno.

4) The Ed O'Neill Emmy curse continues. While we are thrilled that five of the six adult leads in Modern Family

were nominated, we are pretty sure that Jesse Tyler Ferguson, Eric Stonestreet, and Ty Burell will most likely just cancel each other out for the statue. And we can't be more excited that Fred Willard got a nod for Guest Actor, but the burning question is "What about Ed O'Neill?" Not only is he brilliant as the leader of the Pritchett clan, but he's owed an Emmy or two for never having been nominated for Married... with Children

again? Kathy Griffin is up for another Emmy for My Life on the D-List

. She just has to tell Jamie Oliver and the Undercover Boss to "Suck it!" And if D-List doesn't win she still has a shot at Best Editing for her Balls of Steel special.

6) How does a show get nominated for Best Casting, but none of the actors gets a nod? Take, for example, True Blood

. It made the Best Casting List but no individual recognition for Anna Paquin, Stephen Moyer, Alexander Skarsgard, or any of the outstanding supporting cast. This has happened in the past before (most notably to fan favorite Friday Night Lights

, which thankfully got a few nods this year). Makes no sense to us.

7) And while we're on the subject of snubs... No Community

? No Joel McHale? No Chevy Chase? No Danny Pudi? No Ken Jeong? We get that it was a full season, rich with great comedy, but Community should have received a little recognition.

8) And another thing... We promise we won't go on too long about snubs, since really, there were just so many great shows and performances to choose from, but we were more than disappointed that Rescue Me

was missing from the list as well. OK, it got a nod for music (for those great dream sequence dance numbers), but Denis Leary had his best season to date, yet no nomination. Not to mention Callie Thorne's gut wrenching 9/11 meltdown or Lenny Clarke's gun wielding tirade—both Emmy worthy moments.

era. While the Tina Fey/Alec Baldwin classic still got 15 nominations this year, we're thinking that the dominator for the past three seasons is about to be de-throned by Modern Family and Glee. Let the comedy battle begin.

but not forgotten. For it's final season Lost wracked up a whopping 12 nominations including Outstanding Drama Series, Lead Actor (Matthew Fox), Supporting Actor (Terry O'Quinn and Michael Emerson), and Guest Actor (Elizabeth Mitchell). And while we think the series deserves some farewell fanfare, what about the actors in some other shows that left us this season, like Ugly Betty and 24?
Posted by Pop Culture Passionistas at 8:43 AM