The Fabulous Beekman Boys Talk About Their Relationship 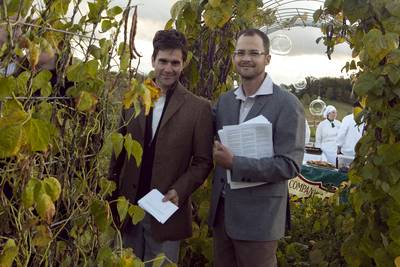 No kids like to watch mom and dad fight, but we can take it when Brent Ridge and Josh Kilmer-Purcell go at it on The Fabulous Beekman Boys, because we can tell how much they truly love each other.

Sure, they’ve got different personality types and ways of dealing with stress. But the real crux of their squabbles seems to rest in the fact that they’re separated as they pursue their ultimate dream–to be together at Beekman Mansion full-time.

We spoke with the bickering Beekman boys recently about how they met, whether or not they had trepidations about airing their dirty laundry on TV, and what they’ve learned about each other out on the farm.


PASSIONISTAS: How did you two meet and start dating?

JOSH: We met online, ten years ago. It was an online chat room type thing... very early internet dating. And Brent and I were chatting. And we chatted for three or four hours, and I remember, he had never been on a date with a guy before. And I kept asking him out during the chat and he wouldn't go, wouldn't go, wouldn't go. But he did reveal over the course of the chat the neighborhood that he lived in which was in Washington Heights. And before we logged off, I told him, I said, "Tomorrow night at eight o'clock I'm going to be at the subway stop near your house. And you're either going to be there or you're not.” And he was.

BRENT: That's a good question. The answer is actually no. We work with a very small group of people. The crew is only seven or six. We're filming today so the director is sitting right beside me. So we know them really well. By this point they're our friends and we see them more than we see our families. And so we feel very comfortable having the conversations that we have in front of them. And we've watched reality television for the past decade as well, and we know what's interesting and what's riveting. And that's seeing people's real lives play out. And first and foremost if we're going to do a show, then we want it to be the very best show that it can be, entertaining, educational, inspirational, and what people want to watch. And we know people are interested in that. People want to see how other people relate. They want to say, "Hey my life is like that too."

JOSH: And if there's one thing we've learned, the worst thing you can say is "turn the cameras off" because that will just about guarantee that they stay on.

PASSIONISTAS: What's the most interesting thing you've learned about each other since you've moved to the Beekman?

BRENT: I think that we've been in a ten-year relationship. I think that's technically classified as long term. And I think over that period of time you start taking your spouse or your partner a little bit for granted. And you don't show them how much you appreciate them or you may be too casual with the way you talk to them. And I think that the separation that we've experienced over the past year, year and half now, and certainly doing the show, has made me realize some of those things. That I was a little bit too cavalier with my, I don't want to say insults, but with my demands. It's like having a mirror up all time. We've gotten a lot of comments from people, "Oh they fight so much." But I would say to you that probably a lot of couples fight a lot and probably don't realize how much they fight and wouldn't until they had a mirror turned on them.

PASSIONISTAS: I'm sure it's the editing a bit, too, right. They want the drama.

BRENT. Sure. Those are the interesting conversations.

PASSIONISTAS: And Josh, what about you, what have you learned about Brent?

JOSH: What's been surprising to me is actually his business. How great he is at business. I've been in advertising for 15 years now and I've worked with some of the top companies in the world. And when Brent started really running a business, there's a lot of times when he would come up with an idea and I would think, "There's no way in hell that he was going to be able to make that work." And he'd pick up the phone and just relentlessly make calls until he made his vision happen. So I've been really impressed with what he's been able to accomplish in the last year.