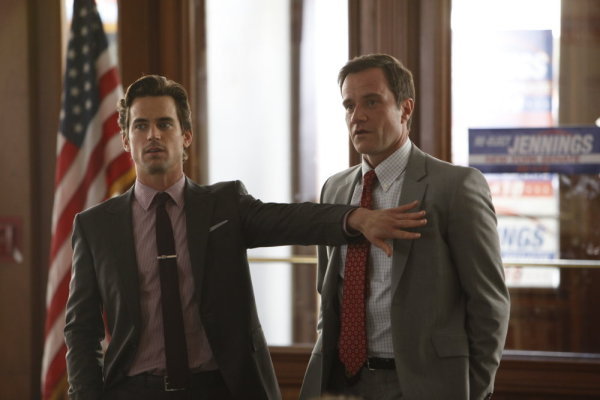 The second episode of Season 2 of White Collar

airs tonight. Last week we found out Kate was dead, Neal was in jail and then out again, Mozzie and Peter are going to be working more closely together, and Tim Matheson is a great guest star.

We spoke with White Collar leads Matt Bomer and Tim Dekay about Season 2. Their camaraderie and mutual respect shows through in the interview through their playful banter and professional attitudes. Here's what they had to say on Neal and Peter's evolving relationship, Kate's untimely death, more Mozzie involvement, and some new cast members.

Q: Matt, how is Neal dealing with Kate's death?

MATT: What I think those particular events sort of set in motion this season is that Neal’s big struggle is between doing what’s legally right and what he thinks is just. So his big struggle this season in terms of avenging Kate’s death is whether to do the right thing legally or what he feels is right and just.

Q: How do you see Neal and Peter’s relationship shifting and evolving now, especially with the changing dynamics with Kate, and even with Mozzie having a little bit more of a role?

But I think that’s to [Executive Producer] Jeff Eastin’s credit... people have said, “Oh, this is a buddy-cop relationship that these two have.” I think yes, it is. But, I think it’s much more than that and that’s because Jeff Eastin has said, “No, no, no. I want it to be more than that.” And I think he’s written something more than that.

MATT: I would echo that sentiment and just say yes, it’s about two guys who have a mutual respect for each other, who have a lot of differences but who compensate for each others' differences in interesting ways, and who always end up, at the end of the day, having a pretty good time together. But the one dynamic that’s always shifting and changing between our relationship and between the series at large is that of trust.

Q: If your character's were put on a stand and asked to be a character witness for each other, what would you say?

TIM: It’s going to seem odd, but this is my first instinct and I think I have to go with it. One is—smartest individual I’ve met. And two, one of the most devoted… Oh my gosh! I think because of this question, I’ve hit something here that I think that Peter sees in Neal; that he respects and adores, for lack of a better word.

MATT: Oh. We’ve got to do these blogger calls on a more regular basis.

Q: What about the other way around? What does Neal think?

TIM: He’s slept with every single woman in the bureau.

MATT: One lady to the next, Peter. I would say that Peter is incredibly intelligent, dedicated, devoted, a family man. I mean, he has the white picket existence that I completely admire and respect and wish that I could have, but don’t really ultimately believe that I can.

MATT: And he puts up with my bull….

Q: What is it like having Willie Garson (Mozzie) in more scenes and working more with Peter this season?

TIM: Yes, he is. It’s great because—I just love the relationship of Peter and Mozzie. He’s this nuisance, but we need him every so often, and he’s good to go to. And he’s also one of these guys who... goes above and beyond every so often, and Peter hates to say it, but he says thank you to him.

And here’s the other thing about the world of White Collar is that even though Mozzie is a conspiracy theorist and there is a combative element between Mozzie and Peter, never, never, never would Peter ever not trust him... There isn’t that element of violence, and because that element is not there between certainly Neal and Mozzie and Peter, it gives it great flexibility. It gives that relationship a great flexibility. Peter’s never worrying, “Oh, Mozzie might draw a gun on somebody.” That’s just not there. And because of that, you’ve got much more leeway in the relationship.

MATT: I think Willie is great and fun and he always brings something extra to the role, and it’s been fun for Neal to get to bridge two worlds that were very different for him in the first season, and to see people who he respects and admires and likes working with in two very different ways, come together and sort of being the intermediary in their dynamic at times, and also watching them get along famously at other times.

Q: Do you always know which plot twists are coming ahead of time so you can play that, or are you in the dark?

TIM: Jeff Eastin is good in that he’ll tell me a plot twist that’s coming up if he thinks it would be something Peter would know ahead of time, and if it’s something that would be a surprise to Peter, I’ll tell Jeff, “Oh, don’t tell me. I don’t want to know.” And then it’s exciting to read it and exciting to play it. This one kind of came up on me, the one for the mid season, only because I think we’ve been so entrenched in shooting these first eight episodes, that when I got the next episode—Oh wow! Oh right, this is the mid season, and then it was a page-turner, I have to say.

MATT: I like not to know unless it’s something that I need to know specifically for how I color a performance, but at the beginning of the year, basically I just talk with Jeff and say, “What’s the overall motivation for Neal for this season?” And then we go from there, and I get pleasantly surprised when I get the script, five minutes before we shoot it.

Q: What do you think about the payoffs and the quick reveals for the White Collar audience?

MATT: I love that Jeff Eastin answers the question he asked in the first episode... There were big payoffs and I think TIim and I were both were looking at each other going, “Where are we going to go from here?” But then we did, and now we’re at the mid season finale this season going, “Oh my God! Where are we going to go from here?” So, fortunately we have a great writer in Jeff Eastin who likes to answer the questions he presents pretty concisely and pretty briefly, so I’m just happy to be along for the ride.

Q: Can you tell us about the new additions to your cast?

MATT: Yes. We’re very excited about that. First of all, we have Marsha Thomason back on a regular basis, which is wonderful. She’s a fantastic actress and gorgeous and so great to have on this show. And then we have Hilarie Burton who makes a recurring guest arc this season as… from my character’s eyes… a high class repo man, an insurance repo man, who’s basically out to settle an old score between herself and Neal. So it’s kind of fun and contentious and slightly flirtatious and all those things, hopefully.

Q: Matt, Jeff Eastin teased us that you and your fabulous co-star, Diahann Carroll, would be singing on an episode this season. Has it already been shot and what can you tell us about it?

MATT: He teased me too. I’ve heard rumor. It would be an honor. She’s a legend and it’d be really, really fun to get to do something like that. I have no idea if it’s actually going to come to fruition. We still have eight episodes to find out or seven episodes to find out. So I guess as soon as I know, I’ll let you know.

Q: Tim, in episode two of season two, there was that running gag about you and the mustache. Was this the creation of the writers, or did you just show up one day a little fuzzy and inspire the episode?

TIM: Yes, I showed up—that happens a lot. I’ll show up fuzzy and it will inspire people. No. It was completely by Jeff. I honestly think the twisted mind of Jeff Eastin thought, “Oh, I bet DeKay would look goofy with a mustache. Let me write that.”

To find out more about Matt Bomer and Tim DeKay off-screen, read the rest of this interview at Suite101.com.